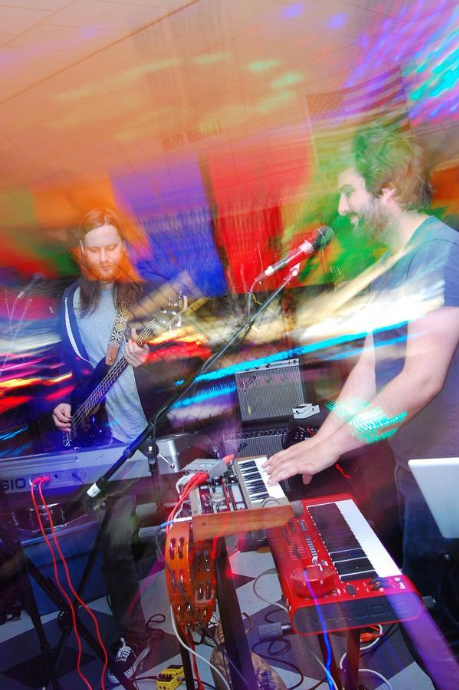 I Never Thought We’d Know Each Other: A Look at the History of Cubscout and the Rhinoceros

It would be coy to say that Cubscout and the Rhinoceros’ Kemper Blair and Stuart Holt didn’t have a history together. Their involvement in the Richmond music scene is unprecedented. It seems appropriate to take a walk down memory lane in Holt’s Oregon Hill backyard.

It would be coy to say that Cubscout and the Rhinoceros’ Kemper Blair and Stuart Holt didn’t have a history together. Their involvement in the Richmond music scene is unprecedented. It seems appropriate to take a walk down memory lane in Holt’s Oregon Hill backyard.

Early on in their formative years, the two instantly clung to one another. They became best friends and discovered a common link through a mutual love of music. Although they started several bands all throughout high school, they both felt like they started their first “real” band while in college. This band was called Rabbits.

For a lifespan of only a year, the group had numerous member changes. The band hit its stride when guitarist Christopher Dustin Smith joined the group. The songs became stronger and the band helped introduce the scene to the three. Their most memorable show may have been an appearance at the first annual Ghost of Pop festival. They played alongside The Rachel Nevadas, A Roman Holiday, The R.I.P. Off and numerous others. Each show could have easily been the Rabbits’ last show and eventually that last show came and went.

Smith went on to join Prabir Mehta with his new project, Prabir and the Substitutes. Blair and Holt started talking to like-minded musicians in the area, mostly over drinks at the Ipanema Café. After a few drunken conversations with Jason Detzel and David Rohrer, the Dead Goats came into fruition.

After a few early shows in, they added the showman talents of Chris Ramming and the band really took off. There was a point where every Dead Goats show got better and better and it seemed like they were the talk of the city. Whether it was being shut down by the cops for being too loud at Gallery5 or opening for the Duchess of York at Toad’s Place, the band left a legacy that wont soon be forgotten.

At this point of the story, you might think that this is when Cubscout and the Rhinoceros began. That simply wasn’t the case. During the creative years of Rabbits and the Dead Goats, Blair and Holt spent many nights recording songs together. Holt comments on the departure of sound between each respective musical project:

“Basically, we had these other two bands that were more rock n roll, like drums, bass, guitar. I got really into trying to create music on a computer. Between computers, synthesizers and drum machines, we would just periodically record tracks. We never really thought anyone would hear these songs. For the most part, we were writing a lot of songs that we really enjoyed, but they never really worked for the bands we were in. It was a mix of something electronic and something acoustic and it was just about trying to write songs that had a certain style.”

The songs that appear on their debut full length Greetings from Holly Street Park span five to six years. The collection could be considered more of an anthology chronicling the electronic pairing of the two. There are indicators throughout the release in quality as well as examining the technicalities of particular songs. In these technical moments, you can see the growing talent of Holt behind a computer screen and becoming more comfortable with his electronic expressions in the material. It’s also amusing to place the full-band rendition of “Yer Ma and Pa” against the acoustic performance found on Cubscout and the Rhinoceros’ record.

With the expanding musical prowess of the group, they are already working on new material. Considering the nature of their recording methods, the group finds it easy to continue compiling a collection of music at a quick rate. The true excitement lies in how Blair and Holt are still in the discovery stages of the project. With the first record, there were no limits to experimenting with a variety of instrumentation as well as genres. Keeping that idea in mind, the two continue to indulge in the wealth of ideas that both of their musical minds come up with. The ideas range from the use of single acoustic instruments to the multiple layers of synthesizers that help produce an identity for each song.

In order to perform the songs live, their setup consists of a drum machine, three keyboards, a bass guitar, two vocal microphones and a tambourine. They both feel that the door is wide open for expansion. Beyond the live performance aspect, the new record promises to incorporate more live drums, organic instruments and so on. They are finishing out the year by continuing to play live and dropping another release. Whether that release is an EP or a full length has yet to be determined.

When it comes down to it, the musical partnership of Holt and Blair makes perfect sense. They both understand each other on a personal and artistic level that is enviable. Some might call it a match made in musical heaven. By listening to the songs of Cubscout and the Rhinoceros, a running theme to the material becomes apparent. The songs are about friendship and the good times attached. For the two, I hope the good times continue to roll.

Come see Cubscout and the Rhinoceros live for yourself at Gallery5 on Monday August 10th, 2009. They will be taking part in the Monday Night Moving Pictures and Music event with Hot Lava and The Native Young.

For more information about the band and selection of songs, please visit their myspace page at www.myspace.com/rhinocerosrva

They also appear on the new RVA Mag Comp, Irregular Broadcast. Listen to it NOW!