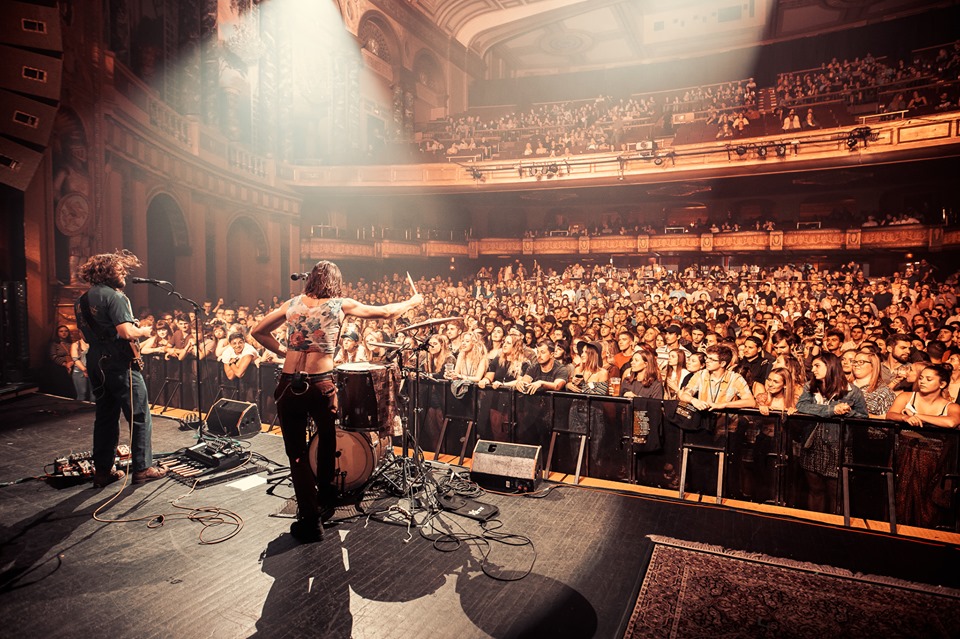 Earlier this month, Harrisonburg duo Illiterate Light released their debut album on Atlantic Records. But success hasn’t made them forget their Virginia roots.

Since we last spoke with Illiterate Light in February, they have been reaching milestones and creating friendships along the way in ways they could have only dreamed of eight months ago. The Harrisonburg, Virginia natives have reached new heights since then, spreading music across the states like lyrical, modern rock Johnny Appleseeds.

On October 11th, Illiterate Light — the duo of Jeff Gorman on guitar and Jake Cochran on drums (they both sing) — released their self-titled debut album on their new label, Atlantic Records. The step into life with this major label has brought about new challenges for the guys, as well as teaching them how streamlined and exciting large-scale creating music and touring can be.

“It’s the big shift — when you go from recording yourself to working with people that really know their stuff,” said Gorman. “In the era of the digital recording world, you can get lost in the creative process. Because it’s really easy to make a mistake, hit command and redo, looking for the perfect thing. And you can lose the essence in that.”

By contrast, recording under the auspices of a major label is very different. “It’s a bit more streamlined and there’s a flow to it now, because we’re not overthinking everything,” Gorman said. “We’ve had a lot of encouragement and support from people that are wiser and smarter than us, who are just like, ‘It sounds great. Let’s move on to the next thing.’ And that’s been a real learning curve.”

For the guys, it’s been nothing but gains in signing with Atlantic, from deepening their recording knowledge and ability, to expanding their audience reach and touring horizons. They’ve enjoyed the little perks as well.

“Shout out to Atlantic for helping me buy a lawn mower!” said Gorman.

The new album is self-titled, and features songs that have spanned four years of their creative growth. It’s a mix of tracks that had been recorded prior and tracks the duo held close in their pockets, playing them live occasionally and just waiting for the right time to release them. The decision to make the album self-titled was motivated by the desire to recognize their growth together under the name Illiterate Light as its own entity, and honor that experience.

“Some of these songs are the first songs that we ever wrote together, that didn’t make it onto other pieces,”said Gorman. “Then it’s stuff [written] while we were still just transitioning from working on the farm here in Harrisonburg, everything from that era of our life, all the way through to three or four months ago, in-between tours. I think self-titled albums are a cool way to kick off into the world.”

And kick off they have. While the move to Atlantic has been a big deal, they’ve kept their feet planted, literally — both members stand to play their instruments — refusing to let new recording opportunities make them lose touch with their roots.

“We decided to record in the same format as we played live. And so that that kept our sound consistent between the stage and the album,” said Cochran. “It felt really good, because it’s clearly us. Some self-recorded stuff that we had released in the past, we really liked, but it didn’t quite feel like we were capturing what we really sounded like.”

In the same way they haven’t lost touch with their musical roots, they always know they have roots that can easily be reconnected back home in Virginia. After touring for months on end with bands like Rainbow Kitten Surprise and The Head and The Heart, the guys returned to their hometown, Harrisonburg, the night before this interview, happy to have some time with friends and family, driving the streets they missed dearly while away. Now they’re looking forward to reconnecting with Richmond as well.

“It’s truly exciting that we’re going to do the show on Thursday. We’re gonna get to reconnect with all these friends and bands that have been a big part of our story and have integrated us into the Richmond music scene over the last few years,” said Cochran. “We’ve been so focused on being out, that coming back to Harrisonburg and to Richmond feels like a really special moment. I’m gonna be in Richmond hanging out with my family, and I’m looking forward to calling up some friends, getting to grab a drink and catch up, before it dips back to crazy on Thursday.”

To expand their musical endeavors beyond the album itself, Gorman and Cochran have also been investing back into the community they come from in a number of ways. The most notable was a visit to their alma mater, JMU, where they were able to guest-teach some of the same music classes they took when they were students. The morning of this interview, the guys had been visiting campus to talk with students about music — from both the artistic and business sides.

“It’s not like being in a business finance class or looking at spreadsheets, where there is an objective truth to everything you’re doing,” said Gorman. “They’re able to break that barrier — which is just so helpful as an artist, to be able to talk about your art in an objective way. Just to be a part of that process with them is really special.”

The guys have also worked with Pale Fire Brewing Co., a Harrisonburg-based brewery known for music themed drinks, to put together a beer dedicated to the crazy, fun spirit of the new album, and Illiterate Light’s journey in general. The resulting Illiterate Light Pale Ale will be available to those attending their show in Richmond on Thursday.

“We’ll be able to drink our own beer while we’re playing our shows, which will be pretty cool,” said Gorman.

Moving forward, the guys have big goals and fun plans for the upcoming years. In their efforts to maintain their roots on tour, they hope to encourage and practice a more sustainable lifestyle on the road.

“It’s probably one of our biggest struggles as a band, and we’ve had a few conversations recently,” said Gorman. “We were on a panel at Bonnaroo, and there was a gal there that was working with a bigger climate justice organization. I just posed the question to her, like: ‘Hey, here we are, version 2020. What is modern touring going to look like in 2035, and how can bands start to make the change to start living in that way?’”

It’s Illiterate Light’s goal to give back more than they take, and maintaining their morals and spreading positive change is just as much a part of that as continuing to make rocking music that vibes with everything they stand for.

Illiterate Light’s self-titled debut album is out now on vinyl and CD, and is available on all major digital platforms, including iTunes, Spotify, Amazon Music, Apple Music, and more. To buy it or find it on your favorite streaming service, go to illiteratelight.lnk.to/LP.

An Oasis Of Music In A Desert Of Silence

RVA Mag wanted to find out how local venues are surviving during the ongoing pandemic. In the first of a multi-part series of articles, we... READ MORE

An Oasis Of Music In A Desert Of Silence

RVA Mag wanted to find out how local venues are surviving during the ongoing pandemic. In the first of a multi-part series of articles, we... READ MORE