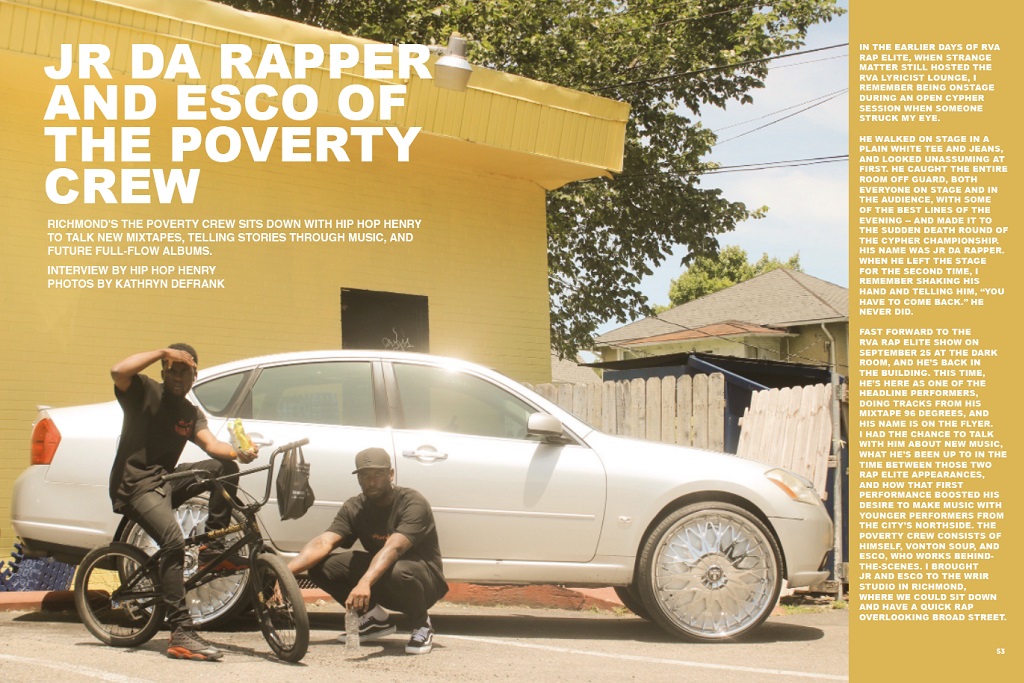 RVA #39 is on the streets now! Here’s another article from the issue, in which JR Da Rapper and Esco of The Poverty Crew in Richmond sit down with Hip Hop Henry to talk new mixtapes, telling stories through music, and future full-flow albums.

In the earlier days of RVA Rap Elite, when Strange Matter still hosted the RVA Lyricist Lounge, I remember being onstage during an open Cypher Session when someone struck my eye.

He walked on stage in a plain white tee and jeans, and looked unassuming at first. He caught the entire room off guard, both everyone on stage and in the audience, with some of the best lines of the evening — and made it to the sudden death round of the Cypher Championship. His name was JR Da Rapper. When he left the stage for the second time, I remember shaking his hand and telling him, “You have to come back.” He never did.

Fast forward to the RVA Rap Elite show on September 25 at the Dark Room, and he’s back in the building. This time, he’s here as one of the headline performers, doing tracks from his mixtape 96 Degrees, and his name is on the flyer. I had the chance to talk with him about new music, what he’s been up to in the time between those two Rap Elite appearances, and how that first performance boosted his desire to make music with younger performers from the city’s Northside. The Poverty Crew consists of himself, Vonton Soup, and Esco, who works behind-the-scenes. I brought JR and Esco to the WRIR studio in Richmond, where we could sit down and have a quick rap overlooking Broad Street.

Hip Hop Henry: So what exactly is The Poverty Crew?

Esco: Poverty isn’t just a record label. It’s a movement that’s [using] music to bring something greater to the city. We’re tapped into local politics to know what’s going on, because at the end of the day, it’s our city. We’re fighting for a better city. It’s not a music group out here to make a bunch of money and flex on people. It’s more than that.

HHH: JR, how did you and Esco meet?

JR: Vonton and I are cousins, we grew up together. I was rapping in elementary school, but I was the only one rapping. I took a break when I got to high school and moved to a different school, I hadn’t seen him for a minute. Von ended up moving around my way, and we started linking back up. They had a studio at their crib, and they were rapping now — so I said, “Damn, niggas remember me as the rapper, and now y’all have a studio at the crib. Y’all are freestyling every day.” So I started going over there, getting situated again, and that’s where I met Esco.

Esco: Vonton was saying his cousin rapped. I blew him off, because everybody wanted to come in and rap — half of the hood would come. People would come from Fulton to Northside just to rap. I think I walked in one day, and JR was freestyling. I said, “Man he hard, that’s your cousin? Tell him to come back over.” He wasn’t really trying to come back, but I said “You need to get him back over here, he needs to keep coming.”

HHH: Not showing back up reminds me of his Strange Matter performance when I first saw him. How did that appearance in the Cypher happen to begin with?

JR: That was my first performance. That was the first time I really ever rapped in front of niggas I didn’t know. I was already thinking, “Eh, I wonder how motherfuckers that aren’t around me every day are going to feel.” That reaction was definitely what I needed to take it seriously. People really fucked with me, genuinely. I needed to start going to a studio — when I rapped at Rap Elite, I had still never been to a real studio. You know what I’m saying? We do our little shit at the crib. We might make a dub tape, throw some plugins here and there to make it listenable… but I had never been to a studio and published a record out.

HHH: What I notice in your music is that you have a street style, but you can do the lyrical music as well. Where did the balance in styles come from?

JR: I’ve thought about this a hundred times. I know I can rhyme… But at the end of the day, I rap for me. A lot of people will give you bullshit excuses that they rap for the fans, the money, all that. When I first started rapping, it was a way for me to vent; to talk about shit I can’t talk about — because like any nigga in the hood, you look weak when you start talking about certain things. The only way I could get certain things off my chest was to rap. [If] you fuck with my raps, you’re saying you fuck with me as a person. That’s how I take it.

Esco: I think it was also a journey because at first, it wasn’t always like that. When he first came back to the studio, he was leaning more toward trap and street music, but you could always see the talent. It wasn’t basic ABC trap music. I think as he started to find this — his flow and sound — it all developed. We always have talks that we strive for greatness, right? You play the game like a pro. Somebody like Kendrick, he’s playing the game to be the best. Not everybody plays the game, and that’s cool. Some people rap like Dom Kennedy. He’s not really rapping to be the best, but he’s dope.

HHH: You have a buzzing video for “Real Niggas” right now. What’s in store for the new year? Or is that just a loose single?

JR: That’s just a loosie. On my next project, I’ll probably do some mixtapes. I won’t do an actual album until I get a little bit further toward where I want to be, with more listeners. When I do my first album, I want to tell a story.. something you’ll be listening to 20 years from now. I want it to be timeless, not hot right then and there. I want something that people can go back to 20 years later and say, “You remember when this came out? I used to listen to this every day.” We’re going to do skits, and I like that album flow, full songs. I’m not a stream seller. I want it to be quality music; it puts you in a space.

Esco: We’re here to play like the pros play it. We aim for longevity.

Be on the lookout for more singles from JR in the coming months. 96 Degrees is streaming on all platforms.