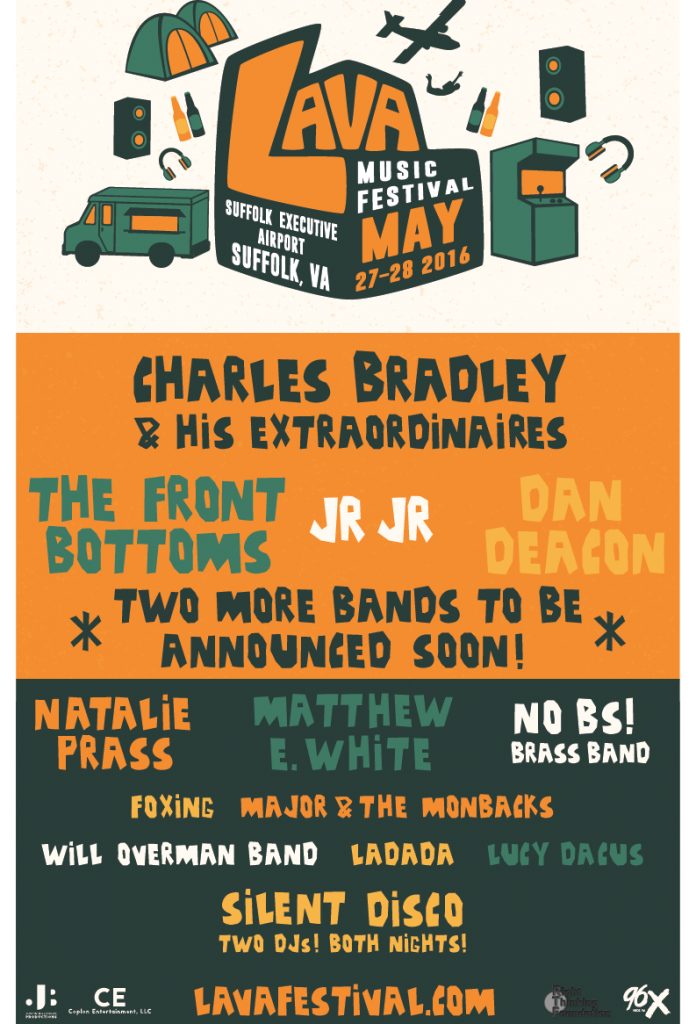 Start planning your Memorial Day weekend now because Suffolk’s LAVA Fest has just announced a super lineup great that’s great news for any music lovers out there holed up in this snowpocalypse.

Tickets are on-sale now for this two day festival taking place May 27th and May 28th that features twelve announced national and local bands worth going out of your way to see and two more still to come. Acclaimed soul singer Charles Bradley & His Extraordinaires tops the bill for this amazing lineup and also appearing on the multiple stages at the Suffolk Executive Airport this May are The Front Bottoms, JR JR, Dan Deacon, Foxing, and plenty of our favorite Virginia bands including Natalie Prass, Matthew E. White, No BS! Brass Band, Lucy Dacus, Major And The Monbacks, Ladada, and the Will Overman Band.

Besides the bands, the festival will have plenty of great beers and local food vendors on hand as well as plenty of activities in case you feel the need to take a break from some exciting live music. Last year’s event had a fully stocked arcade and lounge area, a gigantic rock climbing wall, giant beer pong, human foosball, and more that we’re probably forgetting. New to the event this year are camping options for all guests, late night Silent Disco, and plenty of surprises we’re sure the LAVA team is working hard to finalize.

“We are excited about the addition of the 2nd day and camping. With the support of live music fans in Hampton Roads and the region we hope to make this a Memorial Day tradition and something unique for this region. We hope we can become an alternative or another festival to attend for those that enjoy or want to enjoy a music and camping festival experience,” LAVA Producer Justin Billcheck stated in a press release.

RVA Magazine was on-hand for LAVA’s inaugural event last year and we were extremely blown away by the coordinated ingenuity of the festival planners as well as their ability to create a truly one-of-a-kind atmosphere. It’s harder than ever for a music festival to stand out, but with a great layout, exciting bands, and clever ideas, LAVA made the boldest debut a new festival could possible make.

Here’s a quick look at each act announced for LAVA’s sophomore year:

Florida soul singer who set the world on fire earlier this decade with not only his captivating documentary Soul Of America, but also his stunning soul records like 2013’s Victim Of Love.

Loveable indie rock quartet out of New Jersey as comfortable switching from pop punk to folk rock as they are electrifying people with their live performances. Their recent album Back On Top showed that the band hasn’t even begun to scratch the surface on their musical potential.

The former Dale Earnhardt Jr. Jr. is still riding a huge wave of momentum after their rebranding and impressive eponymous junior record release. As “Gone” continues to creep up the radio airplays, who knows what level JR JR will be out come this May? Check out our interview with them from this past October here.

For those looking for an interactive performance they’ll never forget, then this veteran electronica artist from New York is for you. Long acclaimed for the intricate arrangements on his records, Deacon’s latest record Gliss Riffer went down a more pop-oriented path that may just make his concerts that much more impressive.

Most would kill for a year that Natalie Prass had in 2015 with a debut record that was instantly in a class all but itself. The recent Richmond transplant repped the city hard last year as well as helped solidify Spacebomb as a top player in the musical world moving forward. We’ve chatted with Prass a bunch here at RVA Magazine so check out our first chat with her from a year ago here or read our recent feature on her in our latest print issue here.

The mastermind behind Spacebomb records is a name everyone in Richmond should be familiar with now. No one could have predicted the success of his 2012 debut record Big Inner and his follow-up from last year, Fresh Blood, was a perfect continuation of that timeless sound proving that no one in music has an ear quite like White.

Reggie Pace and his band of intrepid musicians are still making some of the most inspiring and relevant music to come out of Richmond. Last year’s Brass Knuckles was one of the most ambitious projects a brass band has ever tackled and paid off immensely for the Richmond’s biggest cheerleaders as they showed their convictions and character are as strong as the musical fortitude they bring each and every performance.

Powerhouse St. Louis quintet with a fiery post-rock sound that’s best exemplified on their fantastic new record Dealer. Their candid and straightforward approach to their music is haunting at times and will hopefully provide a perfect soundtrack to a setting sun over the Suffolk Executive Airport.

Fitting perfectly on a bill alongside Charles Bradley and No BS!, this Norfolk eight piece group is a returning presence from last year’s inaugural event where they dazzled the crowd with their loveable retro sound and completely infectious energy. Check out our feature on the group from this past June here.

Out of Charlottesville, this five piece folk group brings a down-to-earth charm to the festival with music that might be best suited for the campgrounds in the still of night for anyone wishing to keep the good energy flowing.

Lo-fi Norfolk artist with a self-described “soda pop” sound. There’s a handful of tracks up over at a SoundCloud page, but for the most part, it looks like LAVA’s going to be the first time to catch this artist’s unique music.

We’ve written a ton about Richmond’s hottest new star and as of today, so has Rolling Stone! Won’t go into much more detail about Lucy except that you should all be pre-ordering her debut record No Burden out soon on Egghunt Records and snag a nifty vinyl copy before they’re all gone. Revisit our recent print feature on Lucy by clicking here.

Don’t forget there are two more bands to be announced in the coming weeks, but trust us when we say this lineup is more than enough needed to crack open your wallet.

LAVA Fest takes place May 27th and May 28th at the Suffolk Executive Airport in Suffolk, Virginia. For more information on the festival, where to buy tickets, and more, click here.