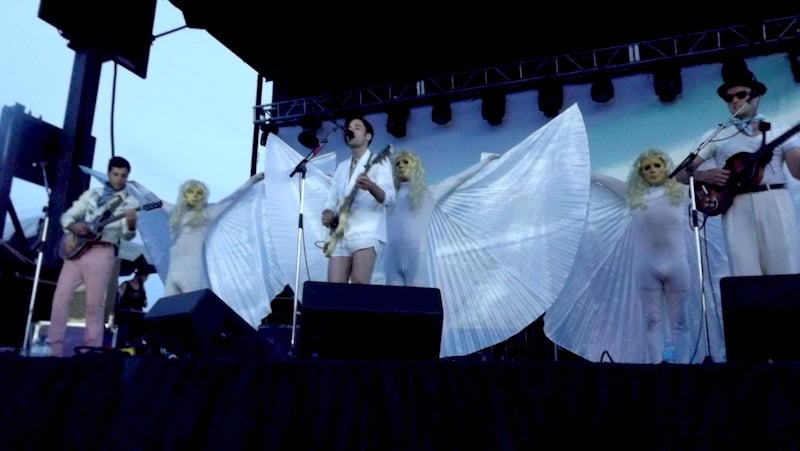 LAVA Music Fest made its debut in Suffolk, VA this past Saturday at the Suffolk Executive Airport with a unique approach to a one-day music festival that would hopefully entice concert-goers across th

LAVA Music Fest made its debut in Suffolk, VA this past Saturday at the Suffolk Executive Airport with a unique approach to a one-day music festival that would hopefully entice concert-goers across the region. With plenty of original ideas and a solid line-up by any means, LAVA clearly surpassed expectations with their first year all while setting itself apart from an already oversaturated festival market with a clear and original identity.

If driving down a runway to get to a festival wasn’t enough, there was a lot more evidence when you first walked in that this wasn’t your typical festival. Two stages separated by about a five minute walk created the playing field and in between them, over twenty local businesses filled the area to offer up anything from free filtered water down to face painting.

Of course, the most visited area was the LAVA Lounge and the activities that surrounded it. LAVA Lounge housed an arcade of over a dozen pinball and video games, all free to play, that quickly filled up with lines as people realized just what was being offered. Later in the day saw the lounge get even more packed as artists like Robert DeLong and Mutemath stopped by for meet and greets with fans filling the area to the brim. Outside the lounge, human foosball, giant beer pong, and a towering rock climbing wall offered other free activities to take part in if you wanted a break from the music. Despite all the great things to do though, the music was the reason everyone was there and it delivered immensely from start to finish. 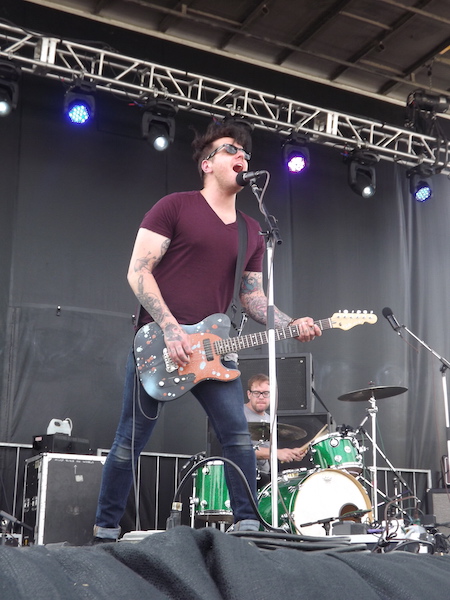 Local bands Wyteshayds (pictured above) and Major & The Monbacks (pictured below), both from Norfolk, opened up the event early in the day with two diverse and solid sets as the crowd still trickled in. From there, Brooklyn indie group A Great Big Pile Of Leaves kept the day rolling at a brisk pace with a fiery set that showed why they’ve been one of the best bands flying under the radar since their 2007 debut. 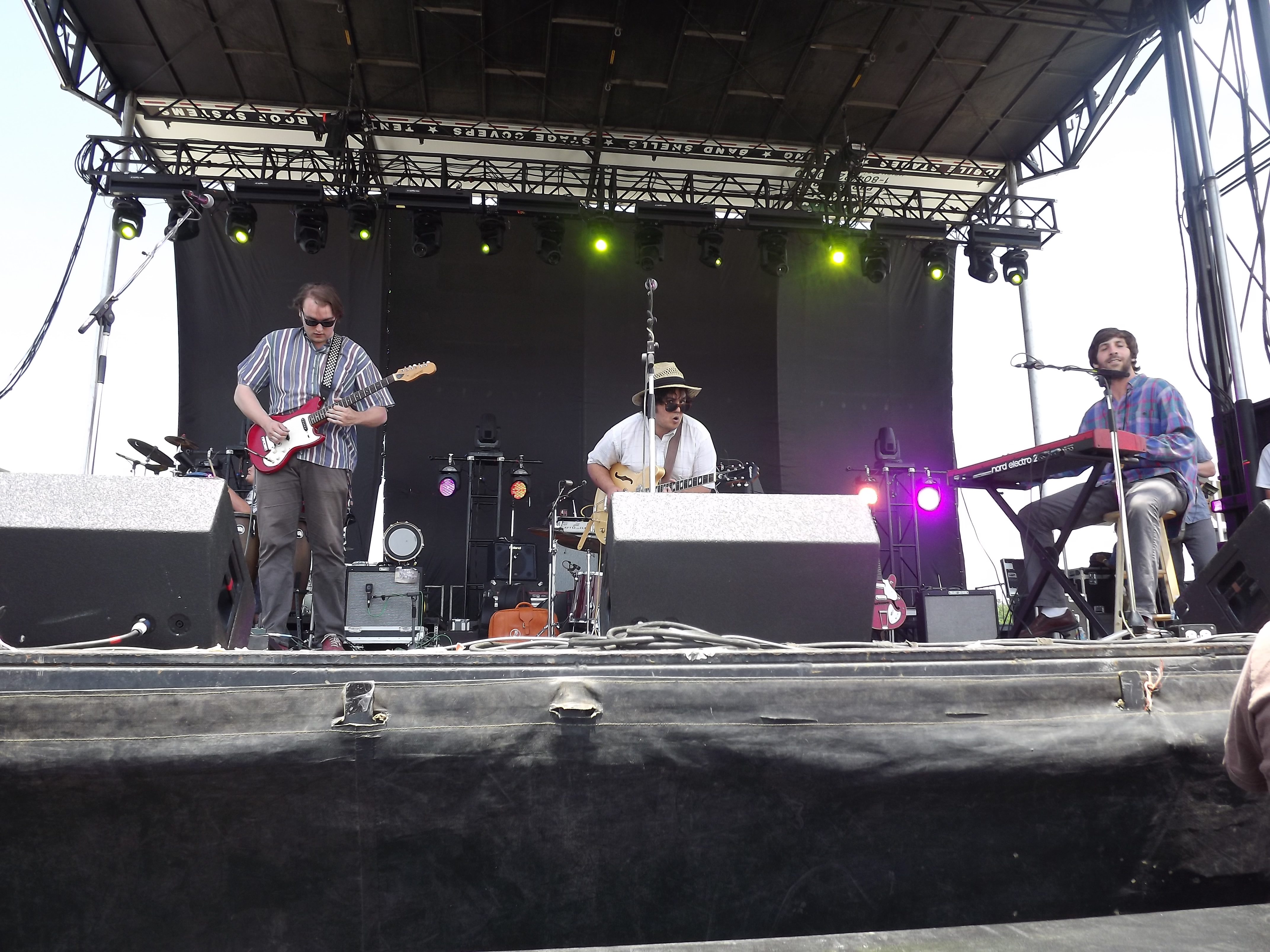 The first truly great set of the day belonged to Robert DeLong who delivered a completely wild and unpredictable showcase of his brand of diverse electronica. Bordered by seemingly every type of electronic instrument possible, DeLong shuffled from station to station to supply the beats and manipulate his voice any way he wanted to. While it might not be a style of music you’re going to listen to on a lazy Sunday afternoon, it would have been hard for anyone not to completely lose themselves in the frantic music and wild energy from DeLong himself in what was easily one of the most memorable points of the day. 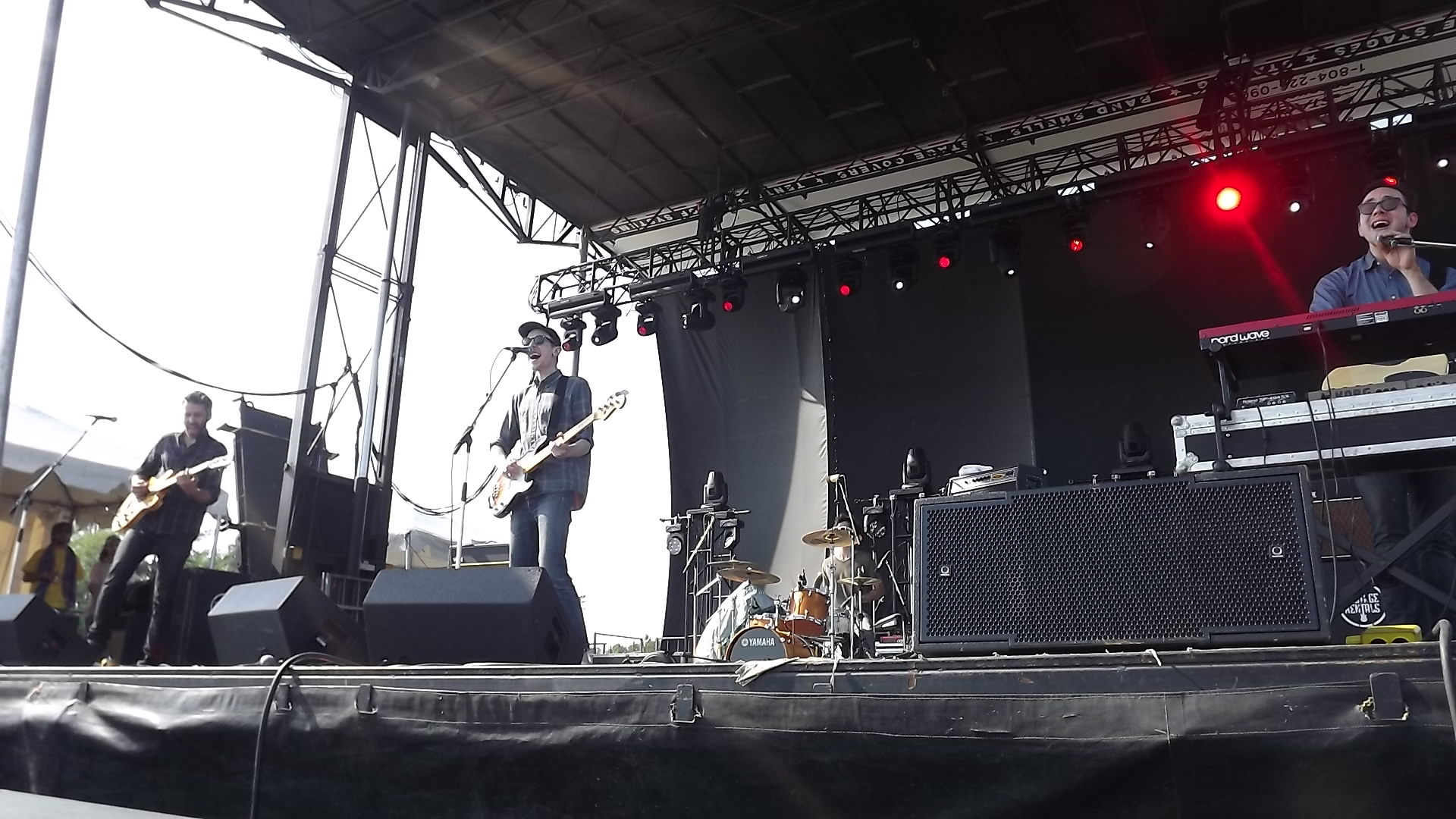 Festival veterans Cloud Nothings and Tokyo Police Club (pictured above) followed next, each showcasing why they’ve been in such high demand for the touring circuit since they came out. For Cloud Nothings, the raw, introspective aggression of each song was on full display through Dylan Baldi, even if everyone’s attention was locked on to drummer Jason Gerycz, a common theme for the band’s live performances. Tokyo Police Club followed with a solid set of songs spanning back to their 2006 debut. What was even better than the band’s set was just seeing how many of the acts came out of their backstage tents to take in their set. Members from Mutemath, A Great Big Pile Of Leaves, and of Montreal could be seen in the periphery of the stage and backstage area, all trying to take in just a second of the amazing Ontario quartet. 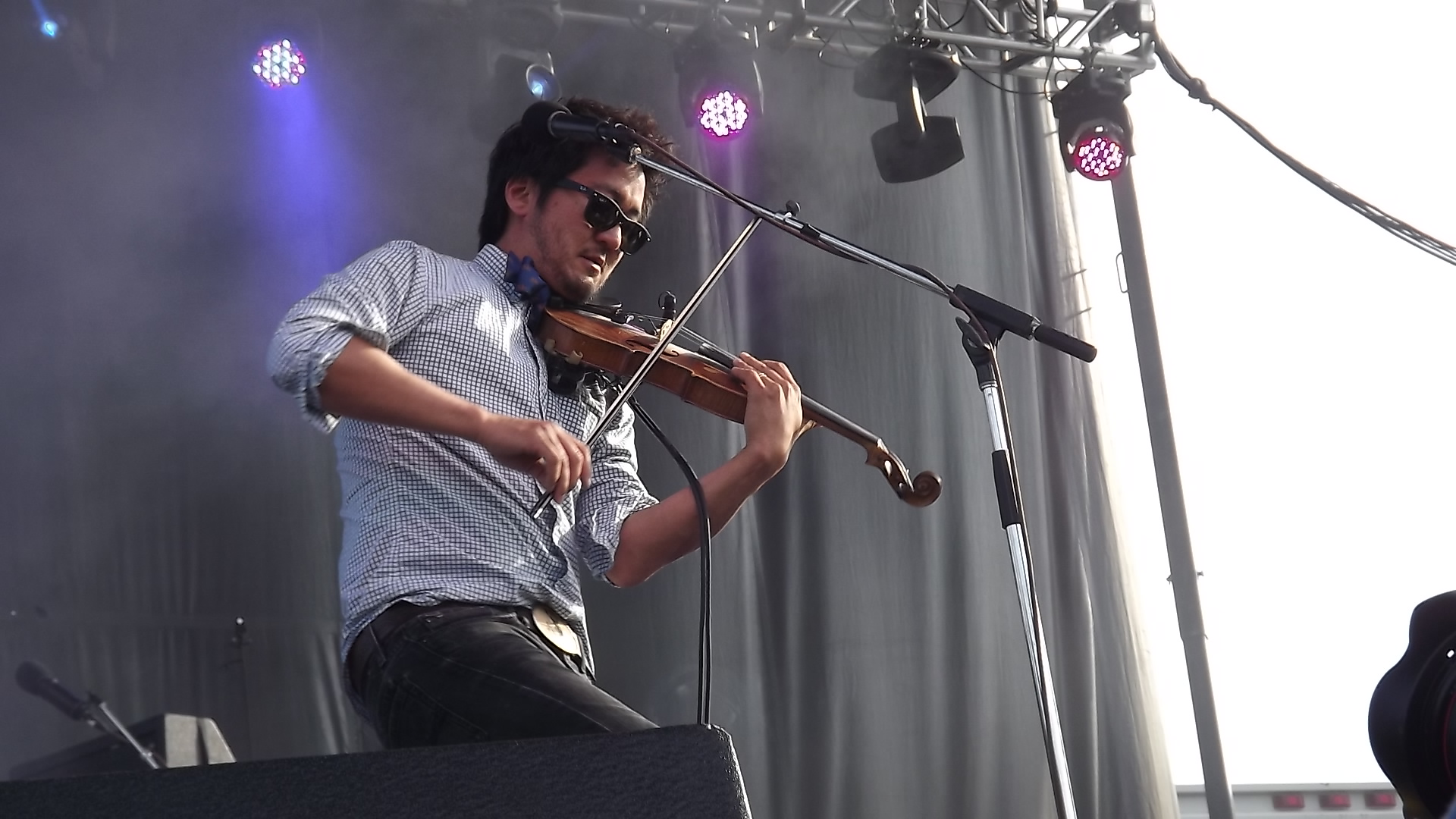 Norfolk native Kishi Bashi (pictured above) followed next with his unique experimental violin music. Flanked by a bassist and a percussive banjo player, the celebrated musician offered up his craftily looped and sequenced songs to the more than willing crowd and sweetened the deal with his trademark energy and excellent stage presence.

As good as Kishi Bashi was though, nothing before or after could compare to the spectacle Mutemath (pictured above) put on next. With plenty of new songs off their forthcoming fourth record being played, the band put their unparalleled intensity on full display with both drummer Darren King and frontman Paul Meany absolutely dazzling the crowd. While Meany brought the crowd alive with crowd surfing during a song and crowd-sourcing certain “instrumental” parts during another, King himself shocked the crowd by breaking drum stick after drum stick with his ridiculous energy. At one point, King continued to drum with the tiny stick nub that remained in his hand, something he may have regretted the next day but the crowd before him would never forget.

of Montreal (top image) were put in the tough position of following Mutemath, but with a wonderfully weird set full of ridiculous props and imagery, the band clearly carved out their own section of memorable moments from LAVA’s first year. Before their set even began, a costumed man feverishly ran down the crowd before frontman Kevin Barnes took the stage with the most swagger and aplomb of the night by a long-shot. Song after song featured more and more crazy theatrics, most from a trio dressed in white unitards and plastic masks that garnered a huge reaction their first time out, and the band clearly lived up to their storied reputation as one of the most unique bands you’ll ever see live. 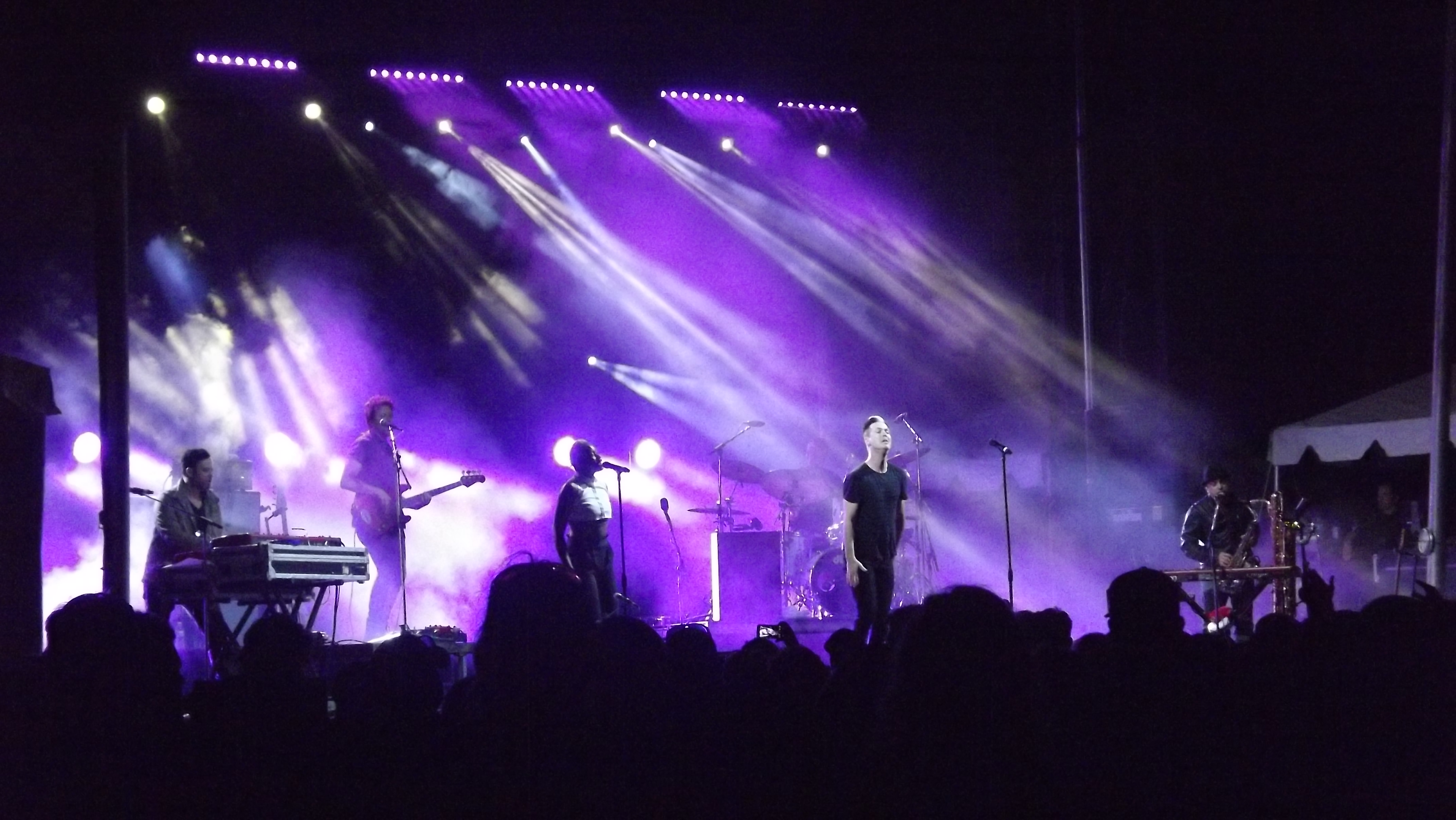 With the sun finally down for the count, Fitz & The Tantrums (pictured above) closed the show with the most engaging set of the night which was perfectly timed for a crowd surely tired from standing on concrete in the sun all day. Singers Michael Fitzpatrick and Noelle Scaggs explored every last inch of the stage while they tried to get everyone in sight up and moving to their music and as always, their amazing rhythm (and saxophone) section provided the perfect soundtrack to the duo’s every last whim. As “The Walker” closed out their show and the first ever LAVA Music Fest, it was clear that the band had left every last thing they had on stage in order to truly live up to their headliner status.

LAVA Music Fest was a true home run last Saturday with their first (and not last) show. It’s almost surprising how well the first year went off without any major issues, a true testament to the hard-working staff that put so much time into the event over the last few months. LAVA Music Fest’s diligent planning of a truly one-of-a-kind music festival paid off handsomely with it being almost difficult to get bored at any point in the day. With music fans saving penny after penny for each year’s festival season, LAVA has clearly established itself as a must-attend event and one that’s got enough room to grow and enough ideas to keep people engaged for years to come. This isn’t the last we’ll hear of LAVA Music Fest by a long shot and music fans across the region should be anxiously awaiting what comes next.