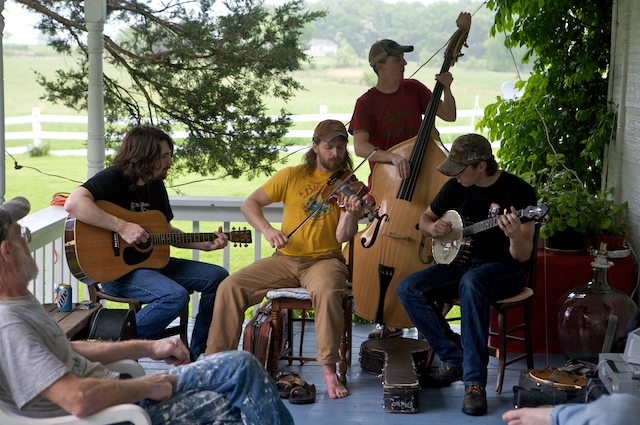 Lord, We Get High: The Fox Hunt at The Camel

This is the sound of God resurrecting in empty bottles, railroads and heartaches, melodies that wind around river rocks and rise from barstools.

This is the sound of God resurrecting in empty bottles, railroads and heartaches, melodies that wind around river rocks and rise from barstools. The Fox Hunt is not from Richmond, but their music captures something of our identity; dusty and drunk and always contemplating the redemption of the conscious sinner. Glorious fiddles ascend low rolling hills of Southern poetry, banjo strings catch sunshine and cigarette lighters and the things that scatter around ashtrays. It is simple and provincial, timeless and nostalgic, and has captured my aural imagination so completely that I haven’t made an effort to listen to much else in the few months since I encountered their CD, “Nowhere Bound.” It is some of the most genuine music I have ever heard, and maintains a lo-fidelity honesty uncommon in the prevalent dichotomy of over-produced pop music and hyperbolically unrefined indie projects. They’re playing The Camel on Black Friday, November 27th, with Jackass Flats and Bar Nun, and if I may be so bold, this show has the potential to be one of the best this year. Recover from your turkey/tofurkey/uncle’s beer stash coma and get your ass there. In the meantime, you can peruse this email interview and some photographs Ian M. Graham shot of them on a porch in West Virginia (The Fox Hunt’s native stomping grounds), and hopefully, just maybe, get as excited about this show as we are.

Old-time, bluegrass, country, folk, rock…if you had to label your music,
what would you call it?

This has always been a tough one for us. I scrolled down and saw your anti-nu-grass moniker and that sounds kind of close, but it seems like just evaluating yourself against something or other gives value to the thing you are against and at the same time takes away from the unique or special qualities of what you’re doing. I think we all come into this thing with really different ideas of what we’re trying to do or say. We all have influences that vary pretty drastically while remaining for the most part classifiable under the generic rock, pop or country genres. I think we have elements of all those, country, folk, punk, etc. because we all have been influenced by those different genres and it shows in what we bring to each song. Finding a way to boil that down has been hard for us as it has been for lots of modern bands. When we tell someone new what we’re doing we usually just say bluegrass due to the instrumentation, but if you have some experience in examining acoustic music, we’re not even close to traditional bluegrass. It just makes it easy for us to give someone completely new to what we’re doing a blanket idea of what to expect, but it isn’t a very good representation of our sound. We need a new word. Maybe Romantic Grass or Monroe-esque or Appalachian-renaissance? Something like an art movement word or something. I’m sure someone will tag one on over the years so we can all know what we did looking back. 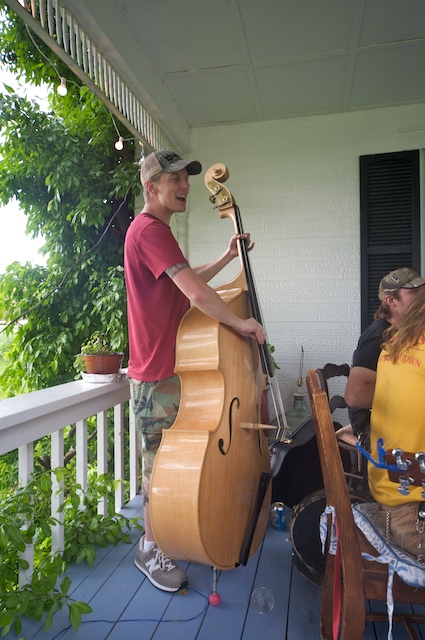 How and when did you form? What was the moment that you knew there was a chemistry strong enough to bind you together as a band?

We started playing at parties at my house 3 or 4 years ago. We’d end up being the last few guys standing at the end of the night just playing covers of our favorite tunes, which were usually songs we all loved or learned to love from each other. Three of the four of us (the two Matts and myself) were playing in a metal band called the Red Oranges at the time and just kind of played acoustic music as a hobby together, now we’re on the other end of that one. We played
instrumental music because we could never really think of anything we wanted to say lyrically. That’s where John and Matt really came in. They had some great songs and we started trying them at our parties. We like to sing harmonies together and Metz and I have always liked playing melody instruments together. When the other two came along with lyrics we really respected and enjoyed layering fiddle, banjo, mandolin, etc. overtop it just came together. We’re all friends first and have learned what we know about playing music together. Our sound has grown up with our relationship as friends so when we’re on stage we are just doing what we love, drinking beer, hanging out with friends and playing tunes. The only thing different than the old Doodio parties is that now they’re our own original tunes and we have lots more friends in lots more towns to share them with. 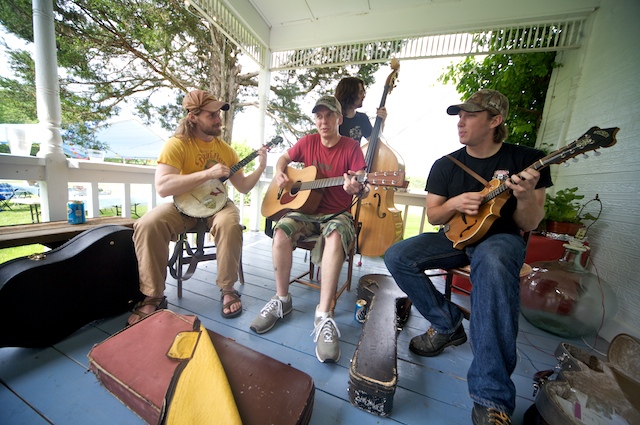 Your music seems to wallow in the godlessness of barroom life while possessing a nearly hymnal (and I’m not just referring to “Lord We Get High” here) quality that I can best describe as glorious. Are you trying to find God in your music?

I think for people in the modern world who have rejected a lot of contemporary or institutionalized concepts of religion or spirituality, that God can be found in just about anything you are passionate about. Meister Eckhart said you have to divorce yourself from the concept of god to find God or something like that. Craig Finn says “I see Jesus in the kiss of young and awkward lovers,” same thing. I think in America today, the average 20-something has developed a good bit of his or her spirituality from watching TV or listening to music more so than from listening to a preacher, pastor, deacon, and so on. There is a feeling in the world, a spirit. Painters paint about it, authors write about it, we know music. The song, it’s our medium through which to pass the spirit.

Where do you feel most comfortable playing? 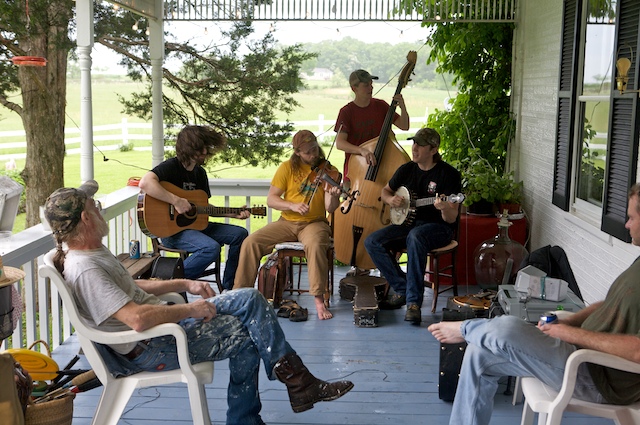 With the increasing popularity of stripped-down mountain music (I’m tempted to call it anti-nu-grass) focusing on bands like Trampled By Turtles, Old Crow Medicine Show, etc, do you see yourselves as part of a musical movement?

I think as a band we have often been compared to bands like Old Crow but I don’t think any of us really know much about new acoustic music. It’s great to get to the festivals and play with and for our friends that know where we’re coming from. We’ve established some great friendships with bands like the Hillbilly Gypsies, the Hackensaw Boys, Pokey Lefarge, the Hot Seats, and the Mayhem Stringband that we see off and on at festivals and hopefully these relationships will continue and grow. For the most part we don’t know much about that world though, other than through the people we play with at the festivals. When we’re in the van or at home we don’t really listen to much of that stuff, maybe because we play in a similar vein every night. We’ve found a gang in Brooklyn that have really become family and they seem to really understand where we’re coming from. We’ve been doing a lot of playing with a band called the Weight up there and that’s been great. We just finished a CD with them and another labelmate (Colonel Records) Goddamn Rattlesnake. They all came down to my studio in Martinsburg for a week and we tracked a record that’s somewhere between the Camp Creek Boys, Woody Guthrie and the Rolling Stones. There’s a lot going on in the old-time world right now and I think we’re really a part of that, but it’s not something that our albums or tours necessarily reflect. There’s a lot going on in Kentucky and West Virginia right now that wasn’t happening three, four, five or six years ago and
it’s great to be a part of that, but I don’t think it’s really hit the mainstream yet. Bands like the Clack Mountain Stringband and Light and Hitch might be a little closer to what we’re into than Old Crow or Trampled by Turtles (none of us have heard). I guess we just take that gang and add our influences from bands like Lucero and the Weight and come out sounding how we do.

What’s your favorite kind of whiskey?

Kline hates the word whiskey. We are a Jagermeister band but when we have to get whiskey bent and hell bound we like to do it on Tequila.

Interview by S. Preston Duncan, images by Ian M. Graham. Special thanks to Jenny Beth Friar and her lovely family (especially Grandma) for hosting me (Ian) on their farm for one wonderful weekend, where I was fed and entertained, and painted Grandma’s fence. Grandma’s cooking is the stuff of legend.