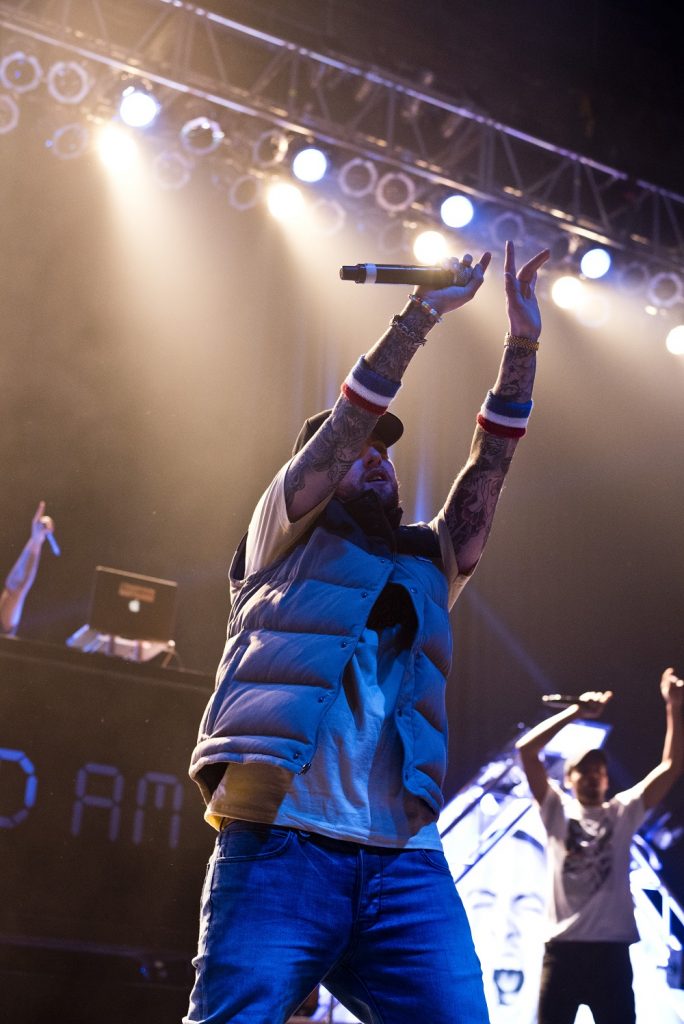 Mac Miller’s path to success is a hard one to replicate.]

Mac Miller’s path to success is a hard one to replicate.]

When we first chatted with him almost five years ago, he was a young, 19-year-old fresh on the scene, with his tape K.I.D.S providing a vibe reminiscent to the Golden Era rap…only with a youthful twist. Since then he’s had #1 albums with no major label backing, gone through and successfully recovered from the addictions of fame, and even has production/collaborative efforts with artists from Juicy J to Flying Lotus (and even has made a name producing tracks himself under the pseudonym “Larry Fisherman”).

What’s most impressive about Miller is his ability to continually bring in new fans while retaining his old. His authentic, heartfelt music is able to blend mainstream sounds with an underground aesthetic unmatched by few. Miller can be a gateway drug to hip-hop…and a damn good one at that. 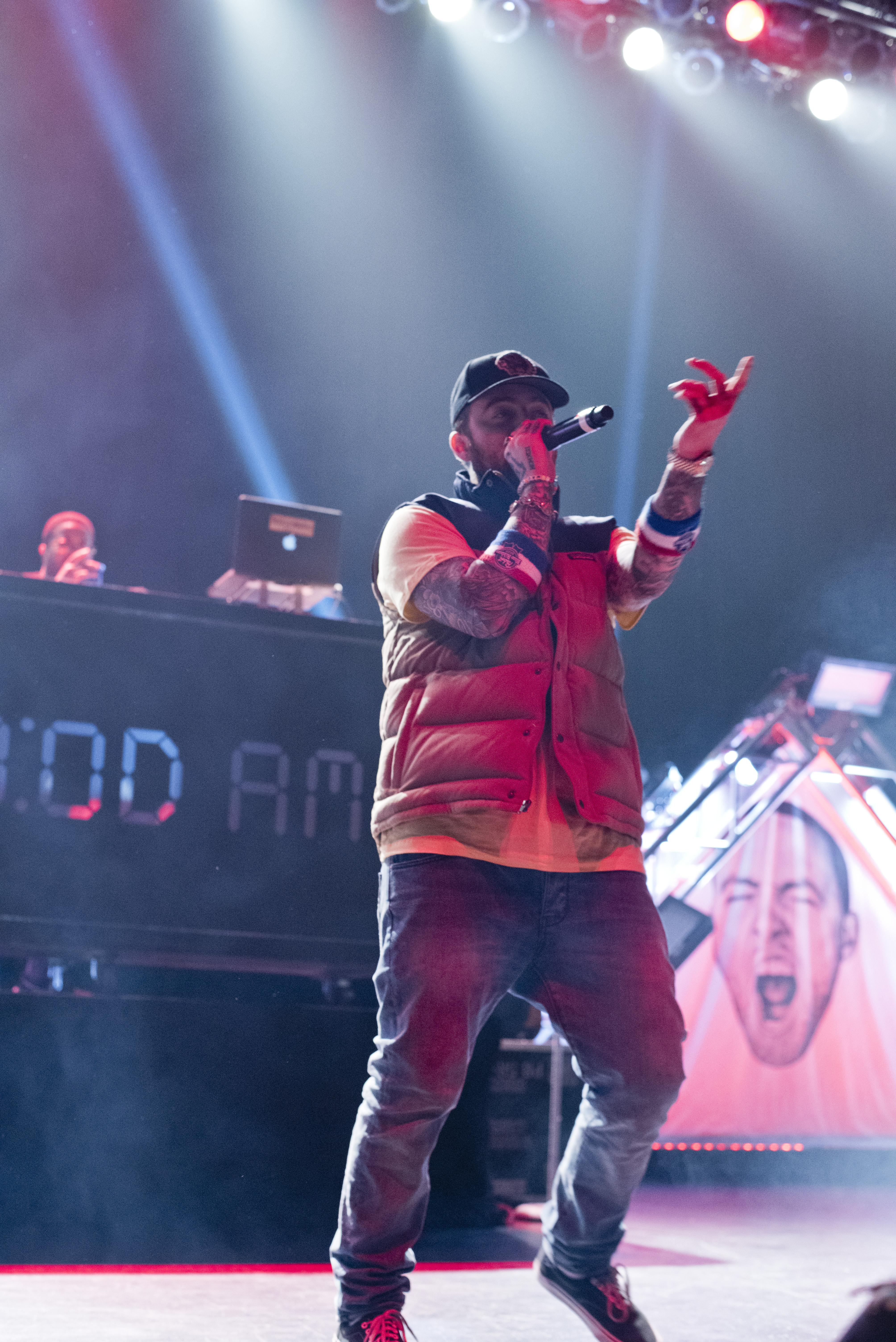 Last Thursday Dec. 10, Miller stopped into The National to promote his new album GO:OD AM, so we decided to stop by.

We unfortunately missed Choo Jackson’s set (however, you can check out his SoundCloud here), but walking in, I heard the familiar tune of Cyrax!’s “Tool” from the stage.

“Oh shit! Divine Council is playing?!?”, I thought, rushing down to the performance hall.

In touring along with Mac Miller, Michael Christmas reached out on this stop to give Richmond’s own Divine Council some time from his set. This was an awesome moment to see for the DC boys (as well as for Richmond hip-hop in general) as the sold out crowd bounced furiously to their internet-famous hit “PS42WW$” by $ilk Money. Honestly, when it comes to having local groups playing at The National, the reception can be hit or miss, but Thursday, Divine Council was definitely a hit.

After The Council left the stage, Michael Christmas finished up his set. With a carefree, playful attitude, his music sat well with the energy DC had left behind, keeping the crowd engaged back and forth. As one of the only artists on the bill I wasn’t familiar with, I can now officially say I’m a fan. His persona is great, and his videos blend a mix of hilarity and relaxation (check out “Michael Cera” and “Look Up/Save The Day”).

Following Christmas was EarthGang, a duo comprised of Johnny Venus and Doctur Dot. Upon first impressions, the group definitely stands out from the rest of the ATL resurgence going on right now. Rather than aiming towards the same trap bounce of The South, their soundscape brings out a spacey aura combined with melodic samples that’s more reminiscent of spending a Sunday with a vinyl collection.

However, that’s not to say their show slowed things down. No, in fact songs like “I Don’t Give A Fuck”, brought them to owning a common sentiment the crowd was all too familiar with (and widely receptive to), as well as “AWOL”, a chilled out J.U.S.T.I.C.E League jam that ended their set smoothly.

At this point, the audience seemed well warmed up, and the chants of “We want Mac!” began spilling out. The young crowd was hyped for the man they paid to see, and I was curious to see how he’d blend his mix of old and new given his wide-ranging catalog. 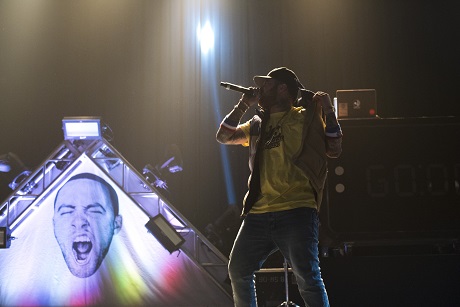 Finally, the lights cut out, and cheers of excitement roared throughout the building. Jumping out like the frontrunner to a Greyhound race, Miller opened with his Blue Slide Park hit “Loud”. The energy was ecstatic and the crowd knew every word. Although he’s been noted to play with a band before, tonight it was a one man show.

The Pittsburgh native made it clear he knows how to own a stage, moving furiously from one side to the other. It’s a testament to a good performer (especially in rap) to be one with your audience rather than just letting them bask in your physical presence, and something Miller can do incredibly well. From there, the show mostly blended his trap influenced and bounce tracks. Even newer songs like “100 Grandkids”, (his hit) “Weekend”, and “Clubhouse” were as well-received as his older selections like “Nikes on My Feet” and “Donald Trump”.

It’s not often in Hip-Hop to see an artist transition from generation after generation to new fans so fluidly, but that’s exactly what Miller has done. At this point, with half a decade under his belt, it doesn’t seem like the “Most Dope President” is slowing down or compromising himself at all. No, Miller’s going to be churning out his unique, yet indelible blend of bangers and melodic hits for years to come.