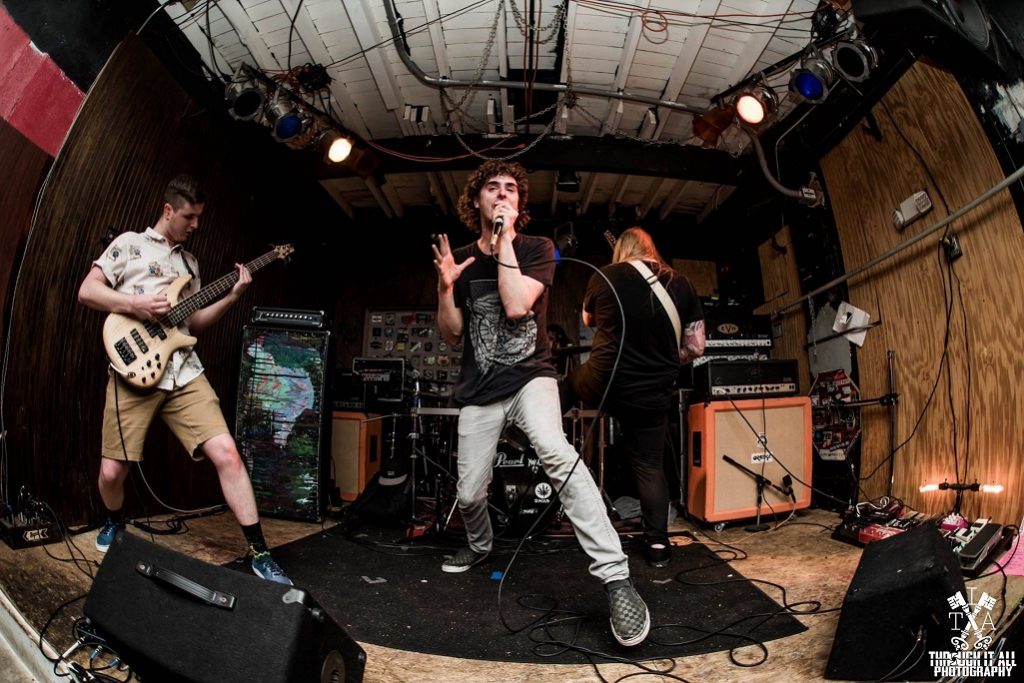 While the return of “screamo” to the underground zeitgeist has been documented with ever-increasing thoroughness, the recent uptick in a related spastic genre birthed from the 90’s hardcore scene has flown relatively under the radar. We speak of the genre known as “mathcore.”

Like screamo, “mathcore” is also a portmanteau, derived from combining math rock and hardcore. This combination of odd rhythms and metallic punk grit was pioneered two decades ago by bands like Converge, Botch, and The Dillinger Escape Plan. And its recent resurgence can be found partially taking root here in Virginia through Black Matter Device.

“I’d describe [our music] as the physical manifestation of my mania presenting something… sonically absurd and aggressive,” said Black Matter Device frontman Michael Toney. Toney lives in Fredericksburg, where he started the band in 2014 – recruiting Colton Armer to play bass, Roman Rodriguez for drums, and Joey Woodard on guitar. However, these days the band is geographically split, with half of the members living in Richmond.

The band finds ways to work around their geographic barriers, but Toney finds there’s nothing that can stand in for playing music in a room together. “A lot of the time I’ll write whole demos on my own and bring them to the band,” he said. “But most of my favorite tracks usually pop up in the practice room while we’re jamming.”

The band operates out of Toney’s combination basement and home studio, doing everything from practicing to recording there. And while Toney does not play an instrument in the band, his musical contributions to the band can’t be understated. He masterminded much of BMD’s first record, Modern Frenetics, on his own; he also handles every element of production for the band. Despite this, though, he remains humble: “I don’t really think of myself as much of a writer.”

Black Matter Device’s second album Hostile Architecture came out earlier this year, earning praise from a variety of media, from mathcore-specific blogs to Alt Press. Citing influences ranging from the bizarre chaotic hardcore of Daughters’ Hell Songs to the abstract post-punk of Guerilla Toss’ Kicked Back Into The Crypt and the rythmic djent of Meshuggah, Toney said that the new record wasn’t really united by much of anything thematically beyond “panic chord riffs.”

Riffs aside, Toney embraces the label of mathcore for his band: ”I heard Psyopus when I was 14 and was hooked ever since.” He spoke highly of the mathcore and screamo communities (which while adjacent, remain distinct) – particularly of fellow mathcore acolytes The Callous Daoboys, “If it weren’t for [Callous Daoboys’ frontman Carson Pace], I don’t think we would have made it this far in the past few years.”

As for what’s next, having built a name for themselves in and around Virginia over the past few years, Black Matter Device are venturing out on an East Coast tour in July – as well as working on a batch of new releases. As Toney put it, “I’ve never been happier musically.”