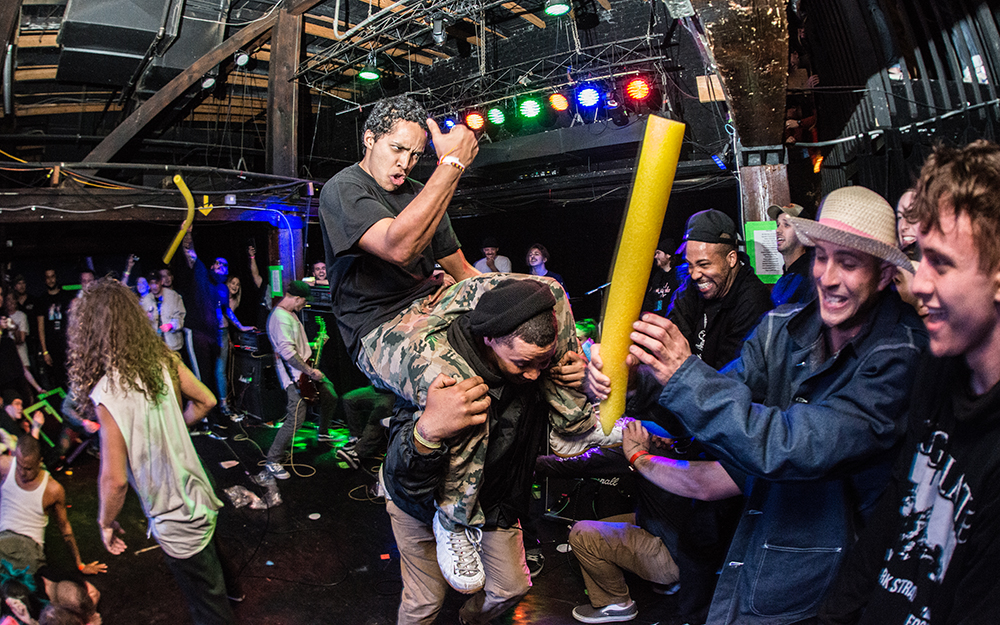 As a hardcore kid that grew up going to shows in the mid-‘80s, having a fest like United Blood in my hometown makes this city very special to me and by the looks of it, it appears a good amount of people, both young and old, feel the same way. Now in its eleventh year, United Blood has become one of the most anticipated events of the year for hardcore fans not just in the area, but across the country, and for good reason. Promoters David Foster and Ryan Wall (of local band Bracewar) worked tirelessly to put together a powerful show full of diverse hardcore bands that proudly added to United Blood’s growing legend within the hardcore community. 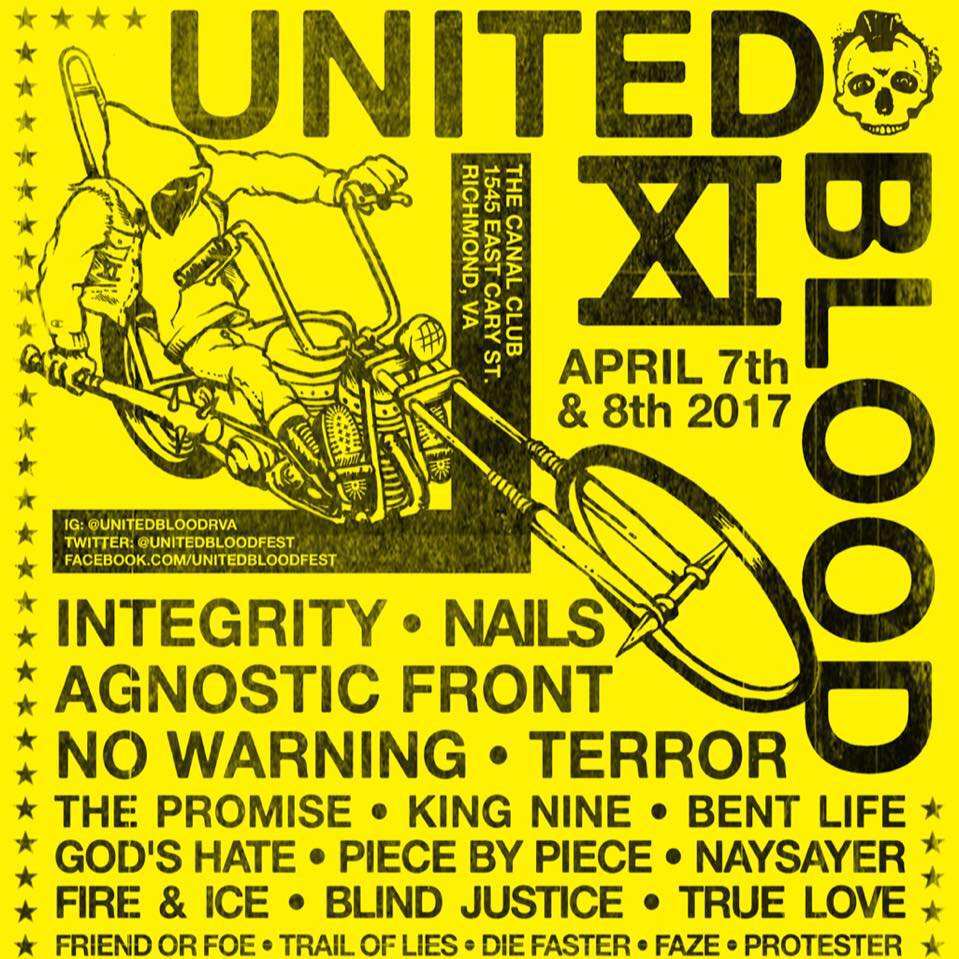 This year’s festivities kicked-off on Thursday night, April 6th, with a pre-fest show featuring bands Redvision, Mindforce, Unified Right, Queensway, and Richmond natives Break Away. This “soft” opening for United Blood was intense across the board with every band doing their best to set the crowd off, and it all set the tone perfectly for the rest of the weekend. Packed full of singalongs, stage dives, and moshing moments, Break Away headlined the night with the high-energy hardcore that they are well-known for. 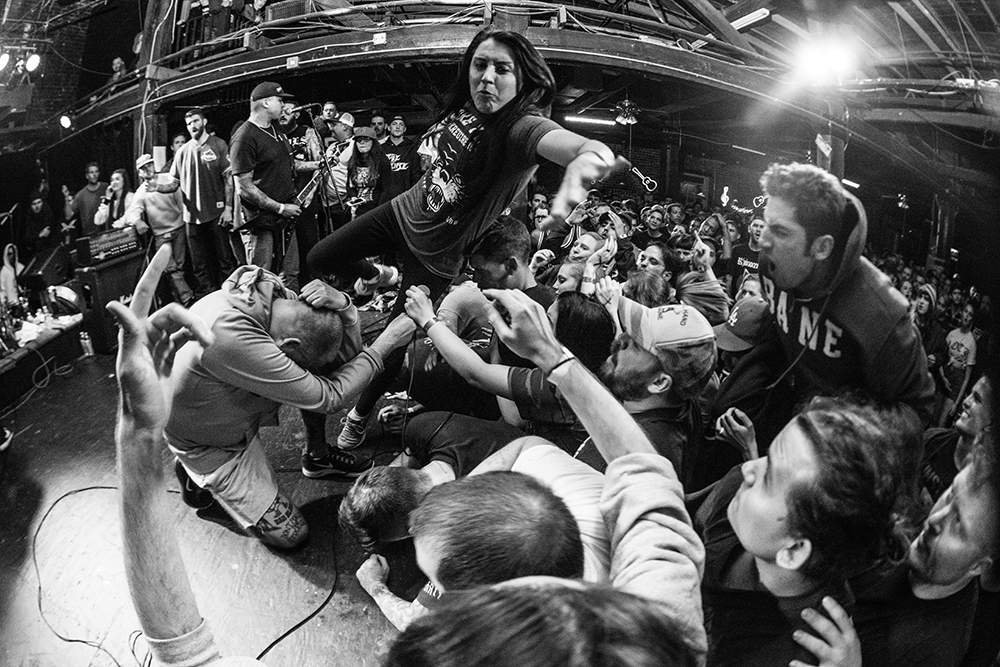 During the show, I took a step back and looked at just what type of people this event brings out. There were a lot of younger faces in the crowd from local areas as well as from out of town, all integrating into a chaotic pit scene that also spoke to the spirit of the event. Time and time again, I witnessed kids — male, female, Asian, black, white, Hispanic – diving around, kicking and punching their hearts out to show the support for the bands that play the music that they love. From a distance, you could see people go down after getting knocked hard, even the women. It must be a strange feeling to be so into the moment, flailing your arms or legs in the pit, and then suddenly realizing you just bashed some young lady in the head. But here at United Blood, that is not a typical young lady. Not only is she not phased about what just happened, but she just did the same thing to someone twice her size five seconds earlier. And there was no reckless abandon here either. Strangers helped up strangers, as well as their closest friends, just to make sure no one was really hurt. It’s didn’t matter where you came from, who you knew or didn’t know — it was all about having fun here.

The next day saw the United Blood festival officially begin as even more people crammed into the Canal Club for a jam-packed day that would feature fourteen bands starting promptly at 1 PM. The majority of people were staunch supporters of the scene, with many clamoring around the downstairs of the venue looking to get their fix on the latest hardcore releases, gear, and merch from bands and labels, like New York’s Reaper Records. Unfortunately for most people (and sadly myself), the most popular item, a Trail Of Lies t-shirt, sold out within minutes of doors opening, but there was still plenty of great swag left such as an exclusive festival t-shirt by Integrity.

The diversity of the festival really took center stage on Friday, something that was just heartwarming to see in person. The fans and many of the bands that played such as Krust, Bracewar, Faze, Terror, and Dead & Dreaming were prime examples of how welcoming the scene has become today, representing the community growth of the subcultures that my favorite older bands sang about in the early ‘80s. It went further than just the bands playing though. Hip-hop of all things played between bands each time the stage was reset, and it’s definitely something special to see people dancing around to trap music right after stage diving to live punk bands.

I observed what seemed to be even more women in the crowd and within the pit during the shows. Even more so, I noticed more women of color attending the fest, something that was extremely rare to see in the late ‘80s. As far as Virginia shows around that time, I could confidently say that the amount of women of color at these shows could be counted on one hand, if any at some shows. 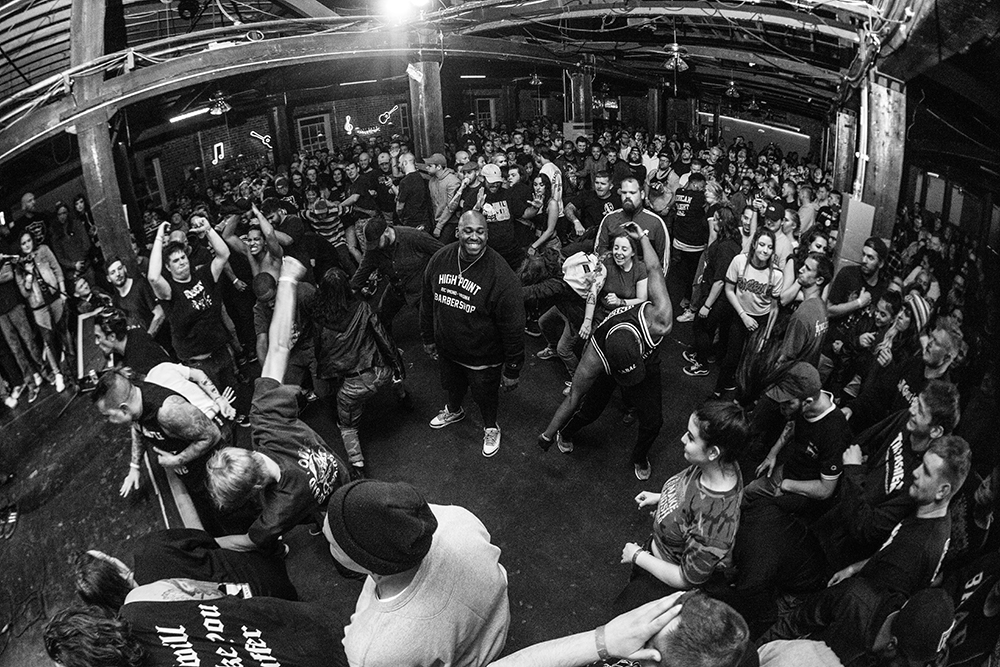 Growing up, there were times when random Nazi skinheads might show up to cause some trouble at a local show, to quickly be turned away whether it be by a quick adolescent fist or well-placed brick. Richmond’s scene is far from perfect, but has never tolerated racial ignorance within the scene and continues to grow in so many ways as the years pass. In my experience, other than my group of friends, people back then were less eclectic in what music they would listen to. There were fans of only rock, or only rap and so on, so there was very little crossover even when it came to social groups. In fact, some would go so far as to treat people as weird or freaks just because of the music you listened to or how you dressed. This is how punk scenes became the tight families that there are today, but obviously the times have changed.

Friday unfolded better than anyone could have imagined. Richmond’s Division Of Mind made their United Blood debut with a blistering set, while RVA veterans Friend Or Foe, Lost Souls, and Naysayer all had incredible sets. The harder-than-hard God’s Hate had me moshing on stage with camera in hand, while New York’s King Nine keep the pit brutal with every song. Terror returned to United Blood with another iconic show featuring a couple songs with guest vocals from former bassist and front man for Richmond’s own Down To Nothing, David Wood as well as Rashod Jackson, drummer for Bracewar.

Closing out the fest on Friday night at the Canal Club was Cleveland’s infamous and legendary band Integrity, a band I had not seen since the early ‘90s who did not leave me or the crowd hanging one bit. The band was on point and the crowd let them know it. When frontman Dwid Hellion screamed the first word of one of Integrity’s most memorable songs “Micha: Those Who Fear Tomorrow,” the crowd exploded into utter chaos. The energy lasted right up until the band played their last note.

Yet, the night was not over.

Everyone quickly left the Canal Club to catch the “Midnight Mosh” after-show where new band Candy, featuring members of the former band Malfunction, Richmond veterans Bracewar, and Atlanta’s Criminal Instinct, kept an already exhausted crowd screaming for more. I think I heard 300 plus people showed up for the after show. Three. Hundred. People. After a full day or hardcore. At Midnight! And people still showed up early for the start of the final day! 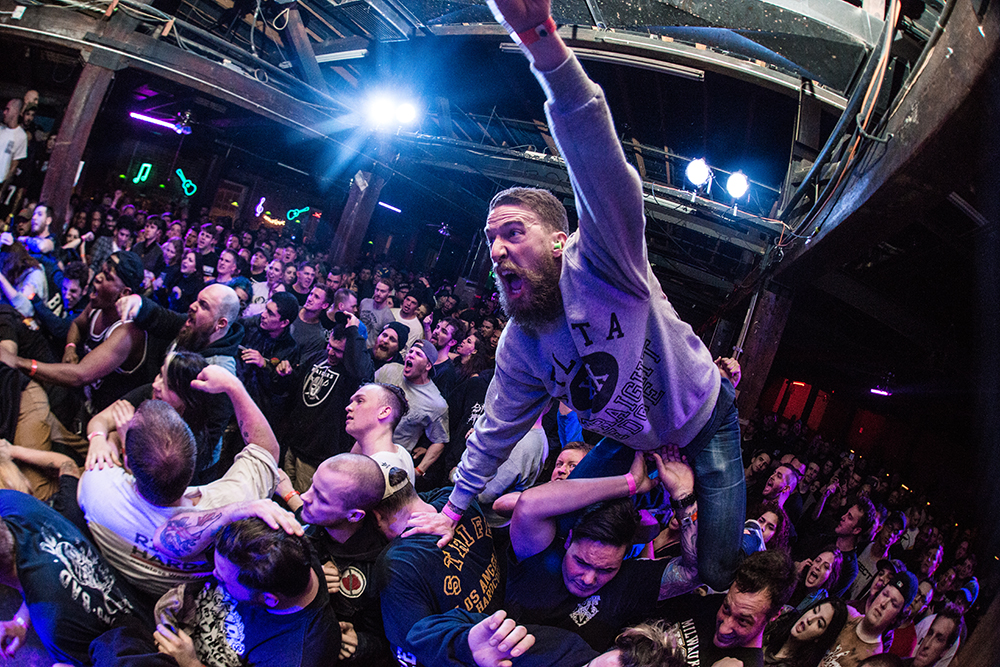 Saturday’s event began at noon with another smattering of amazing and brutal performances. Among all the other great bands, some crowd pleasers were Midnight Sons, Dead & Dreaming, and Protester from Washington D.C. Hailing for the Jersey shore, Blind Justice had a set that just has to be seen on video. Blow up dolls, people getting thrown through tables, flying paint cans, and pool noodle moshing is just a small touch of what went on. The whole day saw an eclectic mix of talent performing. Richmond favorites Fire & Ice, California’s Nails, New York hardcore legends Agnostic Front, and Canada’s No Warning all capped off an amazing weekend with some of the most powerful sets of the year, leaving United Blood XI as yet another unforgettable weekend of hardcore celebration.

But above all the bands, my mind comes back to how much the scene has grown since I first learned of it all those years ago. Throughout the weekend, the stage and dance floor was a chaotic battleground of women and men of all backgrounds taking out all of their aggression through the music they love. I saw groups of friends hanging out that weren’t stereotypical displays of what punk rock would be, proving punk and hardcore’s immeasurable reach within today’s society. People were stage diving, moshing, and walking on heads with the biggest smiles on their faces, filled with energy from the music as well as the sense of community around them.

Richmond’s United Blood fest was what hardcore is about in 2017. People of all types coming together just for their love of hardcore. No one left out. Everyone united.

Word and photos by Ken Penn

Deep in the woods down a long, long gravel driveway off a long winding road in Varina, sits “The Shed”, the studio and hangout spot for... READ MORE

Deep in the woods down a long, long gravel driveway off a long winding road in Varina, sits “The Shed”, the studio and hangout spot for... READ MORE