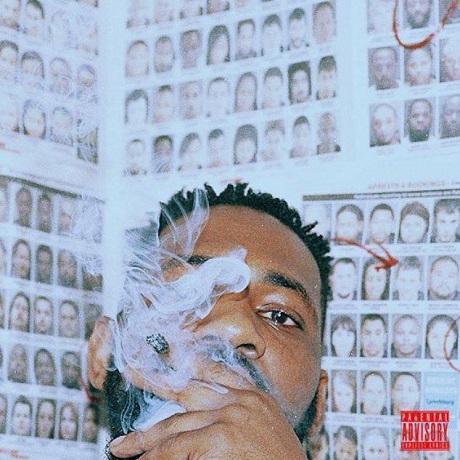 Nickelus F discusses his new album Triflin’, looks back on his journey through the industry, and reveals a second Flag On the Moon show

Nickelus F’s newest release, the long-awaited Triflin’, dropped about a month ago and I don’t think we need to tell you that anything that comes from this RVA wordsmith is awesome, but it is, and if you’re still skeptical then just take a listen below.

Since releasing the 15-track project, a lot has been going on with the hip hop artist and producer. The album hit number 58 on the hip-hop charts. Nils Westergaard put up a mural of his image in Oregon Hill. He co-released the mixtape Trick Dice with fellow Richmond resident and producer Shawn Kemp, aka Lil Ugly Mane.

But even with a hectic schedule and hot new album, the Richmond spitter, aka “Sweet Petey” had time to sit and chat with RVA Magazine to talk about it all.

Although it was just as wanted it, the Triflin’ project was originally scheduled to be released earlier. About two-thirds of the way through the production, he lost a hard drive with all the material he had put all his effort into, to spilled Pho.

“It sucks because I’m such a perfectionist with getting the right take,” he said. “I could spend two hours spitting eight to twelve lines…and I might say it right every time, but I want my voice to feel a certain way, sound a certain way. It just takes time.”

Nick F comes off above all else, humble. Not in a self-conscious way. Not in a self-deprecating way. He just seems to know himself, and understand his own abilities, and what he was put here for.

“I feel like I’m a special individual…I offer a lot in terms of art and culture,” he said. “But through the eyes of certain people, I could easily be a criminal, be a drug dealer, based on my outward appearance…”

This is one of the predominant themes in Triflin’, as demonstrated early on in the album’s intro, “Laced Weed.” The song begins with a recorded conversation between Nick and a police officer who has pulled him over in his neighborhood. The police officer tells him, “The area you live in is not such a good area down there. So, when people have violations, we stop them to make sure everything’s good.”

Nick says he can’t even go get a beer down the road without being hassled.

Even the album’s cover makes a bold statement. In it, Nick blows smoke while standing in front of a wall papered with “gotcha magazines, which are predominately black and brown faces.”

“That cover was basically to depict every black man in America…but when you listen to it, I got a lot more to say,” F said. “To put me in front of that is kind of like stepping out of the preconceived notions and showing that [I] offer more. I also wanted it to be open for interpretation as well…”

The title Triflin’ refers to what his grandmother used to say when he was bad. And it applies. The album tells very personal stories about a man who has made mistakes and has regrets.

“My whole journey through music has been personal documentation throughout,” F said. “When I pass on, if you go back and you listen to my music from my first tape to whenever I stopped, you will hear my life, my stories, when my voice changed, when I started trying to sing more, when I started making my own beats, when I broke up with my girl, when we got back together, when I had kids, when my grandmother passed. All those things are in my music. If you picked certain songs out you could write a whole biography.”

Nick said if he had to pick a song that summed it all up he’d go with “Obnoxious,” a track off of Triflin’.

“I feel like on that song I utilize a lot of my weapons…melodic first verse…rapping on the second verse…the second verse is crazy…it shows the type of things that I want,” he said.

Part of Nick would bring out the old freestyle champion from 106 and Park fame for the rappers who know the craft.

“My natural instinct is to just go,” he said. “Punch line, punch line, metaphor, simile, wordplay…utilize all the wordsmith in me…but then another part wants to be the artist and resonate with people and maybe put things simpler,” he said as he hit his fist against his hand.

In this album, Nick says he learned how to suppress the urge to over rap and just refocus his energy to make the best songs possible. To convey a mood or a message.

A lot has changed in recent years for Nick. He’s become a father. He’s gone back to college. He’s worked again with Drake for the first time in years. And while he’s gone through a lot emotionally, from envying his friend and collaborator Drake’s success, to questioning whether it was even worth it at times to keep rapping, he feels he’s come out on top.

“People know we did music together, and when he blew up, people were always like, what’s up with that? When are you getting on?” he said. “You hear that every single day for a matter of years, you go through a wide range of emotions…I was smart though. I knew that it was all part of my test. Waiting.”

But despite the hardships, Nick said he’s glad he went through the fire.

“I’ve become the artist that I felt I could be back then,” he said.

Besides the mural and releasing Triflin’, he also raps on and is credited with the recently released Trick Dice, a collaboration with the “retired” Richmond-based producer and rapper Shawn Kemp/Lil Ugly Mane. And it’s incredible.

Down the road, on December 11, Nick will be collaborating with Michael Millions again for Flag On the Moon 2. For those, that had the pleasure of attending the first show at The Broadberry last year, you know this is an event not to be missed. Flag On the Moon 2 will be held at The Top, in Shockoe Bottom.