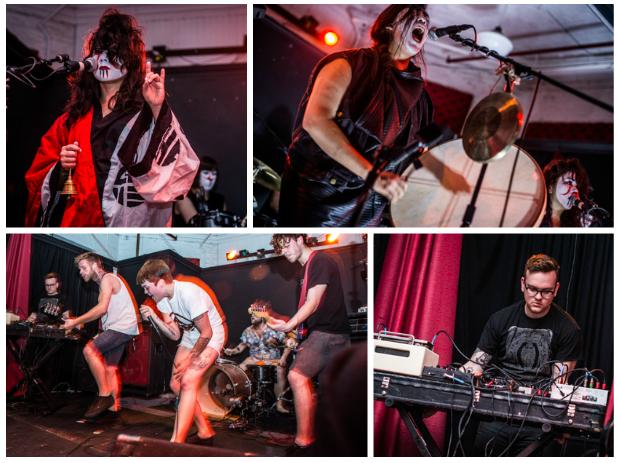 Last Sunday, Gallery 5 presented a matinee show featuring buzzworthy bands Perfect Pussy and Yamantaka//Sonic Titan, who were on tour together.

Last Sunday, Gallery 5 presented a matinee show featuring buzzworthy bands Perfect Pussy and Yamantaka//Sonic Titan, who were on tour together. The show’s early start time was arranged so that it wouldn’t conflict with the Woods show at Strange Matter later that evening, which was a nice gesture on the part of cooperative local promoters. The problem with going to matinee shows, though, is that it’s hard to get the timing right. You have to account for the insanely early start time–5 PM, hours before typical show o’clock–but also be aware that the venue will want to start the show as late as they can, so they don’t disappoint the inevitable crop of latecomers. I am totally paranoid and take “better safe than sorry” to an illogical extreme, so I ended up arriving over an hour before the first set began. And yet, all three bands were so good, it seems in hindsight like a much better alternative than showing up late and potentially missing something. 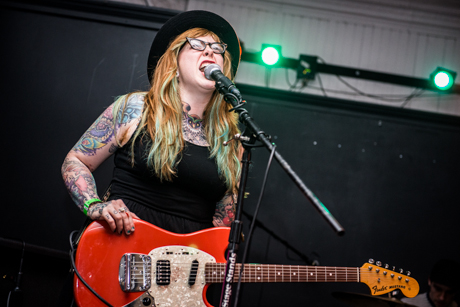 Green Dreams, a Rochester NY band whom I kind of hope named their band in reference to Game Of Thrones, kicked off the music for the evening. This female-fronted trio played loud, heavy punk tunes that had some Riot Grrrl influence but seemed much more indebted to noise rock bands from the same era (by which I of course mean the early 90s); not just fellow female-fronted bands like Babes In Toyland or Hole circa Pretty On The Inside, but even the Jesus Lizard or Killdozer. As they were the only band on the bill I had no prior experience with, I really hadn’t known what to expect, but they ended up really impressing me. Singer/guitarist Jesse Ames’s snarling vocals and wall-of-noise guitar were simultaneously intimidating and hugely fun. The fact that she grinned and danced around through most of the set was a striking contrast with the harsh music, but it worked. The band’s rhythm section mostly faded to the background, but they backed her up quite well. I hope to hear more from this band, and soon. 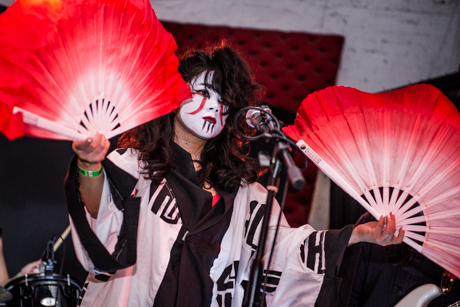 I had come prepared for some pretty complex staging and visual performance elements from Yamantaka//Sonic Titan, and I was not disappointed. The Toronto-based five-piece Asian-Canadian group took the stage wearing face paint and performing amidst red and black geometric-shaped objects placed around the stage. Their lineup was centered around singers Ruby Kato Attwood and Ange Loft; Loft (the tall one) wore a sleeveless black jean jacket with “YT//ST” written in metal studs on the back, while Attwood (the short one) was dressed in ceremonial robes and carried a bell. During the songs, Loft played percussion and danced around inbetween her vocal parts. However, Attwood mostly remained stock-still, generally striking poses that involved a solemn countenance and hand gestures that I’m pretty sure weren’t intended to be taken seriously. She frequently held up the devil horns for entire songs, the double meaning of which I’m sure she was aware. 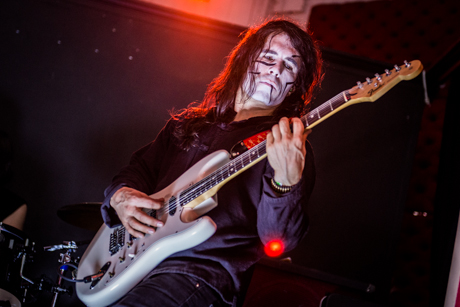 The songs were psychedelic in nature, but not what I would call “freakouts”–their repetitive grooves were focused and featured little soloing. Instead, they were generally vehicles for the vocals of Attwood and Loft, who, rather than trading off lines or verses, tended to sing differing vocal parts simultaneously. When combined with the complex light show and the monochromatic face paint and clothing worn by the entire band (white, red, and black were the only colors in evidence onstage), the overall effect was of a theatrical ritual. Everything I’d heard about Yamantaka//Sonic Titan drawing influence from Asian operatic forms was proven true by their performance. 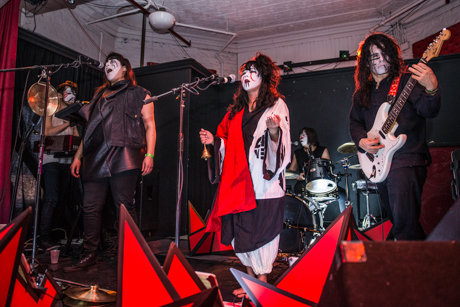 The group’s penultimate song was “One,” the single from their recently released second album, Uzu, and the song that originally drew my attention to their music. “One” brought the tempo up to previously unexplored heights, as well as raising the group’s overall volume and intensity levels. Indeed, it felt like the whole set had been building towards that moment. While early on, the Hammond organ had been overpowering the guitar due to volume inconsistencies, by this point the sound mix issues had been ironed out and the guitarist was cranking out some excellent distorted leads. Combined with Alaska B’s pounding drums and Attwood and Loft’s hypnotic chants, the overall effect was to turn “One” into an outright headbanging anthem. The entire crowd was caught up in the moment, and people in the front rows danced ecstatically as the song reached a double-time crescendo. 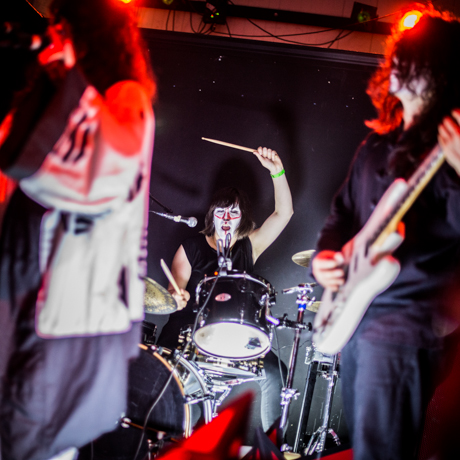 It seemed impossible that the band could maintain this level of intensity, and I expected the set to end once “One” concluded, but instead they kicked things up even further with a storming performance of “A Star Over Pureland,” from their self-titled debut. As heavy as the riffs on “One” had sounded, this song was even heavier, and the final extended passage, during which Attwood, Loft, and Alaska B carried on a wordless three-part chant for several minutes, was absolutely transcendent. If Yamantaka//Sonic Titan had ended the set by climbing into a spaceship and blasting into the stratosphere, it would have seemed entirely appropriate. 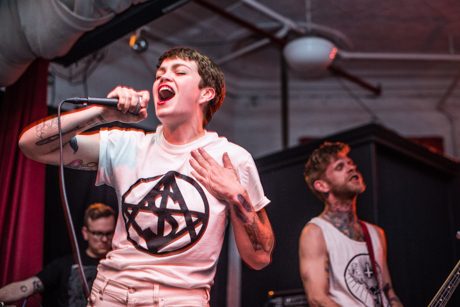 Having to perform after such an immersive and mindblowing festival for the senses seemed like a daunting challenge for Perfect Pussy, and I had to wonder whether they secretly hated having to follow Yamantaka//Sonic Titan every night on their current tour together. Rather than seeming like a letdown, though, the scrappy Syracuse punk band managed to distinguish themselves by being a contrast from Yamantaka//Sonic Titan’s performance in every aspect except quality. Taking the stage in their street clothes, with no special lighting or props, Perfect Pussy proceeded to blast everyone in the room with a short, sharp shock of a set, laden with feedback and delivered at warp speed. I made the unfortunate mistake of showing up without any ear protection, which wasn’t really a problem during the first two bands but became a pressing concern once Perfect Pussy started playing. I should have known better; having listened to their records plenty of times, I knew that harsh, trebly noise is an inextricable part of their sound. Rather than tough it out the way I usually do under those circumstances (why yes, I do have significant hearing damage–kids, don’t try this at home), I ended up plugging my ears with my fingers for the full duration of Perfect Pussy’s set. It was necessary, believe me. 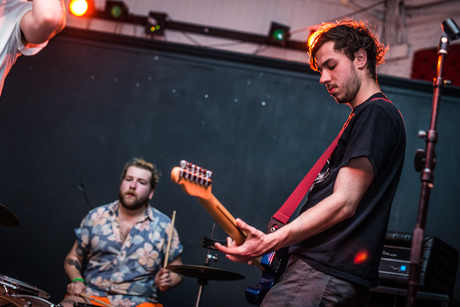 Singer Meredith Graves has drawn a lot of attention for her outspoken nature and soul-baring lyrical content, but in a live setting, she came across as a comfortable master of ceremonies, making jokes with the crowd as technical difficulties delayed the start of their set, and expressing her thanks at the warm reception they were receiving. They deserved it, though–underneath all the feedback, their passionate set was tight and energetic, and their driving hardcore riffs, while not the fastest ever, were the perfect speed to get the room stirred up. There was a significant pit during their set, but fortunately, everyone was dancing together in a harmonious fashion, with no buzz-killing violence or ignorant behavior. Graves’s vocal delivery had an old-school feel–yelling rather than screaming–and her active stage presence made her a joy to watch. “Interference Fits,” the relatively lengthy (three whole minutes!) centerpiece of their debut LP, Say Yes To Love, was a particular highlight, as the band took the opportunity provided by its slightly slower tempo to lock into a groove. Graves put everything she had into the lyrics, and when the song reached its devastating midsong pause, in which she screams “Since when do we say yes to love?” over a brief moment of silence, the sudden return of the song’s main riff seemed to knock her off her feet. She crashed down onto the stage, yelling the final verse from a seated position as the song drew to a dramatic climax. 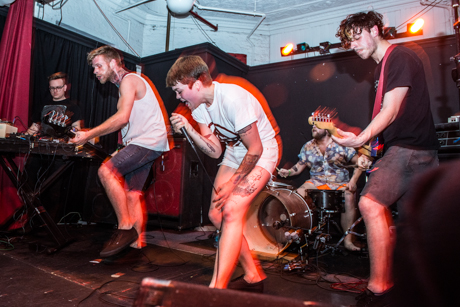 Graves had joked about Perfect Pussy’s “notoriously short set” while they were resolving the pre-set technical difficulties, and the band lived up to her humorous promise, ending their performance after seven quick songs and a long synth-noise coda from keyboard player Shaun Sutkus–during which the other members began breaking down their equipment, rendering any potential demands for an encore impossible to fulfill. There’s certainly something to be said for leaving a crowd wanting more, though. And let me assure you, the next time Perfect Pussy–or any of the bands on this bill, for that matter–come back to town, I’ll be there. Next time, I’ll bring earplugs.