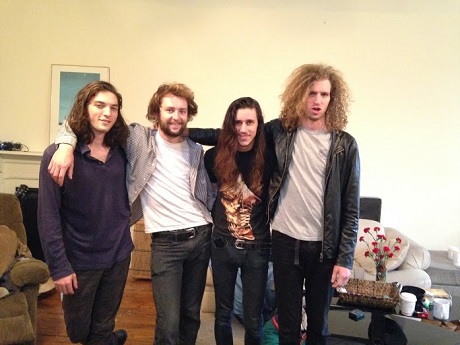 The positives about playing house shows?

The members of Thai Sun, reputedly named for some combination of Mike Tyson, Tyson’s Chicken, and a character in an Australian condom commercial discovered on the Internet, love playing rock and roll music.

More importantly, they love what it affords them: the opportunity to create and collaborate while hanging out with their best buds, partying, and connecting with others along the way.

As guitarist Jack Olson put it, “Music is the best thing about being alive…that’s just a fact…not to sound like a total douchebag, but it’s better than getting laid or doing any drug,” he said.

More than just playing music, the band loves to play live. In fact, up until this past Friday’s release of a new EP, that’s all they had ever done, other than what they had recorded live using a single microphone in a garage in their early days.

“We had a lo-fi era,” Olson joked, sitting around a coffee table with his band-mates, smoking cigarettes in the living room of his shared third floor apartment on West Broad Street.

The room was loaded with instruments: a drum kit featured prominently against one wall, with amps, guitars, and effects pedals strewn everywhere else about the bare wooden floor. A layer of grimy residue and dust coated everything, including the rancid, week old bottle of Naked juice and the framed mirror on the coffee table. The walls were alternately bare in places, and then loaded with thrift paintings, home made drawings, and a sombrero. 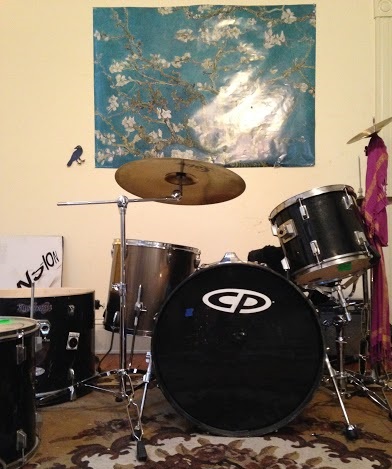 The band, made up of McClung, Perkins, Olson and drummer Chris Noonan, brought to mind the skinny white dude with long hair and flowery shirt aesthetic of Jimmy Page, circa 1975.

When asked their preferred venue to play, surprisingly, members professed their love of house shows.

“The best part about house shows…you’re right there with the crowd…you get to get black-out and play the show…its not just about getting drunk…because you’re partying with the crowd,” Noonan said.

The dudes in Thai Sun, while irrefutably party dudes in the vein of Michelangelo of Ninja Turtles lore, play music for the right reasons, and with the right ethic. They’re tight from hours of practice, but not in a Black Flag, blistering power chords with time changes fashion. They play riffy, psychedelic hard rock more akin to Led Zepplin or Black Sabbath, but at a hardcore pace.

They don’t come out with records every week because they’re too busy playing house shows, travelling up and down the east coast, or hanging out in the living room coming up with something new. Rather than spending hours recording, they’re constantly jamming and innovating to make old songs new.

Olson said that’s even the case with songs on the new EP, which they recorded in July.

“Those songs don’t sound the same way anymore, most of them,” he said. “They’re always evolving. “How could you ever finish?”

As Olson speaks, his fellow band members stare at him, blankly.

“Honestly, I was watching a Brian Wilson documentary with a lot of Picasso quotes, they were saying that shit,” Olson said.

His fellow band members crack up, laughing at his poignancy. He concludes, “Never finish a picture dude.”

Beyond the band’s willingness to allow their songs to evolve in their live set, they also choose to forgo the ego driven trend toward having a single credited songwriter.

According to Perkins, all band members write songs together, so it’s hard for “the whole band to pull up a blank.”

“We all write every song so there’s always something new.” Perkins said.

The egalitarian ethos goes beyond songwriting. The band members champion the DIY network of bands willing to share floor space with other bands.

“I can hit up some dude in Philly I met there and they’ll try to book us a show, and he can hit us up and we’ll try to book them a show,” McClung said. “There’s trust…it’s the DIY scene, it’s a community.”

The band lists off the friends they’ve met through the music scene, and recites the names of the bands and individuals that have helped them along the way, and those who they have helped, given the opportunity.

But nobody else quite gets the band the way they get each other.

“We’ve been playing together for so long…we can all just take it wherever we want to and we’re all always on the same vibe,” Olson said.

Other band members agreed that there’s nothing quite like getting to hang out with your best friends all the time.

As Perkins put it, “After the show, I just want to be with these guys for a second, smoke a cigarette, sit in the van, eat a pizza and be like, ‘yeah, that was sick!’”

The band will play at Circle Thrift this Saturday, Nov. 14. Or, for a more authentic Thai Sun experience, check their Facebook page for upcoming house shows on Nov. 19th and 21st.