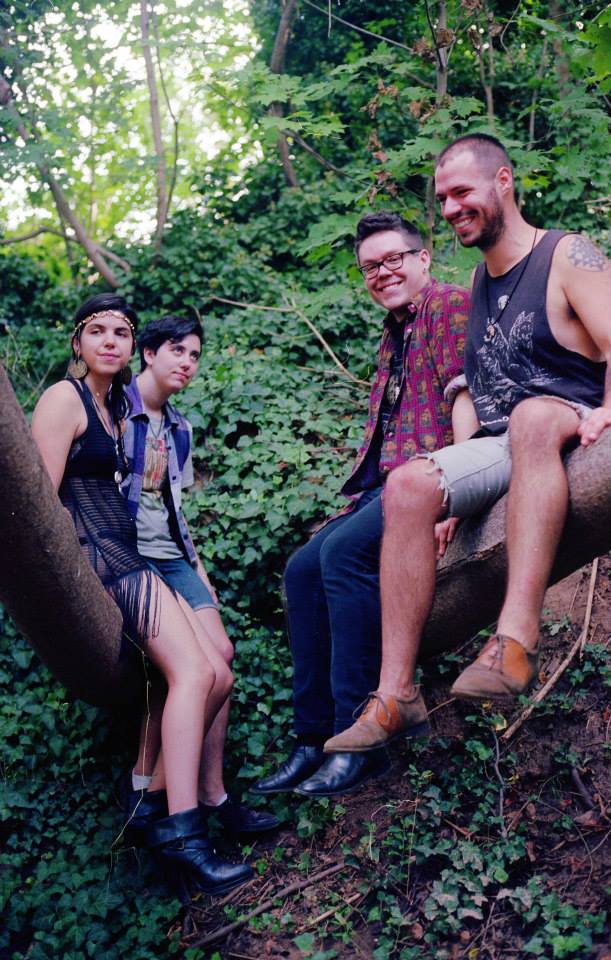 We’ve been keeping you posted on the new Heavy Midgets album, Super King, which is already guaranteed to be one of the best RVA releases of 2014, and we were planning to premiere a song from it just before the album’s release date.

We’ve been keeping you posted on the new Heavy Midgets album, Super King, which is already guaranteed to be one of the best RVA releases of 2014, and we were planning to premiere a song from it just before the album’s release date. However, we kinda got scooped–although physical copies of Super King won’t be available until the official record release show on January 30, the album has appeared for sale in digital format on Bandcamp, CDBaby, iTunes, and other places. So it may be that you’ve heard the song we’re about to present to you before. However, we guarantee you’ll hear it in a different light from now on. 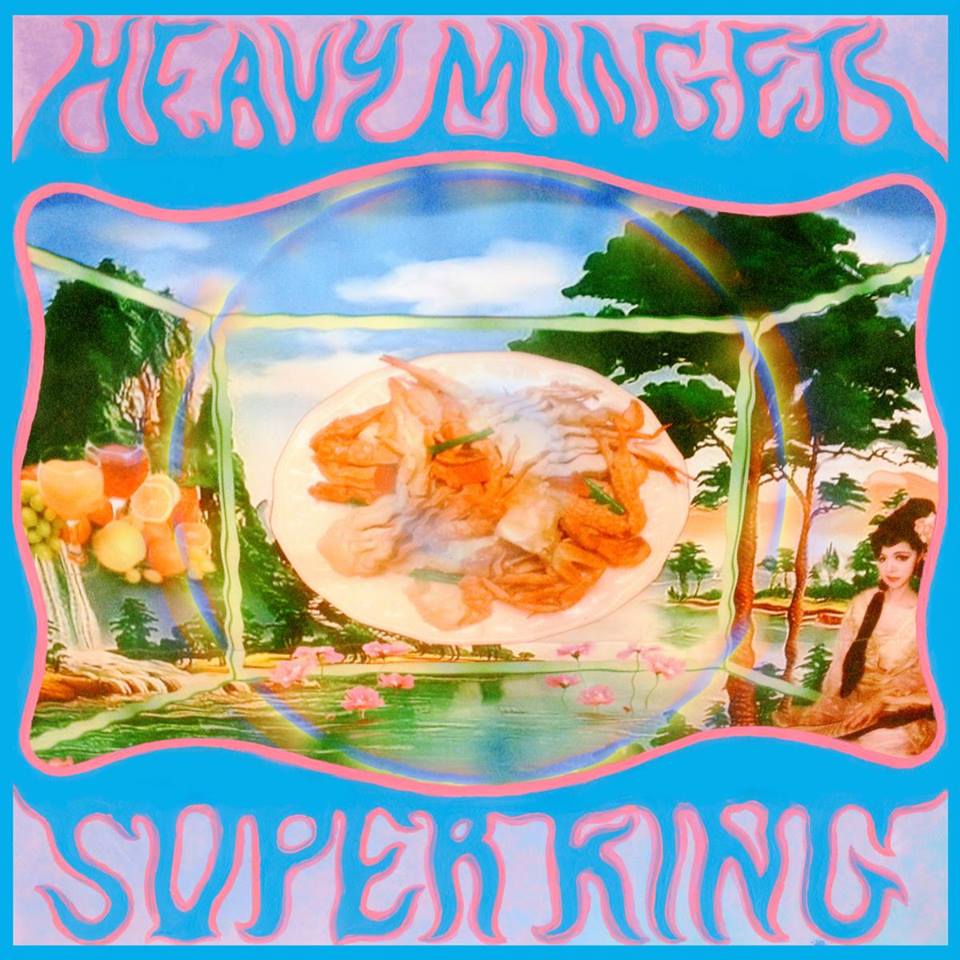 After hearing an advance copy of Super King, I chose “Dynasty” as the song from the album we’d post here on RVAMag.com. The song stood out to me from my first listen–with its jangly guitar riffs and Charlanne McCarthy’s excellent vocal melodies, it seemed like an obvious next step from “Safe On Your Mountaintop,” the song from Heavy Midgets’ 2012 split LP with Tungs that first made me fall in love with the group’s great sound. I was also incredibly enamored with the song’s remarkable coda, in which the tempo slows and lead guitarist Ian McQuary lays down a noisily beautiful guitar solo reminiscent of J Mascis’s work on the earliest (and best) Dinosaur Jr albums.

Not knowing too much about “Dynasty”‘s lyrics, I reached out to Charlanne McCarthy for some comments on the song. I was impressed to receive an in-depth essay back from her, in which she discusses her childhood experiences as a member of Reverend Sun Myung Moon’s Unification Church. I felt I’d be doing my readers a disservice if I held back any of what she had shared, so listen to “Dynasty,” and read Charlanne McCarthy’s comments on the song below.

This song was pieced together throughout the course of a few years, though the seeds of its origin were planted even before the conception of my existence. I’m looking through song journals I’ve kept, trying to figure out when I first started writing “Dynasty.” I used to date everything I created in high school, whether it was a chord progression or a panic attack I was exhausting through words. But upon entering my twenties, I have gotten out of the habit of obsessive timekeeping, as the years fly by too fast.

My personal creative process is a mystery to me, analogous to nature itself. I allow melodies and lyrical phrases to gestate inside my consciousness and they grow and season through my life experiences. Premeditation often corrupts the sincerity of the expression, and I will not allow myself to force a song out if it is premature. A sensation of alignment and clarity floods my perception when I feel that something I’m creating is crystallized in its form and I can and often have waited years before I accept that a song is finished. There is a mental database of melodies and phrases I have webbed like a spider throughout my journey as a musician and I pull from this structure frequently, as well as adding onto it when I go through the emotional experience of songwriting. Its the realm where I feel complete self acceptance.

I first heard the melody I sing at the end of “Dynasty” as I was waking up from a dream a few years ago. It was an incredibly peaceful moment and felt like the most beautiful death. Leading up to writing the songs on the album, I would frequently have vivid dreams that were deeply symbolic, and honestly, this has never stopped. Transferring into my music the nearly indescribable inspirations I experienced while asleep, it started to become apparent that my subconscious was trying to communicate to me an awareness that I was ignoring and suppressing while awake, in order to uphold the robotic emotional fortitude reinforced and required to survive in this materialistic society. We are conditioned to place more value on meaningless items made in factories by subjugated people rather than on those very same human souls capable of love. I felt I couldn’t afford to be myself, and was in a consistent state of fight or flight. A combination of isolation and a blinding illusion of powerlessness began to harden and warp my character as I failed to confront the fears residing in my subconscious.

Raised in the Unification Church along with my brother, two sisters, and many other children, I experienced a unique set of psychological and ritual abuses. Considered a cult by those on the outside and confirmed as such by ex-members who’ve been on the inside, the movement was founded by Sun Myung Moon, a North Korean man proclaiming to be the messiah.

Before I was told what love was, it was explained to me that my unavoidable marriage would be arranged. I had to learn to accept that I had no control over my life, and the only value I had as a human was my ability to carry out Sun Myung Moon’s will through the womb. Any positive feelings I had about being a girl were snuffed out by age five, as I started to become aware of the predestined role of subservience expected of me. At a young age I rebelled against femininity; being an extremely intuitive person, I probably recognized the huge disadvantages of being a girl in my given conditions. My older brother and father would bond in the way fathers and sons do, and I would become heartbroken as I sensed rejection from the male experience. I began to hate myself, and haven’t felt comfortable or free in my body until recently.

When I was 13 I went to a church-run abstinence camp. I pledged my virginity to my imaginary future husband, but admittedly the whole time I was imagining running away with half the boys there so I could make out with them. At the end of the ceremony I received a totally rad purity ring that had the phrase “true love waits” ingrained into it. When I came home, the ring fell off my finger within a week, never to be found. I started to realize I was ok with going to hell as the infernal fires of love grew to be impossible to repress, and I became a weird teenager. I couldn’t ignore the very forces that have propelled our human consciousness to this point in space and time since the very origin of life on this Earth.

I finished writing this song a few days after my parents told me Sun Myung Moon had died. Sometimes I don’t like playing this song because it’s so bitter. It’s kind of ugly and not a healthy emotion to reiterate, especially when there is nothing you can do to change the past. There’s the acknowledgement in the chorus of both of us breaking the contracts of our lives, and the resulting disappointment. Ian, John, and Brenn created a beautiful texture for the recording and did not hesitate to have an over the top ending. Heavy Midgets is a not afraid of being a super-emotional band. I think right now music imbued with raw feeling is very important; even the pop music now doesn’t have a shred of human emotion in the vocals as the trend of autotuned vocals leaves every song flat and ineffective. We live in a dangerous time for consciousness. Since writing this song, I’ve started meditating, unlocking doors in my subconscious that were closed. It’s helped me address my fears and let go of them. I still have a lot of inner work to do until I’m completely healed, but I feel myself getting better.

I wanted to be normal and accepted for such a long time, especially in high school when I was going through my darkest times. However, now I realize that most of America is also brainwashed from television “programming,” and feels an overwhelming sense of disempowerment. Because of my experience, I’ve had to purge my conditionings. This has allowed me to nurture a freedom and strength within myself that I otherwise would have never fostered. The energy of transmuting pain into art and spiritual growth is a powerful sensation, and has created a depth and meaning to my life. This has also allowed me to feel deep connections to people’s suffering. My life has not been bad at all if I was able to pull myself out of the darkness; I must help others do the same. It’s been a beautiful experience and I’m no longer bound by feelings of shame and guilt. I finally believe the universe is made of love.

Heavy Midgets’ record release show will take place at Gallery 5 on Thursday, January 30. The show will feature a headlining set from the Midgets themselves, plus performances by Harrisonburg art-punks Malatese, RVA bass/drum power duo New Turks, and local indie rockers Spandrel. Bad Grrrl Records will have cassette and CD copies of Super King available for $6 each. Doors open at 8 PM, and admission is $5. For more info, click here.