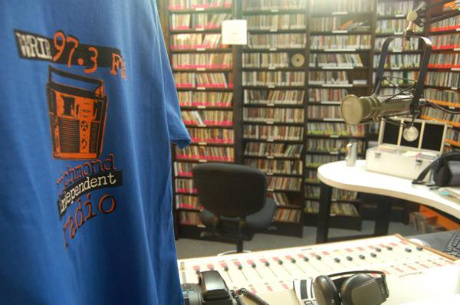 Radio For the Rest of Us: WRIR’s Evolution

WRIR has a long and bumpy history. Its inception started with just a few radio advocates and a little tenacity.

WRIR has a long and bumpy history. Its inception started with just a few radio advocates and a little tenacity.

The idea of WRIR was born from the mind of Christopher “Max” Maxwell, who was frustrated with WCVE from getting rid of two of his favorite shows, “Talk of the Nation” and “Living on Earth”, in 1991. Max decided to go out and get signatures to let the powers that be know that their listeners liked those shows. In the process, he found that WCVE’s listeners were also pretty upset over the cancellation of their favorite evening jazz show, produced by Henry Wailes. He gathered over 2200 signatures and set up a meeting with the station manager, who wasn’t very interested in what his listeners wanted. In a fit of frustration, the manager exclaimed, “If you know so damn much about radio, start your own station.” So Max took the petition and started a grassroots project.

About a year later, Maxwell began the process of raising funds for building a radio station. There was an opening for the airwaves, but he didn’t raise enough and a religious organization got it instead. Realizing that there were too many regulations and that financing was beyond his means, Max became involved with the Virginia Center for Public Press (VCPP) to lobby the Federal Communications Commission to create LPFMs – low power, non-profit radio stations that can only use under a hundred watts. VCPP was already an established nonprofit, and the idea fit perfectly with their agenda, creating community media for local issues and a different point of view from mainstream media.

During the long wait for FCC approval Max got together with some friends who were already running a pirate radio station called “Oregon Hill Free Radio” and an internet stream called Trinity. Trinity was run by Scott Burger and Leland Maurello. I became involved during the winter of 2000. I had always wondered why the capital of Virginia had no decent radio station. I grew up in Williamsburg, and the College of William and Mary had a superb college station there. I had always heard about WDCE, but who could ever pick it up on their radio in the city? I never even knew VCU had a station until years later when WRIR was on its way. I was even more annoyed by something that happened just before I got involved. In the summer of 1996, a friend and I drove across the country. While we were on the West Coast driving late at night, we would tune into the NPR stations out there. They had late night DJs on from the local community playing whatever they liked! My first thought was, “How awesome is that?” My second: “We MUST do that in Richmond.” So when we got back, I started looking into it. I found out that the NPR stations here, and on most of the East Coast, don’t do that sort of thing. So I was very happy that I ran into the folks behind Oregon Hill Free Radio 3 years later.

After a few weeks I was invited to meet Max, Leland, and Scott, and join in their efforts to be ready and waiting for the FCC to approve the applications. During that time we met with Alan Shinchues, who was then the VCPP president. He was also working on his own dream: a café where socially conscious people could go and have meetings and network with folks. His name for it? The Camel. We made a deal where we would volunteer our time to help build his idea, and he would let us use the basement for ours. We focused all our energy on Internet streaming and christened the new enterprise “Radio Free Richmond”. We still needed funds, and we made a partnership with the now-defunct Orange Door Gallery for a portion of the proceeds. Even though VCPP had been around for a while, they hadn’t been doing any fundraising lately. It was hard to get people involved in a struggling nonprofit that was waiting on government approval. There were a few standouts, though. Tim Kaine, who at that point was a city councilman, helped write and pass a resolution in favor of low-power radio.

By 2002, Radio Free Richmond was fully operational. We were located in a dank basement with old and donated equipment, an Internet stream that could only handle about 15 people at a time, and not much help in the way of monetary donations or volunteer time. We had a couple of local music shows but most of our music was automated.

Then it happened. The FCC granted us our construction permit in May 2003. It gave us 18 months to build, test, and complete our station. We needed help. We put out word to let people know we were having meetings. These meetings were to let people know what we were about and how they could help. There were huge turnouts. People from all walks of life showed up. We gained more live DJs who produced very popular shows like “The Audience Hates You”, “Global-A-Go-Go” and “Stunted Development”.

We never gave up, and thanks to Liz Skrobieszewski-Humes (who used to run “Punchline” with her husband Pete), who joined in August 2004, and some other well connected supporters, the money started rolling in. Things became much easier and we were on the air in January 2005.

Editorial Note: Next week in celebration of our special music issue, Irregular Broadcast: A Selection Of Sounds From RVA, we will be spotlighting a different show from WRIR each day.