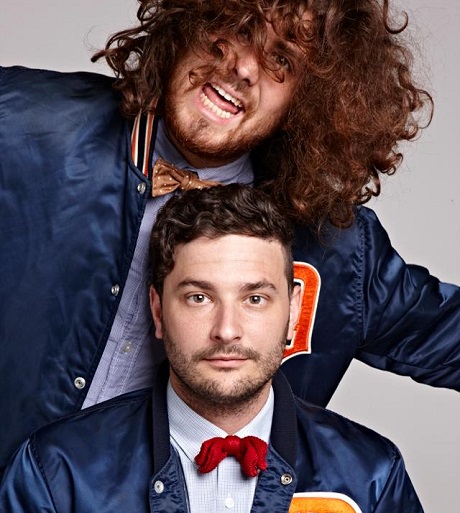 Weird and obscure band names have been part of rock music since its first explosion so long ago, but in the last decade or so, those odd names have increased just as much in popularity as they have in

Weird and obscure band names have been part of rock music since its first explosion so long ago, but in the last decade or so, those odd names have increased just as much in popularity as they have in absurdity. It almost seems like having a peculiar name for your group is as integral today as actually writing music, something some would call sacrilege even if the names are noteworthy and loveable.

There are the long ones like The World Is A Beautiful Place & I Am No Longer Afraid To Die. There are the weird misspellings that you wonder how it should be pronounced like CHVRCHES and then there are the seemingly unpronounceable bands like !!!. Death Cab For Cutie, Fang Island, Das Racist; I think you get the point. There’s plenty to choose from, but it’s easy to say that one of the more outlandish, zany, and ultimately adored band names to come out over the last several years had to have been Detroit’s own Dale Earnhardt Jr. Jr.

So much has been written about the name as well as so many jokes (mostly bad) that it almost doesn’t need to be discussed, especially as the band’s uniquely catchy songs quickly became their most noteworthy quality. Now, six years later, the band is rebranding themselves and moving on from the name that brought them so much attention early on. Unlike other bands though, it’s not a drastic departure as the band is just dropping the “Dale Earnhardt” portion of the name and becoming simply known as JR JR.

“We’d been calling ourselves that for a long time,” JR JR co-founder Daniel Zott told us. “We were making merchandise that just said JR JR for a whole now. It’s just something we wanted to do and we felt it was the right time. We made a mixtape last year using only that portion of the name and no one really made a big deal about it. For us, it was a very natural progression and it’s been a completely smooth transition.”

Zott credited the easy transition to their label Warner Brothers and relayed how it was such a relief to have them handle it. “They’re just such a big machine,” he joked. “I’d worry about it if I was on my own, but they took care of very quickly.” The quick change helped ease fan confusion too and has allowed JR JR to almost leave all traces of Dale Earnhardt in the dust (one last race joke, sorry). But what did their former namesake have to say about the name change? According to Zott, the celebrated NASCAR driver was “cool with how it all went down” and even expressed his feelings on Twitter. “He actually said he was sad it was over so that was pretty hilarious.”

A new band name is not all fans get out of JR JR this year though as their third album titled after their new name came out this past September. The band didn’t try to reinvent themselves musically like other rebranded bands have in the past, but instead delivered a much more focused take on their melodic style that has critics and fans alike declaring it their best work to date. “I think that’s part of the reason it felt like the right time to do the change,” Zott surmised. “The new album isn’t drastically different, but there’s something about it that feels a bit more straightforward, more honest, and a little bit more striped back in showing who we are. It’s a great way to kick off the new name for us.”

The band’s lead single, “Gone,” is already becoming a fixture for radio listeners as it’s creeping it way up Alt Radio and Triple A charts. It’s by and large the band’s biggest success to date, but Zott let us know there might be something else that could surpass it. “I think ‘In The Middle’ on the record stands out and really could be the next song people here on the radio. It’s like Talking Heads, but very JR JR at the same time. It’s super catchy, but also has this weird bridge. It’s a good example of a really good pop song that’s not formulaic, yet for some reason, it’s still super catchy. I just think there’s something special about that song and it’s been going over well with our live crowds even before we released the new album.”

Being able to write pop songs in non-traditional formats has almost become JR JR’s calling card and speaks to their strength as songwriters. “We make way too much music,” Zott explained to us early on in our conversation with him and he detailed just how extensive their catalogue could get when counting unreleased songs. “For every album of twelve songs, there’s probably fifty to a hundred that are written in the same time period that don’t make it. I think that’s true for most writers of most bands because it’s just writer’s block really. To me, writer’s block is not that you don’t actually write, it’s that you write so many things and aren’t thrilled with any of them. It’s very natural to write ten songs and maybe have just one song that stands out. Then you write ten more songs and you have two things stand out. Now you have three songs you’re excited for, but you ended up writing twenty to get there. That’s just how it goes.”

Zott was dismissive of the band’s prolific output in this regard as he pointed out plenty of other bands do the same and amass a huge back catalogue of discarded songs. What’s interesting though is not that JR JR has been able to churn out so many songs, but have done so while mostly avoiding writing songs on the road. “Every once in a while, we’ll do something at sound check, but for the most part, it’s really hard. When you’re on the road, you’re this extroverted version of yourself constantly being a showman, constantly talking to people, and constantly trying to perform. It’s almost like my brain is in a different headspace. When I get home though, I’m very introspective and then very creative. It’s almost like a faucet turns on. I seem to write a lot right after each tour because of that.”

Still, it’s not as if all these songs are never going to see the light of day. Zott was quick to point out that the band often repurposes these songs for other uses or earmarks them for other potential projects like their mixtape from last year Produce Volume 1. “When you make things at the rate we do, there’s a lot of things that you don’t think would work for JR JR or say one of our records, but you can definitely put it out because it’s cool. There’s room to be a lot more experimental or maybe collaborate with your favorite R&B singer. It’s not part of our contract with Warner Brothers so we can immediately put it up online as a free download. Even though it’s a business and this is our livelihood, there’s still something really great about being a musician and putting something out there quickly for free to just share it with the world. It’s extremely satisfying.”

With all of these ideas floating around, it’s not as though JR JR’s about to just put out music for the sake of putting out music. “We’re pretty picky and really hard on ourselves as a band for what we released under our name. It has to fit a certain kind of vibe for us no matter what. We haven’t named it and we really don’t have a criteria or checklist. We just have to feel that it is great for JR JR.” Though he can’t describe it, it’s pretty clear Zott and the rest of JR JR have locked down just how to accurately execute that JR JR vibe and it’s allowed them to only get better and better as they embark on the next stage of their career. Armed with a new name and astounding sonic maturity, the band’s set to distance themselves from the pack much like their former namesake has done so many times on the race track. Unlike Earnhardt though, there’s no end in sight for JR JR.

JR JR plays The Jefferson Theater in Charlottesville this Monay night Nov. 2 with Brothertiger opening the evening. Doors are at 8pm and tickets are $15. For more information on the show, click here.

The Art Of Soundsmithing With Slipped Disc Audio’s ...

Bill McElroy has been operating Slipped Disc Audio in Ashland for over a decade, but his love affair with the sound of music goes back a... READ MORE

The Art Of Soundsmithing With Slipped Disc Audio’s ...

Bill McElroy has been operating Slipped Disc Audio in Ashland for over a decade, but his love affair with the sound of music goes back a... READ MORE