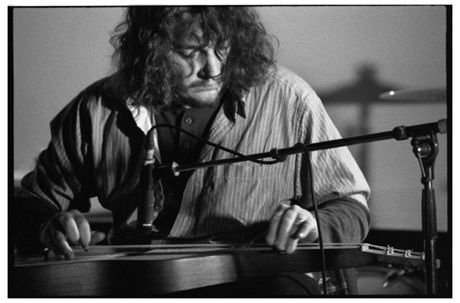 The passing of Jack Rose this past weekend cost us a guitar luminary and a former Richmonder that put his mark on the world of music in a powerful way. The outpouring of grief in the music community is best synthesized by The Daily Swarm here.

I’m taking this opportunity to print part of a piece that I did on Jack in 2004. He was affable, thoughtfully opinionated, and an absolutely mesmerizing musician.

The passing of Jack Rose this past weekend cost us a guitar luminary and a former Richmonder that put his mark on the world of music in a powerful way. The outpouring of grief in the music community is best synthesized by The Daily Swarm here.

I’m taking this opportunity to print part of a piece that I did on Jack in 2004. He was affable, thoughtfully opinionated, and an absolutely mesmerizing musician.

A couple of years ago, while I was still working towards the yawning monetary black hole that is a BA in English, I spoke with one of my favorite guitar players, Jack Rose, who also happened to be a graduate of VCU and a member of the seminal band Pelt. At the time, Rose was featured on the cover of The Wire magazine, and helping to spearhead a revival of acoustic music that combined elements of folk, bluegrass, psychedelic, and avant-garde to create some truly mind-melting music. It’s also worth noting that even though this was conducted over email (and never published until now) it’s one of the most interesting interviews I’ve ever conducted.

Landis: I guess we should start off by talking about your musical roots in Richmond.

I’m originally from Fredericksburg and I went to VCU (1990-1995). When I first got to town, I was pretty confused musically and I felt like I really didn’t fit anywhere. The first two bands I played aren’t worth mentioning because the music sucked. I wasn’t hooked into the creative aspect of the “scene” for a couple of years. I joined a band called Ugly Head sometime in 1993, it was the first band where I felt like I was doing something different and interesting. David Reynolds, guitarist, vocalist and main writer, taught me a lot about writing songs

What was the scene like at the time that you were participating in it?

The scene was pretty varied and there were lots of bands competing for gigs and audiences. There was an indie pop scene: Fudge, Schwa, Seymores, etc. A pseudo biker, punk type scene: Mudd Helmut, Buzzoven, Kepone, etc. A Rockabilly/garage rock scene: Chrome Daddy Disco, Hemlock 13. And the art rock/math rock stuff like Breadwinner, King Sour, Alternatives, Labradford and Slang Laos. With a small city like Richmond there’s only a certain amount of space and so there would very strange pairings with bands from different cliques. Plus there were only 1 to 3 places to play at any one given time, so sometimes gigs were tough to get and sometimes toes got stepped on because of certain friendships, alliances etc. Here in Philadelphia, there’s room for everyone and each little scene has it’s own crowd, gigs and venues. So it nice because I know I won’t be sharing a gig some shitty rockabilly band or some Jesus Lizard rip off band.

I was enthusiastic about the pop scene for a while because those shows usually had wall-to-wall pussy in attendance. But the pop music that came out at that time was really awful shit, Just a bunch of art fags whining about not getting laid. I thought the whole biker/tattoo/punk thing was pretty stupid and most of the fans were idiots. I really liked Buzzoven because they were not a pose at all and were genuinely scary. I saw one show of theirs, it lasted about a minute or two. The singer threw a mic stand into the audience twice and hit someone in the back. He almost got in a fight with the meathead running the soundboard on stage. Breadwinner was great, although I never saw the shows, the singles still hold up. Labradford’s 1st 2 lp’s were pretty good and live they were okay. You would figure Pelt or Ugly Head should have fit in nicely here, but folks in this scene didn’t particularly like us either.

I did meet a lot of nice people as well and generally had a pretty good time when I was there. Mama Zu’s is still the best Italian restaurant; I still haven’t found a joint in Philly that’s even in the same league with that place. Plan 9 is still a great store and most of the folks I’ve met working there were all pretty nice. I was pretty sad about the Hole In The Wall closing. When I left, I was pretty happy to get out of there though.

Do you keep tabs of anything coming out of Richmond or the surrounding areas now? If so, is there anything that has managed to catch your attention?

Nope. I did hear Pen Rollings is playing guitar again in a new band called Loincloth. So I imagine that’s pretty killer. When I left Richmond, I had burned all my bridges. I have a few friends who still live there, but I might see them once every two years. My brother lives there and plays with the drummer and guitar player from Ugly Head. They’re called the Gepettophile, there pretty cool and hardly every play out, which is a Richmond tradition. Tommy Bircheit is still doing cool stuff and I heard he got Ian Nagoski, Howie Stelzer and Nmperign down for some art show gigs. Richmond is a rock town and any sort of avant-garde music is going be met with contempt.

How do you feel about many people’s reception of last year’s Wooden Guitar [Released in 2003] compilation as some sort of modern musical revelation?

I think it’s great that cd is out there because the genre/form has been dominated by Windham Hill bozos for many years. It’s nothing new, but any real creativity and soul has been absent from this style of music for so long. Glenn Jones, Harris Newman, Six Organs of Admittance, Willie Lane, PG Six and Matt Valentine are some other folks doing great things with the acoustic guitar now.

Do you feel any particular stylistic kinship with the people who were on the compilation with you?

Absolutely. Rick and Alan Bishop from the Sun City Girls have been musical heros of mine for the past 10 years. I think Steffen is the best acoustic guitarist on the planet right now. Tetuzi’s track on the comp is my favorite on the CD and his boogie LP is pretty amazing.

Would you consider playing a show in the Richmond area again anytime soon?

Sure if the pay is decent.