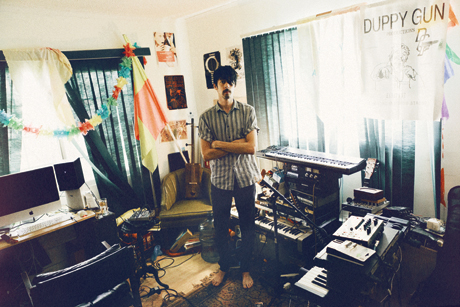 If there’s anything difficult, perplexing and sometimes puzzling about the music of Sun Araw (and we assert that there is plenty that fits such a description), it certainly doesn’t stem from anything we recognize as mysterious.

If there’s anything difficult, perplexing and sometimes puzzling about the music of Sun Araw (and we assert that there is plenty that fits such a description), it certainly doesn’t stem from anything we recognize as mysterious. Rather, we find Sun Araw to be among the music least indebted to mysteriousness – while at the same time finding it at the very apex of musical exploration and elucidation (and, it should be noted, amplification).

Mystery implies that, despite the cosmic quest inherent in everything burnt by the Sun Araw, there remains something unexplained. Whether it’s last year’s Ancient Romans or the more recent, Jamaica-born collaborative release with M. Geddes Gengras and The Congos (entitled Icon Give Thanks), we find Sun Araw’s music most explainable, knowable and enjoyable.

What we do find in Sun Araw, however, is music with an almost superhuman capacity for not mystery, but that close cousin, mystique. In the way that we define mystique – as the application of special knowledge, esoteric skill and heightened interest to a particular calling – there would seem to be few artists that reek of mystique as much as Sun Araw.

It’s no mystery that the recordings of Sun Araw are really the recordings of California’s Cameron Stallone, along with whoever is around and whatever might be the focus. And it should be no mystery to you, gentle reader, that we feel very fortunate to share this interview with Cameron (which was conducted before his appearance at Austin Psych Fest 2012). Enjoy. 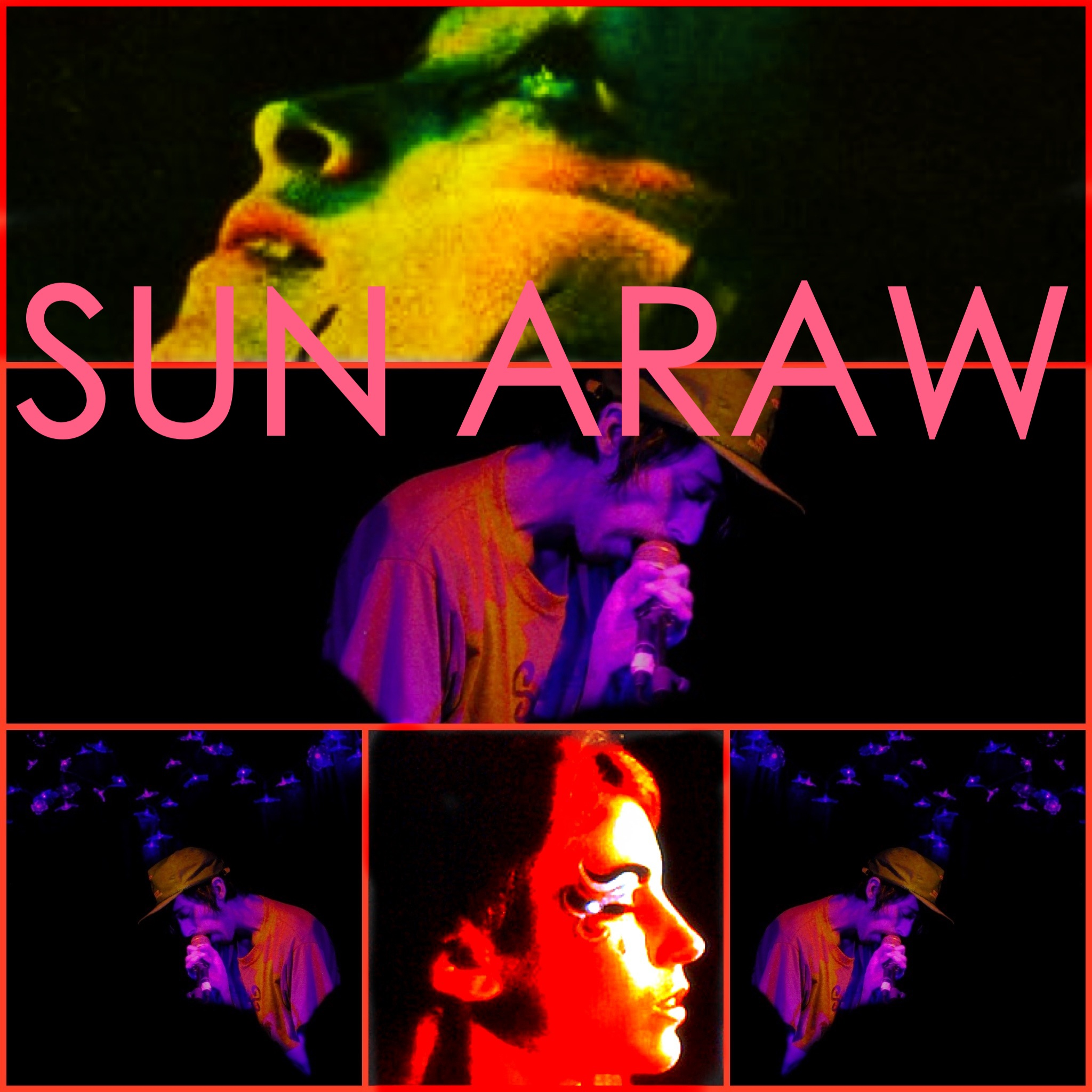 One needn’t look far to find references to the sun spread liberally throughout social, cultural and spiritual mythology – nor is the sun any stranger to being referenced by or an influence upon music in general. And sometimes – in the case of Sun Ra, and perhaps Sun Araw – we encounter the two together. What meaning does the sun hold for you from a musical perspective? What did the name Sun Araw mean to you when you originally decided upon it, and how has that meaning evolved over time? Would it be fair to consider Sun Araw to be the star around which your other musical involvements revolve?

I mean, one thought to think is that stars are a model of a certain principle, an energetic principle of nature that I think is somewhat related to us on a scale of concentration, we being the diluted partner. I picked it because I liked the way it looked and sounded, and I dig Sun Ra. It’s sort of something that disappears to me – I don’t really think about it.

What energy or inspiration do you feel you draw by working with other musicians and artists on projects apart from Sun Araw, and do you feel that energy is somehow transferred to your Sun Araw recordings? Can you cite any specific ways a memory of or experience with a collaborative musical effort influenced your approach on Ancient Romans – your work with Eternal Tapestry on Night Gallery, for example?

Man, the jam zone is just sort of something that happens in the space at the present. That is, of course, influenced by every prior – and also every future – experience, but … yeah, man – I try to really not be conscious in the way you’re describing, though I’m sure it’s all woven up. 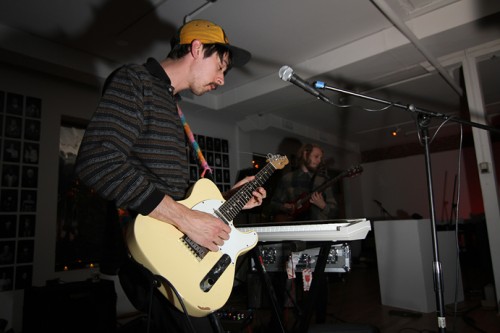 Ancient Romans strikes us as perhaps your most expansive work to date – not necessarily in the quantifiable areas of song length or pieces of pressed vinyl (though there is that), but in a qualitative sense as well. Sonically, much of the album evokes the feeling of stargazing or otherwise contemplating vast stretches of dark, unknowable things. Was there a conscious goal in mind when recording Ancient Romans? How likely are you to revisit a recording like Ancient Romans after its been pressed and let loose into our world?

I don’t really listen to things once they are done. I’ve listened to them hundreds upon hundreds of times up to that point. Glad you dig it, man. It has a weird space in it for me, too, but that’s always unconscious. Attempted unconsciousness.

Is there a distinct moment – or a series of events – that you recall as helping you trust your improvisational instincts in creating music? How has the evolving process of trusting and following an improvisational path impacted your life outside of creating or performing music?

There was definitely a point where I stopped trying to write songs and started making music in a different way, but there was a long intervening period where I wasn’t doing music. So it wasn’t based on any particular moment. Working intuitively helps with living intuitively, which is something I’m pretty interested in. 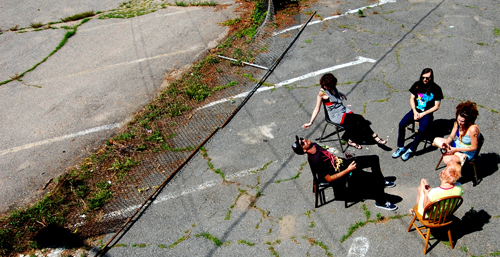 Composer Carl Orff developed a system for music instruction building on an approach that many children gravitate towards naturally – singing, chanting rhymes, clapping, dancing and keeping a beat on whatever is around. Can you recall a time in your youth when you first became intrigued with making your own music? What was the first music you heard that made a truly lasting impression on you in your youth? As you’ve grown older and engaged in more musical experiences, how do you think that nature of your creativity has evolved?

Not really, honestly. Getting a guitar was a big deal. Things have changed significantly since then.

Would you care to comment on the rumor (the rumor that we are attempting to start right now) that your next recording will be a tribute to the pop, rock and legislative efforts of one of the most notable Californians of the 20th century, entitled “Sunny Araw Bono: The Beat Goes On Patrol”? 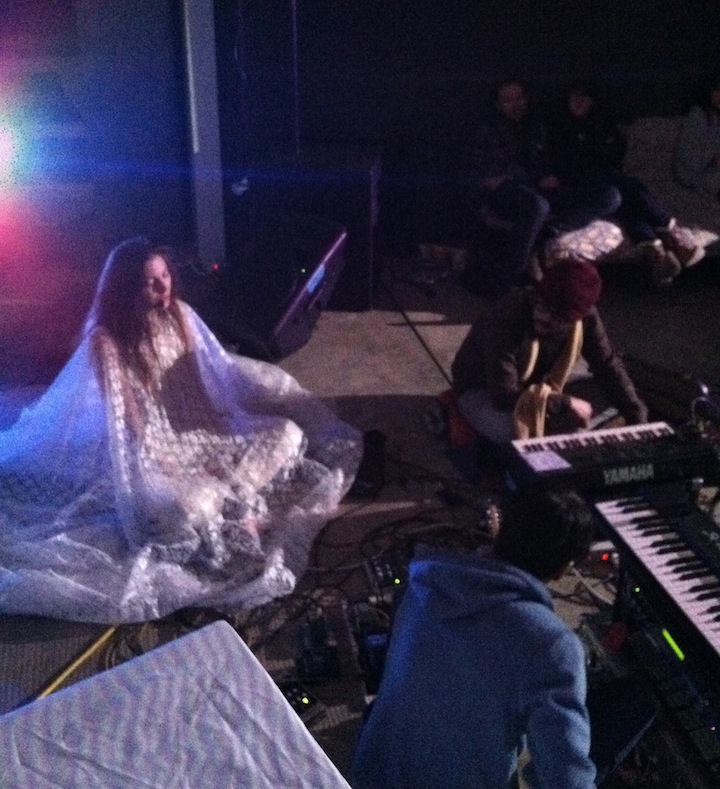 What are the aspects of live performance that you enjoy most? Can you identify a performer or band whose impact upon you musically came initially and directly from seeing them perform their music live?

Playing in a way that’s building a structure. I think of the songs sort of like environments that have certain principles, and within them you can sort of generate whatever. It’s that generating thing that is what I really enjoy, when I’m playing live and also when I’m composing stuff. Seeing bands in general was inspiring – always made me want to play music.

How did you first hear about Austin Psych Fest? Are there any other bands on the line-up that you are particularly excited about having the chance to see when you’re in Texas?

Man, it’s like a dream-list of homies. I’m really stoked to hang. The entire line up is sweet.

Alan Watts (who loved all Magic Lantern LP’s – we’re sure of it) once said the following:

“A priest once quoted to me the Roman saying that a religion is dead when the priests laugh at each other across the altar. I always laugh at the altar, be it Christian, Hindu, or Buddhist, because real religion is the transformation of anxiety into laughter.”

What’s next for Sun Araw?

Just finished a new album called The Inner Treaty – trying to get it out by summer. Lots of tours.