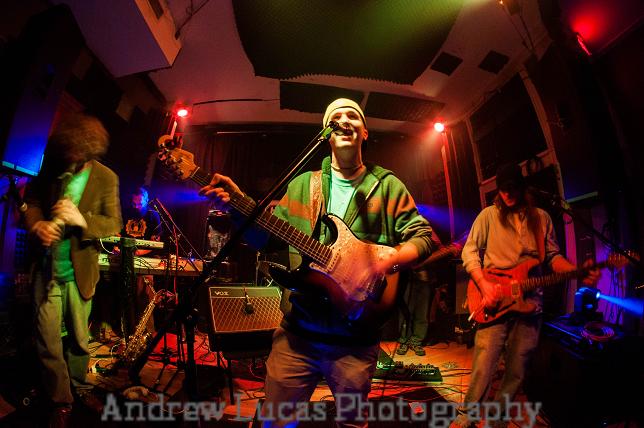 Big Something Makes A Big Noise At The Camel

Big Something, previously known as Anonymous, is a band out of North Carolina that blends various styles of music into their own oversized rock groove. On Thursday, January 16, the Camel’s walls were bursting at the seams due to Big Something’s BIG sound, which has been referred to as arena rock. The members of the band all have different musical interests and /influences, yet somehow, they come together to create catchy songs that sound as natural as any one genre on its own. From electronica to folk and Americana, they combine it all, yet through their musical expertise, each song still has it’s own Big Something sound. One way or another–whether it be with Nick MacDaniels’s emotional vocals and thought provoking feel-good lyrics, Jesse Hensley’s psychedelic guitar solos, the funky keyboards of Josh Kagel, Casey Cranford’s sax lines, which get you shaking your bottom half unknowingly, Doug Marshall’s rhythm-thumping bass, or Ben Vinograd’s nonstop energy on drums–this band will catch your interest.

While Big Something plays at many festivals filled with jam bands, they can just as easily appeal to people that prefer more structure in their songs. As the word on this band slowly gets out, their shows in Richmond become more and more interesting and fun. As the Camel has recently been forced to stop the music by 11pm on weekdays, I was worried about the crowd size this time around, since most people don’t even get their until 11pm when I attend shows here. However, this proved to be an unnecessary concern. In fact, this show was possibly the biggest crowd they’ve drawn yet at The Camel. The light show was also the best that I’ve seen them have at this venue. Many people in the crowd seemed to be singing along, which led to Nick flashing his contagious smile even more constantly than usual. The crowd was into it, and the band responded. They played sincerely, high-fiving fans and seeming happy the entire show. These guys really love to rock people’s faces off, especially when there is a sympathetic relationship with the crowd.

Playing 16 songs, including only one cover (“Sledgehammer” by Peter Gabriel), they played through their entire two-hour time slot, as I expected. They ripped through a large selection of some of their older songs, and also played a few newer songs that are featured on their new self-titled album (which you can stream for free at their Bandcamp page). This perfect album shows that they are a great studio band on top of being a great live act. The sound quality and production is impeccable. Songs that appeared on their previous live demos can now be heard in an entirely different way, thanks to the band’s precision and creativity in the studio. Although it is free to stream, I do still recommend supporting these guys and purchasing a hard copy of their album whenever you get a chance.

With this philosophy on getting their music out there to as many people as possible, Big Something have the potential to make it big (no pun intended). It can be tough for bands that have yet to be established in larger venues to get some people to give them a chance. However, bands who are willing to play small clubs and improve their craft over the long haul can end up with an edge due to the quality of their live product. The path Big Something is on now could lead to them playing arenas as big as their sound. Their cooperative attitude towards working with other bands and holding multi-genre shows should help Big Something to gain popularity through unconventional or untraditional ways. They even hold a festival every year in North Carolina called the Big What where they invite a lot of regional bands out to come play. They radiate positive feelings through the music and atmosphere of their live shows, which will ultimately make fans out of anyone willing to give them a chance. I recommend checking these guys out the next time they come to Richmond. You won’t regret it.

Topics: Big Something, The Camel