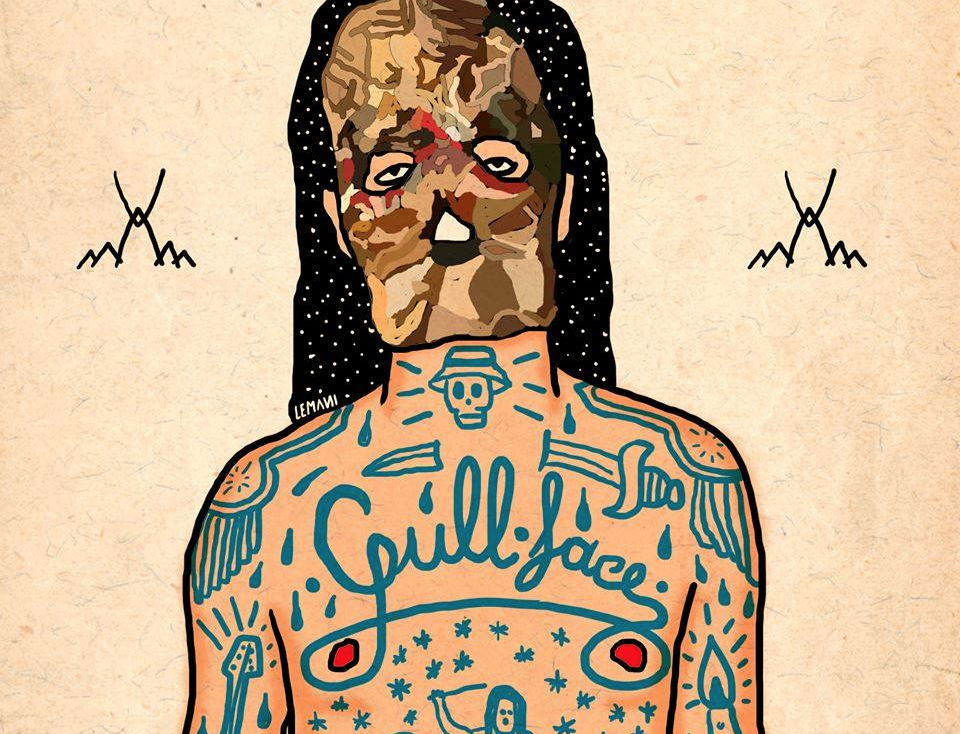 Imagine a musician, hobbled by a leg injury, locking himself up in a remote shack for a week to complete a new record, and now imagine that man is RVA’s own Gull.

Gull, whose human name is Nathaniel Rappole, has always worked hard in what he’s done. A kind of one-man-band, though he hates that term, is a project which historically consists of raw, hard and fast live shows featuring the performer’s face covered in a skull mask.

His musical journey started years ago, but it’s entering a new phase, one with a few notable changes that also includes a series of record releases with the first, Lurcher, dropping today.

But rewind a bit, for the curious like myself.

I first witnessed the majesty that is Gull as he sped around Monroe Park bungeed into the back of a pick up truck, banging and finger tapping away like an otherworldly sonic beast. But long before that he was just Nathaniel Rappole, a 16-year-old son of an ornithologist living in Front Royal, VA. He started playing bass and noodled around in a few bands. He went to JMU for psychology where he still played music – those in the scene back then probably remember his other project, Snack Truck.

While Snack Truck might have faded, the frenetic mayhem that is Gull continues on to today. Wander through First Fridays or a House show and you’re bound to catch the bizarre spectacle as Gull manipulates his drum set, guitar and looping and effects pedals at the same time.

The minimalist production has always been easy to take on the road and that often found the performer traveling and playing where he could find space. The unique show usually led to great turn outs and so it wasn’t hard for him to develop a healthy touring pattern up and down the East Coast. But the act has gone much further than that as well.

His first big out-of-the-country Gull trip had him joining a family friend on a bike tour across rural parts of Mexico. A friend he’d made on the drive down offered to act as a follow-car bringing not only his sleeping gear but his instruments as well. This led to impromptu performances in the Mexican countryside and in some notable urban spots as well.

“Thats what helped inform me as far as this idea of using music for what its good for – breaking down barriers, offering something in public in this way,” he said. “It’s a good way to open the door and learn about other people’s cultures.”

He said the shows were received well, and he learned a few things about second-world touring in the process. Lamp posts are, evidently, notorious for having plugs in them if you know where to look, so he often would set up in the street using whatever power he could find.

This Mexico trip whetted his appetite for travel and a chance encounter with a friend in Philly lit a fire under his ass for more. After relating his Mexico experience he worked with a few close friends to raise funds for a trip to Africa. They raised $10,000 in a few weeks and used connections from college to develop a destination and travel plan that took him to Kenya with a small documentary crew.

That trip happened a few years ago and the footage, and Gull’s own version of the experience, is still being processed for the public.

“Seeing my own reflection in this way, even though I was coming at it in a way of being open and good, it’s a tricky and fine line,” he said, trying to avoid some sort of white-guy-tours-Africa video. “You can paint a very exploitative picture of a place very easily… Just setting up, playing guerrilla style, in the middle of Nairobi. So many people were just like ‘what the fuck is going on?’”

While his travel has helped inform his music, the production of Lurcher also opened up new creative pathways for the artist.

He’d gone to upstate New York to bury a family member. After they laid his aunt to rest, he tried to honor her memory by taking a dip in her favorite swimming hole, Chautauqua Lake, but the combination of his entry height and the six inches of standing water led to a broken right fibula.

He made it back to Virginia and got patched up – he uses both legs to perform so he figured he’d take the down time (his first since 2010) and turn it into something constructive. He still had shows booked, so he reached out to his brother and asked to borrow a synthesizer, a Juno Alpha 1.

He holed up at his sister’s place in Woodstock Va., in a shack/garage around back, and began developing a new record using the synth, an altered set up that wouldn’t require his broken appendage.

“I used it as an excuse to do something a little different,” he said – this also included additional vocals and using the microphone as a percussion instrument… while also playing for the first time with out his trademark mask.

That’s not to say it was all improvised, he was rehashing some techniques he’d already developed, but playing without a mask was a new venture for the veteran performer. He said the mask had always served a practical function as a hands-free microphone, but its detail and imagery involved other boons as well.

But he did take the mask-lessness songs on the road for a few performances, including one set at Hardywood last month.

“I never felt naked while performing… It felt right, I didn’t feel as protected… it was like doing an acoustic show,” he said. “I could hear everyone talking and everything and that’s hard.”

Another recent show at Black Iris’s Back Bar venue featured a few mask-less songs as well as expanded dancing and movement on the part of the performer. While he might have had less of the mysterious allure, his movements reinforced the “shamanistic” qualities he said the totem provided.

“I never wanted the mask to be a shield, I wanted it to reveal something that’s within, below the surface. The fact that it’s a skull is part of that, revealing something beneath,” he said. “And I feel like we can get caught up in how a person looks. But that’s not to say I haven’t enjoyed some of the benefits of playing with a mask, you can hide a bit, or get over some of those performance fears.”

Either way, Lurcher offers a new take on his classic creative sound.

Stand out tracks include “The Ancestral Knife” and “Walk of the Carpenter” which has a music video you can see below:

Themes of social justice and acknowledging what man has done to itself are also heavy on the release. While he might still be mulling over the Africa footage, he’s doing his best to express his disdain for colonialism on this release in the interim.

He recorded the album with Cyrus Fisher at Lagom Audio/Visual, a Charlottesville-based label and recording space. Gull linked up with Fisher after a show in Harrisonburg about a year earlier and they finally ended up in the studio the second half of last year. The final product is the full length and a few EPs all set to drop throughout 2017.

“It was a lot of fun, I haven’t done that kind of thing since really starting Gull,” he said noting most of my recordings were done live with a few room mics. That’s fairly similar to how Lurcher came about with a few extra overdubs for clarity.

But how have years of world and US travels impacted this record?

“It’s a very human thing,” he said of the drums or procession that forms the backbone for his tracks. “The drums pull you in – we can be separated, but tribalism really comes out.. in the way our brains are wired…. drums are a positive part of that… you see kids, immediately, just taking to drums and start dancing. I’ve seen it so many times, playing here or in other parts of the world – it’s amazing to see so many different types of people being drawn to music I make and drums are a huge part of that.”

You can snag Lurcher here, and keep up with Gull on Facebook here.