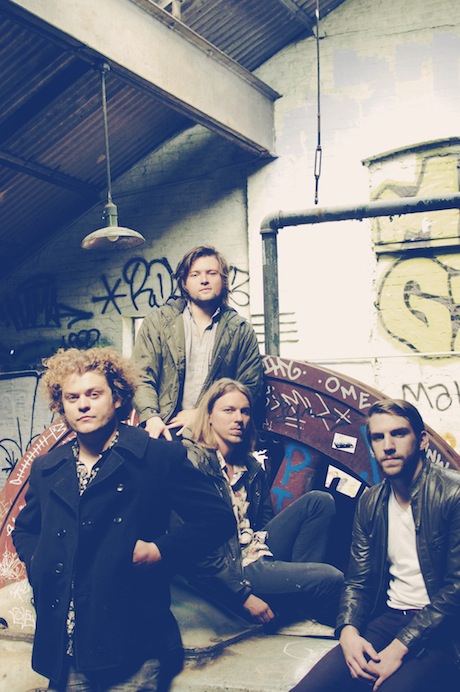 What do we talk about when we talk about music? We talk about the immediate sensations. We talk about how it inspires us. We talk about where it will lead us next. When Sleepwalkers talk about music, they talk confidently with a genuine admiration for the songs of the past, while maintaining an interest in making an impact on the present. This is why their debut full-length, the recently released Greenwood Shade, is catching so many by surprise. Its ephemeral, dream-like sonic qualities contain respectful nods to the sixties and seventies while adding a contemporary spin that doesn’t feel out of place. To get there was an urgent late-night journey that required diving in headfirst and never looking back at what might have been left behind. This is the tale of Sleepwalkers.

Austin and Michael York are known locally for their early efforts in Duchess of York. Formed when the York brothers were still teenagers, Duchess Of York gained a large local following with surprising speed, forcing the rest of the city to take notice. However, as unexpected as their quick local rise had been, their dissolution came even more suddenly. But rather than mourn their loss, the Yorks took this as an opportunity. “When Duchess of York ended, it gave us a second to re-evaluate what we wanted to do,” Austin says. “We started writing songs in a different way. We would think about a riff from a Michael McDonald song and maybe how we could incorporate a feel like that. It was a good chance for Michael and me to start writing from different places and see where that could take us.”

After some time in the woodshed, the Yorks sought out bandmates with which to complete the lineup of their new project. Sleepwalkers became a quartet that included drummer/engineer Alex DeJong and guitarist/keyboardist Brad Heath. DeJong’s involvement at White Star Sound Studios in Louisa became an immediate asset to the group. “A lot of our recording sessions have been super late at night. We get the word that we can have the studio from 10 at night until 7 the following morning, and we just go in and make it happen,” DeJong says. There are also a plethora of available resources at White Star Sound that have certainly helped to shape the Sleepwalkers sound. “There was gear that we have at our disposal that has been used by Van Halen. There was even a tape machine that was Whitney Houston’s own personal machine that we used for some of the record,” DeJong adds.

Meanwhile, Heath is new to the world of music, but this fresh perspective has been rewarding for Sleepwalkers as a whole. Once Heath was introduced to the fold, DeJong noticed a gradual shift for all parties involved. “I know once Brad started hanging out with us and we would head down to White Star, I think we all asked ourselves if we wanted to just do this and see what would happen,” Dejong mentions. “We all have so many different sounds that we are drawn to, and that helps us to just push past where we might typically be comfortable,” Heath adds.

All of these developments were taking place away from the eyes of an audience, and were part of the slow buildup to Sleepwalkers’ first show on November 9, 2013. This wasn’t just a conventional performance but a four-hour experience in which each member took turns showcasing different facets of the project. The evening included short DJ sets, ventures into the world of electro-pop, throwbacks to the seventies, and even synth-pop from the eighties. It certainly presented a strong argument for the idea that Sleepwalkers would be unique and impossible to pin down.

After this show, DeJong encouraged the band to do a quick recording in time for the holidays. The result was the Merry Christmas EP. “It’s an old school idea, to release a holiday record, but I think that’s what makes it kind of cool,” Michael says. “It was like December 11th, and I just got in touch with everyone about doing this quick three-song set of holiday tracks. Everyone was into it,” Dejong adds. The release hit the internet quickly and set a standard for the way Sleepwalkers would operate from that point forward.

The band booked a series of shows in the wake of the EP, traveling as much as they could given their schedules. “It’s not the easiest to hit the road, but when we can, we try to make it worthwhile,” Michael says. The frequent performances didn’t deter the outfit from continuing to record and write new material. “We all just started influencing each other,” Austin says. “Alex was giving us a great appreciation for soul, and we were all collectively going back to look at the eighties. It was building into this interesting set of new songs that would eventually become parts of Greenwood Shade.”

Greenwood Shade was recorded over the course of two weeks, during the wee hours at White Star Sound. Whenever late-night recording opportunities presented themselves, the band would head over and see what would happen. They were on a strict timeline–a record release show was scheduled before tracking had begun. “One thing Austin and I learned in our downtime was that we work much better with deadlines,” Michael says. “We had enough songs for a record. We just needed to make them happen. If we book a record release show, what do we do if we don’t have a record in time? I think that helped influence the album in a lot of ways.”

One thing that Austin is quick to note is that the deadline eliminated any hesitation. “If we were unsure about a song and we weren’t feeling where it was headed, we would just move on. Maybe we would return to it, maybe we would just abandon it. We knew that forcing something to happen that wasn’t [working] was a waste of time, and time was of the essence.” Along the way, a sound was slowly formulating. “With each track, we wanted to really consider the vibe we were going for,” DeJong says. “That’s why I think Greenwood Shade goes in so many different directions. The one thing that pulls it all together is the way that we play the songs together.”

Greenwood Shade was released in time for the deadline, and greeted with rousing acclaim. Musical peers and fans alike fell head over heels in love with the sound and vibe of this truly remarkable Richmond summer record. The record’s production gave it an ephemeral, dream-like quality, which retains the energy of previous York projects while bringing in a modern psychedelic feel. The decision to forsake modern computerized recording techniques in favor of White Star’s classic equipment also played a big role in the final product. “If you hear a pop record that is put out today, everything is so digital. Working in the space that we did helped us keep it a bit more old school and achieve the vibe we wanted for the record,” Michael explains.

The wide range of instrumentation used on Greenwood Shade makes the songs somewhat of a challenge to recreate live. “In all honesty, recreating the way the songs sound on record in a live performance would probably be next to impossible with just the four of us. We have worked with utilizing a bunch of triggers to get some of those sounds into the mix,” Austin explains. However, to some extent, the band is content to let their live and studio sounds be different animals. “Really, I don’t know if we have much interest in recreating the songs live to sound exactly like they do on the record,” Michael says. “It’s what sets the recording process apart from our live performances. It’s never going to be quite the same thing, but both have their appeals,” DeJong adds.

While Greenwood Shade is still playing on the headphones of many Richmonders, Sleepwalkers don’t plan on slowing down anytime soon. “After we made this record, it got me to thinking about how bands used to operate,” Austin says. “Today, a band might put out a record every couple years. Sometimes, it takes close to half a decade. Back in the day, you had The Beatles putting out two records a year, and they wouldn’t sound anything like each other.” Sleepwalkers are already hard at work on another release that they hope will be out by the end of this year. “Steven Spielberg put out Schindler’s List and Jurassic Park in the same year. That seems crazy to me. I still want to see if we can put out a complete polar opposite to Greenwood Shade, though,” Michael adds. One thing is for certain–we can expect another Christmas single. “We had so much fun doing the last one,” Michael says. “Why not just do it again and make it an annual thing?”

While no one, not even Sleepwalkers themselves, could have predicted such a high-quality debut, the recognition and success Sleepwalkers have achieved locally with Greenwood Shade has been an inspiration. Their goals at this point are small-scale, but they plan to keep pushing ahead. “If we could make a living doing this, that would be amazing. For now, it’s just fun to travel on these songs when we can, and just make more and more music together,” Heath says. Sleepwalkers also hope their eclectic sound can encourage fans to expand their horizons. “These days, it can be difficult to break people out of the niches they find their musical tastes leaning towards,” Heath adds. “I hope we are working towards breaking that.” Sleepwalkers will certainly continue to push beyond their own boundaries, and it will be exciting to see what they create in the future. The best part is, we won’t have long to wait.

This article is taken from the latest print issue of RVA Magazine, out now. To read a digital version of the full issue, click here.