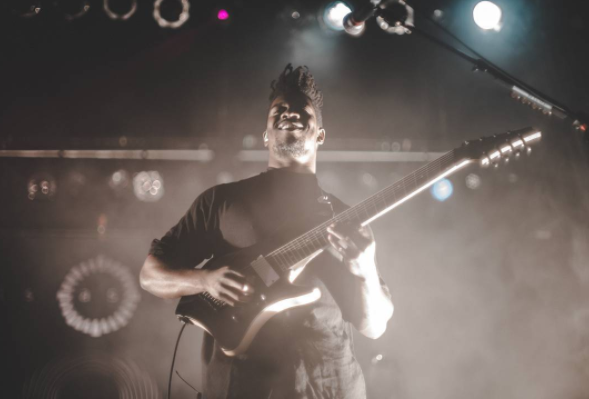 I’ve had two guitar heroes for a little over five years. Before that period, I only had one: John McLaughlin.

I’ve had two guitar heroes for a little over five years. Before that period, I only had one: John McLaughlin. After interesting me hugely with what he did within Miles’ “Bitches Brew,” then securing my vote with the first-gen Mahavishnu Orchestra, finally I found myself basking in some of the most absolutely tiny and specific nuances of my aesthetic/artistic preferences with the original Shakti group from approximately ‘76-’79. Listen to “A Handful of Beauty” for some of what I consider essential McLaughlin.

Eventually, as some jazzers do, I found some great listening in a few select metal acts, most with a prominently progressive sound. However, none had truly struck that chord (respectfully intended) with me that
unquestionably elevates my attention the way your hero or heroine would. I was struck suchly after an old jazz-turned-metal guitarist friend played Animals As Leaders one day at work.

Next came Weightless, which in addition to expanding his harmonic concepts into augmented and whole-tone areas brought the inclusion, or perhaps just the stronger highlighting of, several advanced guitar techniques such as thumping (Earth Departure’s intro), “swybrid” picking (Cylindrical Sea’s theme) and more of the unique tapping combinations (Isolated Incidents) that became signature with oldies like Soraya or Behaving Badly.

Then The Joy of Motion arrived last spring, with much anticipation and to great success. It featured a slightly more relaxed vibe than before, and certainly a less stark aesthetic than its predecessor. The guitars were warmer (The Future That Awaited Us and Another Year both stand out), and the songs had much more groove than pulse (again, Another Year and Physical Education).

Featuring a much more substantial acoustic offering than the first two records with such songs as Para-Mexer with its detuned and frantically fun lines, the album The Joy Of Motion felt like they knew they were stepping in the right direction. The fast playing was still there (Nephele and Mind-Spun) but more reserved, kept out of sight by an increase in feel/feeling and detail in the compositions.

That brings us to their newest, The Madness of Many released in November which I’ve reviewed here already. To that I can, here now, how that translates to the live experience from of their recent tour stop at the 9:30 Club in DC on December 4..

One of the first things I noticed was the apparent enhancements to the backing tracks, stepped up from what’s heard on the record versions. My ears may have been deceiving me, but at least these tracks
were at the very least very well mixed at the venue. Given that these sonorities are the only sounds outside the guitars and drums, this pronouncement is critical. Given that success, they became the well-honed platform from which Tosin and Javier could both step forward with their more organic sound.

If you are one to subscribe to the notion that an album’s opening track is often or usually or at least one of the strongest tracks, then Animals As Leaders led a repeating onslaught of these openers, covering the first track from all four records.

The deliberate breaking-away from note-for-note solo replication at their shows is one of the coolest indicators that this stage of Tosin and the band’s sound is a changing one. As someone who has pored over their newest release ever since it came out, I immediately noticed his improvisation in Arithmophobia’s first solo, instead of matching the record. However the second solo, the more distorted one, he did however
re-execute perfectly.

Speaking of perfect execution, it’s worth pointing out that Matt Gartska is, at this point, so silly comfortable with the early material that his fills in odd-metered monsters like Tempting Time had me and several people next to me literally shaking our heads,confounded. His talent and its showcasing have already begun to affect

their compositions in ways that I elaborated on a bit in my review. The outro of Physical Education live now features very spare guitar accents under Matt’s thunderous unfurling, as did Inner Assassins though somewhat disappointingly stopping short of that beautiful final section on the record.

It’s also somewhat apparent that some of the worry about mistakes in the rhythmic changes or just mistakes at all are a thing of the past. I remember my first of three times seeing them on the Weightless tour at the fairly small venue then called Kingdom, supporting Between The Buried And Me who were the sole reason I had that ticket at that time. Navene was Animals’ drummer then, and aside from the total motionless amazement most found themselves in at Tosin’s incredibly dexterous technique, the feel of the show for me was more of an incredible bedroom project tried out onstage. To successful ends, I would add.

Considering that he was already asked to join the Generation Axe tour this year alongside well-known guitar gods such as Yngwie Malmsteen or Steve Vai and did, both Tosin’s and his band’s progression should be a

fascinating one. He’s not nearly as interesting in applying his increasingly-recognised virtuosity to the lightspeed pickwork primarily typifying players of those levels. Instead he seems to wish to utilise as many of these new fingerstyle, tapping and thumping approaches as fluidly and integrated as possible. And whether or not this focus would necessarily also lead to more intervallically melodic and thus more musical results doesn’t matter because they did.

What’s interesting about it now though is as they’re becoming more warm and more diverse with their sound(s), there are still very obviously metal-influenced structures and content to their approach. I think that this is a very deliberate step outside any genre impositions, but if I were to guess, I’d say their next effort would be in a seriously jazzy/fusion sort of direction, which is to say exactly the same way they came from The Joy Of Motion to The Madness of Many.

With each successive album, Tosin’s focus, and so also the band’s sound to a relative degree- has noticeably shed the shred in favour of less rigid grooves, more musicality and melodic content, and just more space overall, although not exactly at the expense of density, I might add. Although his lines have more space to them, the songs are still very tight in a cerebral and insular way. And although there are examples of newer songs that have “happier” sounding moments, even these less aggressive moments still have the intense focus that has been a part of their aesthetic since Day 1.

To me it seems that Tosin having already begun establishing himself as the next generation’s guitar hero at 33 would likely achieve some pretty stratospheric heights given the tenacity and diversity of his development thus far. And although plenty of seasoned guitar virtuosos end up relaxing and slowing their sound once they start getting older, I feel that Tosin is taking a surprisingly early turn off the fast lane, something I couldn’t respect more.

In a YouTube interview some weeks ago, he spoke of the Renaissance he thinks the guitar is experiencing nowadays. He seemed to speak of such a movement as if he weren’t the one leading it.