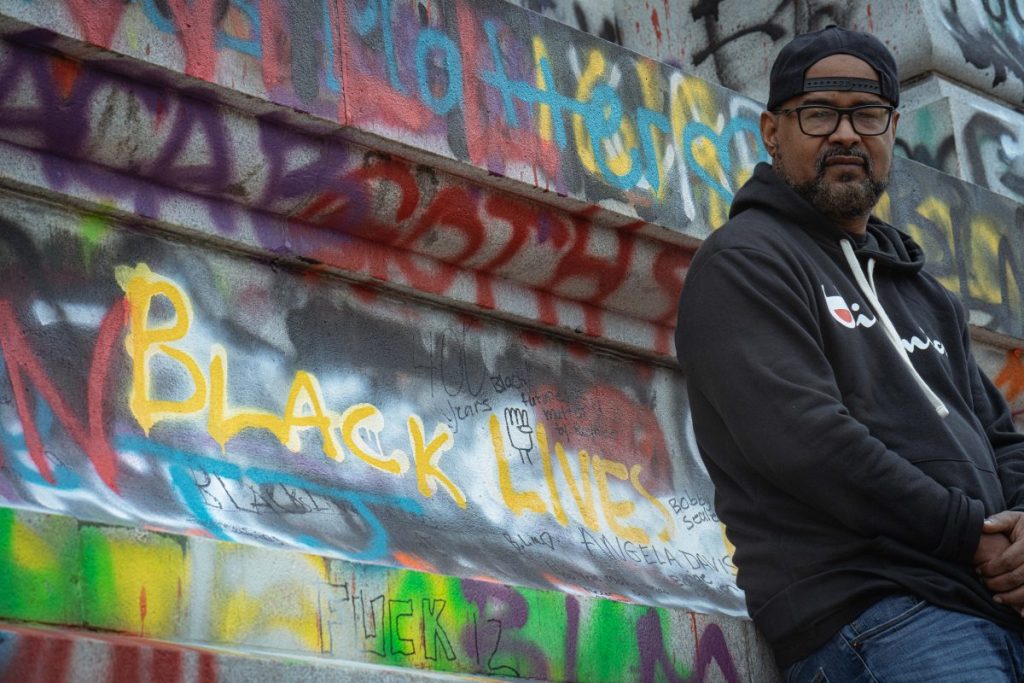 In the midst of big changes in the local landscape, RVA Mag caught up with Richmond hip hop legend (Mad) Skillz to talk monuments, music, and making real change in the Commonwealth.

Skillz has the wisdom of experience, having worked with everyone from The Roots and Nas to Jay-Z and Nicki Minaj. A veteran of the game, Skillz has not only presaged current events, but laid the foundation for generations of artists to come. During this time of protest, unrest, and political upheaval, who better to help navigate the many complex realities of life in the commonwealth?

RVA Mag caught up with Skillz and Richmond rapper Michael Millions one rainy day last week at the (soon to be removed) statue of Robert E. Lee to chat about the movement, Richmond, and how rap and hip hop has accelerated our consciousness.

RVA Mag: You’re a Richmond hero, rap legend, you have national prominence: With all of your experience, what’s this movement mean to you right now, where we at?

Skillz: I’m proud to see the city take a stand. Some of these objects have been here for as long as I can remember [points to the statue of Robert E. Lee]. For people to take a stand against systematic oppression and racism, I knew it was a bubble that was going to burst at some point — I’m just glad that I’m here to see it.

Michael Millions [to Skillz]: Prior to the civil unrest, have you ever been this close to this monument?

Skillz: No, not this close.

Michael Millions: Driving through the city or utilizing this roundabout, have you ever even intentionally looked up at this statue?

Skillz: I’ve been in Richmond since 1987 and I have never looked to the top of this monument. During the VCU days when I was living a block away, I never looked up going around this corner.

Michael Millions: And you’ve never steeped foot on this soil in this city?

Skillz: I have never stepped on this soil.

RVA Mag: When you guys saw this statue in its current form, what was the first thing that popped into your mind?

Michael Millions: When I think of structures going up, I look at structure and shapes, everything they laid down, the foundations — there is a lot of intention to raise this, this high. And on top of all this, there is this statue on top.

Everything returns to the earth. Even if they left it up in this form, the people have reclaimed the land. We like this now — it is definitely an art piece.

Skillz: I have talked to plenty of people from out of town who had to come down here and take photos, and let their children see it before they take it down.

RVA Mag: Skillz, coming up in the 90s, what’s it like to see this transitional moment, not just in Richmond but also in the US. Is Richmond playing a deeper role than most people think?

Skillz: The difference between the 90s and now is about moving around the city — we chose to ignore these [Confederate statues], because they were never speaking to us. We never saw ourselves. They have way more of these than we had any representation. Now, for this to be a space that the oppressed feels to have taken over and reclaimed, it feels good. I believe this generation can be the generation to push forward for real change, because it is different now. A lot of things that used to fly can’t fly anymore; not without question, revolt, or repercussions.

RVA Mag: Did you ever expect to see this in your lifetime?

Skillz: In Virginia, in the Commonwealth? No, never. Whatever this is going to be, it needs to represent all people, not just some people.

RVA Mag: What does this movement look like to you as a man of conscience, a creator? You have also been the artist-in-residence at University of Richmond. You sit at the nexus of all these things.

Skillz: You might feel as if there is no change you can make, but what I want to say is that you can make that change. People at my age, not all, but some, have become complacent. I’m proud of all the young people stepping forward to make change. Now, when these cops stand in front of the protest groups and they see these people standing in front of them, it’s not just black people; it’s also gay people, Latino people, trans people. The army of “you’re not going to oppress us” is way bigger than just Black people.

Sooner or later they’re going to have to realize that this is a whole new thing.

RVA Mag: As someone who has articulated the Black experience in the 90s through their music, does this movement feel different?

Skillz: Yes. This is at my front door. I came back from LA to buildings burning and buses burning on Broad St. I’ve never seen that shit in my life. To see that, I can’t even imagine these people living here and seeing this thinking, “this shit is really happening outside my window.” And that’s how change happens. You almost don’t believe it is right at your front door, but it is. It is uncomfortable and uneasy, but that is what change is.

RVA Mag: It seems like the boundaries of American culture have shifted quite rapidly in the past two weeks. The NFL, NASCAR, major corporations — even if its disingenuous, it’s still happening. What role has rap and hip hop culture played in pushing this national consciousness over the past 20 to 30 years?

Skillz: It has shown that it can’t be ignored. From day one people always thought it was a fad and it would fade away. No one saw this coming — that it would be a major global trillion-dollar business. Black culture is culture; this shit ain’t cool until we do it. And then when everyone else starts doing it, we stop and start doing something else. It is a transition, a cycle. These voices will be heard one way or another. This is the most popular music in the world — it is so prevalent in today’s society that you almost overlook it, because it is in everything.

RVA Mag: From a certain perspective, it is America’s number one cultural export.

Skillz: Without a doubt. I’ve been to places where they don’t even speak English and they know the words to 50 Cent, “In The Club” — some people have learned English through hip hop.

RVA Mag: Do you feel Virginia ever really took ownership of its rap and hip hop scene? Given the sheer number of national and international acts that have come out of Virginia, it has always seemed strange to not represent that the way New York, Atlanta, Los Angeles, and other places would have. Do you think Virginia has come full circle in terms of national rap and hip hop culture?

Skillz: No I don’t think we have. It takes perseverance, more soldiers, more cracks in the armor. When you look at some things that you never thought would happen, they have happened. So you can’t say that the history has to be absorbed and respected, because amazing things have happened here, and there are more amazing things to come.

RVA Mag: Michael, let me ask you something. Based on what Skillz said, what is the next step for Richmond rap and hip hop?

Michael Millions: More perseverance. Richmond is such a special place, our awareness in music is what makes artists from Richmond so special. If we could get in front of the curve, in terms of bringing that craftsmanship back to music. Look at where we live, there is not an artist here that is not impacted by this city. Where we live makes our writing and thoughts very special. I don’t think anything is going to stop us coming out of this area.

RVA Mag: Skillz, as the artist-in-residence at University of Richmond — given that the students which go to that school are quite privileged and it’s one of the most expensive schools in the US — what was your main takeaway from there?

Skillz: In the midst of being there and seeing the diverse students, our class was one of the most popular on campus — it was definitely something that took me to a place where I could acknowledge that this music [rap and hip hop] was the voice of America. I worked at VCU too, so I can’t say that I want to be exclusive to [University of] Richmond. I think it would be dope to teach all across the city. I would teach this class at all schools if I could, because I feel like everyone can absorb something from that. When they take my class on the first day, I ask, “Why did you take this class?” A lot of them come and think it is going to be an easy A, but it’s not; they have to do the work.

The big takeaway is that you never stop learning. You’re always going to be a student.

Great seeing you guys. Thanks for the lessons.