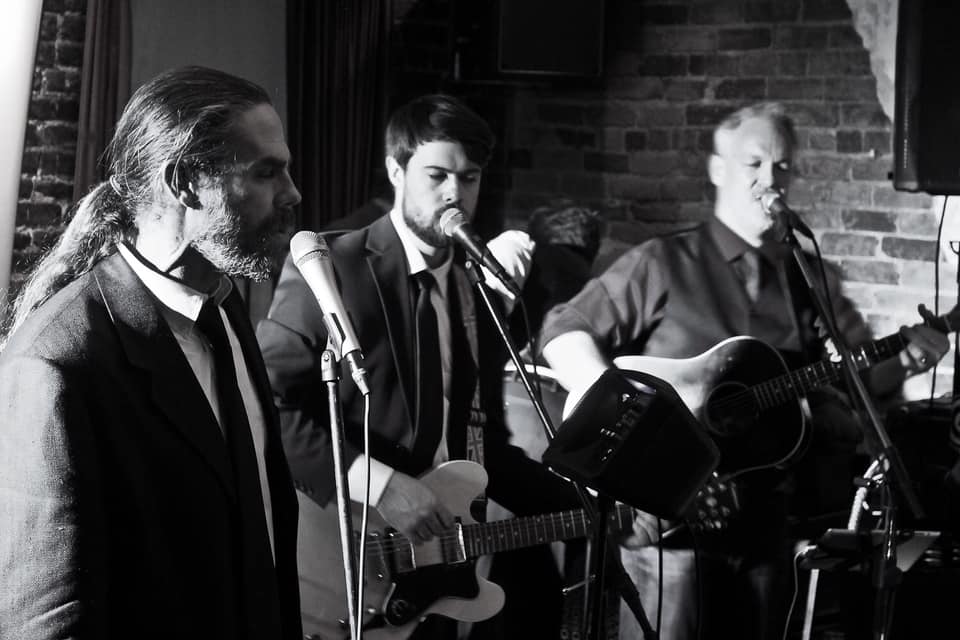 Music means a lot to Richmond’s Crain Brothers Band, but community, family, and fun are just as important.

Deep family roots, community, and having fun are what The Crain Brothers Band is all about. Their slogan, “good music, good people, great times,” pretty well sums up the experience of people who have seen them over the past ten years since they first began playing around Richmond. “If it ever stops being about that, it’s time to hang it up,” says Alex Crain, one of three Crain brothers who collectively front the band.

“Getting musicians to stick together isn’t always easy,” Alex adds. “Having close-knit brothers as the core of the band helps us to keep things going.”

The band is about making people happy through their music — and they do. People love their family vibe and vocal blend. At their concerts, the crowd is jumping the whole time.

Each brother plays an important role in keeping the band alive. Alex plays guitar, sings, and “attempts to keep the band organized,” he says. Jon, says Alex, is the “free-spirited singer with energy to spare,” while Alex describes keyboardist and singer Eric as “the even-keeled big brother.”

“Growing up, we couldn’t afford guitar lessons. We did love to sing though,” added Alex. “Way back before guitars came into the Crain home, it was all about singing.”

Alex says he was raised around music; his mother was a church pianist, and his father spoke and sang at churches. The Crain parents, Don and Susanne, would sing duets, and teach the brothers, Eric, Alex, Jon, and Josh — along with their sister Jamye — how to harmonize with them. The brothers and Jamye would sing at churches often. “I remember that I got to sing a solo once, but my sister was the star singer in those days,” says Alex. “She sounded just like Karen Carpenter.” Now, whenever she is in town, the brothers love to invite Jamye on stage to sing with them and reminisce about the long family car rides of their childhood, singing together in their station wagon.

“The first time I picked up a guitar with a real determination to play, I was probably about 14 years old,” says Alex. “My brother Eric had gotten this little acoustic guitar with terrible, high action, so that it would hurt your fingers to play it. Every now and then, at bedtime, my dad would pick up the guitar and pretend to play it — making up silly songs to get us to laugh. But the guitar mostly sat in the corner collecting dust.”

Then one day, Alex heard “Southern Cross” by Crosby, Stills, and Nash on the radio. “I just got it settled in my mind that I was going to learn to play and sing that song,” he says. “And finally, I did.”

Before there was ever a band, the Crain Brothers enjoyed playing music for fun. “I think it was after I began learning chords for ‘Southern Cross’ that Eric picked up the guitar, too,” says Alex. “He would’ve been up around 17 or 18 then. Later on, in his 30s, was when he taught himself how to play the keyboard.”

As for Jon Crain, he got started young. “Jon started picking up the guitar when he was about nine years old,” says Alex. “But before he could get a guitar, our dad bought him a harmonica and said he had to learn how to play that first. He’s turned out to be pretty good at both.”

The fourth Crain brother isn’t an official member of the band. However, he too plays music, and occasionally performs with his brothers. “Our youngest brother, Josh, is a great percussionist and singer, too,” says Alex. “We love it whenever he can join us.”

The three Crain brothers didn’t start with the goal of being a family band. Each of the brothers had played in different bands before beginning to play together. It was not until October of 2009 that the Crain Brothers Band was officially formed. “A neighborhood in Hanover wanted to have an Oktoberfest with a live band instead of a DJ,” Alex says. “The committee thought that we were already an active band. The reality was that we just had a demo CD of Jon singing a few songs with other musicians accompanying him.”

After playing at the Oktoberfest, word of the brothers’ talent spread, and they began to play at both private events and local venues such as Sine Irish Pub, Tobacco Company, and O’Banks, a since-closed Hanover pub. They were also featured on the main stage at the Virginia State Fair. At the Oktoberfest, the brothers played covers of classic rock: Led Zeppelin, the Beatles, Tom Petty, The Eagles, Pink Floyd, Rolling Stones, and other similar artists. As time went on, though, the band added a mix of classic country, 80s, 90s, and other popular hits to their repertoire.

“We are always trying to stretch ourselves, expand, and learn more,” Alex says. Current events can inspire new additions to the songbook; in particular, the recent death of Rush drummer Neil Peart has led the band to consider learning some Rush songs. “One of the drummers who plays with us, Wayne Purdy, who used to play with Chicago blues man Buddy Guy, was in a Rush tribute band. So, he’s excited about that,” Alex says. “Super technical music doesn’t always have great crowd appeal in our experience though. We’ve sometimes worked for weeks on a song that we thought was going to be amazing, but then the audience just wasn’t into it.”

In the end, it’s the brothers’ vocal talents that the audience seems to love the most. And the brothers are fine with that.“We like to make people happy, and we’re not overly concerned about impressing musicians,” Alex says. “In fact, we’ve kind of noticed that having elite musicians as a fanbase can sometimes be a negative in terms of maintaining crowd energy. We’re a vocal band – and we’re all about crowd appeal and creating fun times, not showing off in ways that most people don’t really care about.”

Alex, Eric, and Jon are all thankful for the great friends they’ve made over the years, some of whom are other musicians, while others are helping hands along the way. The band also brings their family together regularly. The Crain Brothers Band is a community and family-focused band with energy like no other.

“I think we all like the fact that playing gigs brings our family and friends together on a regular basis,” says Alex. “Eric’s sons — Taylor , Andrew, and Zachary — play with us when they can. And my 17-year-old son, Benjamin, appeared with us recently, with some original songs that he’s working towards releasing this year.”

Alex supports his son making music of his own, but the Crain Brothers Band has been hesitant about getting into original music themselves. “Original music can be a tough gig. I’d really love to see him succeed in that,” Alex says. “We’ve been kicking around the idea of introducing original songs. But I guess we’ll have to see. Right now, it’s about connecting with people and having fun.”

The Crain Brothers have had a lot of fun over the past decade. And they’ve also made a lot of important connections. “Some of them have even become part of our immediate band family,” Alex says. “Like Winky and Rere Chenault, who run our merchandise table and help with sound and a ton of other things. Our bassist, Frank Boehling, met us through a mutual friend, Larry Leadbetter, who just kept urging Frank, ‘You’ve got to see this band!’ Guitarist Paul Lusk calls himself a sideman for the band, since he always seems to have other projects going. But we’ve regarded him as part of our family for years.”

The Crain brothers have lived in Central Virginia area for decades. But after a decade of playing together as a band, it feels even more like home.  “This part of Virginia feels like a much closer-knit community to us since we’ve been playing,” says Alex. “It’s amazing how connected everybody is — we just don’t realize it until we get together over a common interest, like music.”

The band plays publicly in the Richmond area about once a month. You can find the Crain Brothers Band at Hardywood Brewery, Tang & Biscuit, JJ’s Grille, Atlas 42, or book a private event with them! Their next gig is a charity performance for Jacob’s Chance on February 22. For more info, go to jacobschance.org/fundraisers.

Isabella Boehling is from Richmond, VA. She is currently studying at Randolph-Macon College in Ashland, VA, majoring in English and minoring in Education in hopes of becoming a teacher. She is on the tennis team at R-MC and enjoys spending time with friends.