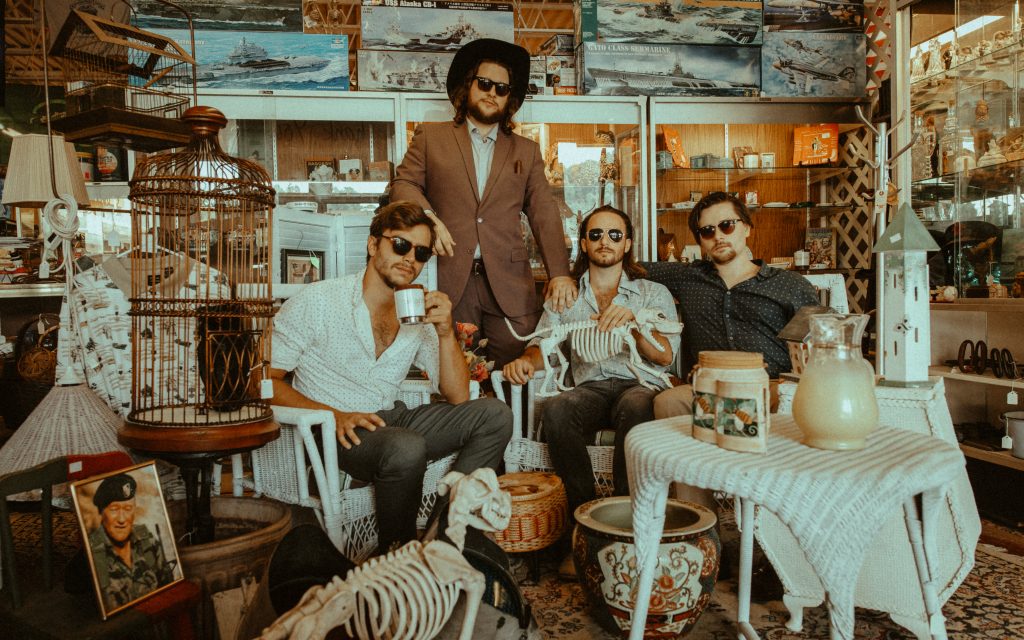 You may not be familiar with the name Holy Roller or even know what it is, but you will definitely recognize some of the faces in this four-piece band that has recently made its debut, with an album slated to drop this fall.

Holy Roller is a new project from the guys of former Southern rock band Big Mama Shakes, who performed their last show under the name back in the spring. And now, armed with a new member, new material, and a new name and sound, the band is eager to show fans, old and new, what they’ve been working on.

Since forming in 2013, Big Mama Shakes entertained Richmond crowds and beyond with their raw, energetic shows and southern charm. Since releasing their debut album, “As She Does” in 2015, the group built up a solid following with a monthly residency at The Camel, touring up and down the east coast and midwest, and playing alongside major names like Passion Pit, Incubus, and Nathaniel Rateliff.

While finding success musically, they weren’t without their shakeups. They went through a few lineup changes back in 2015, and again when drummer Chandler Matkins left to pursue a job with a theater company in Kentucky at the beginning of this year. Lady Empire’s Isaac Friend sat on drums for a bit, but recently departed the band and was replaced by Ryan Davis, who plays drums for the Richmond Ballet. In addition to that, their former guitar player, Gabe Taylor, also left to pursue other ventures.

“We lucked out that all this stuff happened immediately after we were done recording,” said vocalist Brady Heck. Between that, the gradual shift in their sound, and some confusion with blues-rock band Alabama Shakes, Heck said it was time for a transformation.

“At the end of the day, we had so much changeup with members and the music has changed now, it seemed like the appropriate time to move forward with something new,” he said. “The album was recorded with the intention of being Holy Roller and being a different band and being a different sound.”

Now with a firm lineup of Heck on vocals/guitar, Davis on drums, founding member Peter Cason on bass, and Bryce Doyle on keys, Holy Roller was ready to start carving out a name for themselves. For the band’s debut album, the group headed into Montrose Recording in late March, working with Adrian Olsen and Alex Spalding to churn out material they’d been writing. And while they were only there a week, Heck said recording at the local studio was one for the books.

“We were there pulling 10 hour days and it became a family-oriented process and everybody was invested,” he said. “They’ve got a little house attachment to the studio and by the end of the week, we were cooking dinner together and eating like a family. We’ve recorded a lot of places but I’ve never had an experience like that.”

Produced by Super Doppler guitarist, the yet to be named album is a shift from the southern rock fans are used to from Big Mama Shakes. While stressing not to label the new project as country music, Heck compares it to Ryan Adams and said the forthcoming release centers around a theme of returning to your roots.

“I found a deep-rooted love fairly recently for old outlaw country music,” Heck said. “That was something I was brought up around my whole life, my mom is a musician that has always played in country bands.”

While not initially a fan of the genre growing up, Heck said after he fell on some hard times, it was an old Willie Nelson record that picked him back up.

“All of a sudden [it] made a whole lot of sense and from there, the songwriting changed and everybody got on board,” he said. “The music went from being the big show that Big Mama Shakes kind of was, to being more song-centered, focusing more on the story.”

And for the first time, Holy Roller wrote most of the songs together as a band. In the past for Big Mama Shakes, Heck had been the primary songwriter.

“It’s a cool thing to see somebody that never really experimented with writing music blossom as a songwriter over the course of a couple weeks,” he said. “It’s not this ringleader circus anymore, it’s more of a well-oiled machine and everybody’s got an idea of the way it’s supposed to sound because they had a part in putting it together.”

As far as the name, Heck credits that to Cason.

“It was kind of a joke,” he said. “I come from a super religious upbringing I was brought up on a house divided and both were super religious. Regardless of what we follow now, it’s sort of a harkening back to where we come from and the same could be said for the music we’re doing now.”

But not to fret longtime BMS fans, there will be a few songs for you on the new release.

“There’s going to be a little bit of crossover that if you were here, in the beginning, you will be able to see,” Heck said. And while they aren’t giving away any teasers to the new music, from what RVA Mag has heard, the new sound is going to be something that longtime fans and new listeners can dig.

For now, Heck said Holy Roller is working on getting their name out there a little more before setting a date for an album release party in the fall. In the meantime, you can catch Holy Roller at Hardywood’s Goochland location this Sat., Sept. 1, at the Tuckahoe Creek Americana Festival alongside Dharma Bombs, Hackensaw Boys, The Tillers, Dogwood Tales, The Judy Chops, VILLAGES, Alexa Rose, Mackenzie Roark, and Eliza Jane.