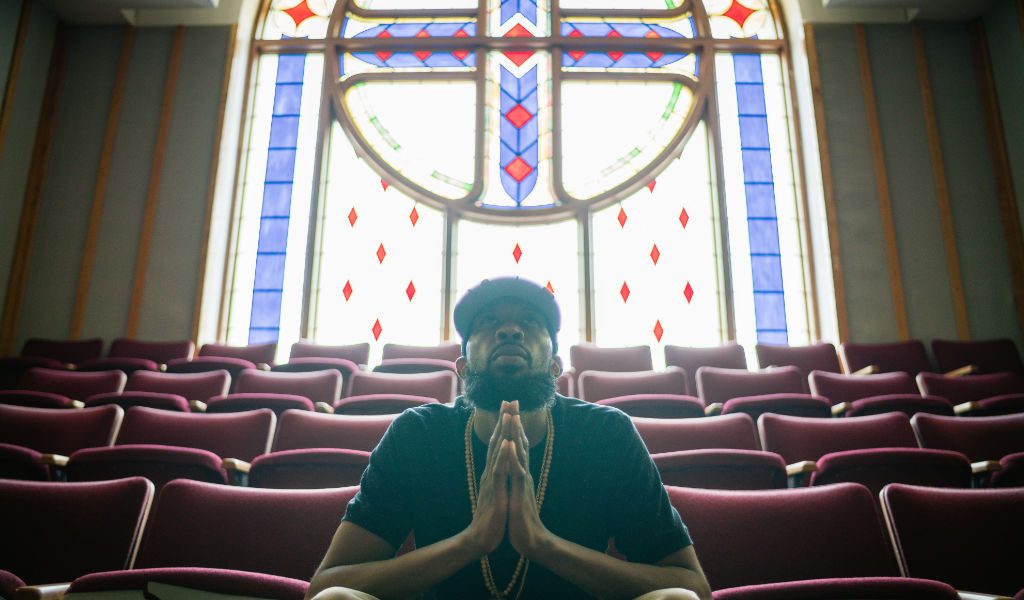 Hip-hop is more than the cliché of “money, hoes, and clothes.” Students at Virginia Union University are peeling back the layers of the 45-year-old art form, and discovering that faith and religion are an important part of the music.

The collegiate focus is only the latest transformation in how American culture views hip-hop. From block parties in New York City to worldwide phenomenon, to the halls of academia, hip-hop has come a long way. Although Howard University offered the first hip-hop class in 1991, it’s gone from a niche topic to something taught even at Ivy League schools like Harvard University, where Nas and 9th Wonder hold fellowships.

The article originally appeared in RVA #33 Summer 2018, you can check out the issue here, or pick it up around Richmond now.

In our region, classes range from 9th Wonder’s hip-hop class at North Carolina Central University to a course co-taught by RVA’s Mad Skillz at the University of Richmond. While 9th Wonder and Mad Skillz focus on the music — Skillz even brought in Public Enemy producer Hank Shocklee this spring — Virginia Union University is all about the faith.

Rapper Ricky Parker had the idea in 2016 while doing research on hip hop courses from North Carolina to New York City. “I was just really trying to figure out, what am I going to do at Union? You know, what is Union’s story?” he said. Ultimately, it was the theology department and religious foundation of Union, a Baptist-affiliated school, that he thought a hip-hop course could highlight.

Union is one of many Historically Black Colleges and Universities, schools founded with Christian affiliations where legendary rappers like DJ Red Alert and Das EFX, along with present-day stars like DJ Envy or Wale, earned their degrees. Parker worked with Dr. Carleitta Paige-Anderson, Director of the Center for Undergraduate Research, to develop curriculum for students learning about the intersections of faith and hip hop.

“It’s like almost two cultures, that exist at this school. You have an undergraduate HBCU culture,” Parker said, describing this first group as being overwhelmingly into hip hop and contemporary rap. About the second group, he said, “Then you have the faith component… the mix of people that are looking to start churches, missionaries, that come here to get an education, too.” The class serves as a way to integrate the two interests across the campus, bringing secular students and ordination-track theology students together.

One of the marquee events for the independent hip hop studies program took place last spring when Gene Thornton, the rapper known as No Malice of the legendary hip hop duo The Clipse, came to campus as a guest lecturer. On the phone, Thornton told me that came about through Parker. “He put it together and, I’m trying to think of how that actually fell in my lap, but I knew it was home, and it was about faith and hip hop in Virginia Union,” he said.

You must be born again. Who gave you your talent, gave you hip hop?

“They had asked me about what I thought about faith in hip-hop,” Thornton remembered, describing it as “a great opportunity.” The experience was a good one, he said, adding, “I got a chance to come and tell my truth.”

Another event pulled in Greg Carden II, a Richmond-based rapper known as Radio B. He spoke about his latest album, Jesus Never Wore A Suit, sharing the deeper meanings behind the work. “It’s an escape from forced doctrine,” he said, explaining that culture ties the idea of being a grown man to wearing expensive professional clothing. “My response to that was, you know, Jesus never wore a suit.”

It’s about more than clothing, though. “That can be universal,” he said. “The idea is that the perception that we apply to certain images, especially something like a suit, that there’s an advanced level of professionalism, ethics, intelligence, that doesn’t necessarily apply to what someone has on. It’s more about overall perceptions that we put up to cover up our insecurities and to put our best image forward.”

Hip hop has always had a message to the music, and each of the rappers I spoke with had different words to impart to the students at Virginia Union. Radio B wanted to encourage them to think about more than a safe career path. “Being a creative person that stepped out independently from my job to chase my passions, I think that’s important for students to see. A lot of students get into school … but their goals are based around, you know, something that they were told they should do.”

Other students, he said, are stuck, not getting anywhere, and his message was slightly different for them. “Everyone has something that you’re drawn to,” he said. “Maybe not a passion, because they haven’t put enough time into it or given it enough interest or fed it enough. But I felt like it was important for me to be able to speak to them from that position, to give them some perspective on approaching their dreams.”

No Malice had a more straightforward message, centered on his faith in a creator-figure. “You must be born again,” he said. “Who gave you your talent, gave you hip hop? Who gave you communication skills? You know, everything you do. You talk about. You rap about. Or creative gifts and talent — where does that come from? We tend to have this thing where we worship the creation more than the creator. You know, you can’t just start with the creation, and start rapping. You have to start with the creator, first and foremost.”

Talking about faith in hip hop brings up childhood memories for most of us, too. Parker and Radio B both said that rap and hip hop came into conflict with their family faiths.

“My mom was a Sunday school teacher, and my older cousin is a pastor,” Radio B said. “I spent a lot of time in church, between those two influences.” Growing up in “the golden era of hip hop” was his second major influence, he said, which led to a “balancing act between the two.”

My response to that was, you know, Jesus never wore a suit.

Radio B managed to find a way to keep his faith and his music, and even integrate them. He said, “I feel like Jesus Never Wore a Suit, in a way, is very much a gospel album — even though it’s not a gospel album, obviously. You know, with some of the language.”

Thornton, too, saw his faith as part of his artistic life. “They do go hand in hand … I believe personally that God is the author and the finisher of my faith, and that the gifts and the talents that he gave me are to glorify him,” he said. “You know, I’ve been a fool for far lesser things, I’ve said that in one of my verses, so I have no problem letting everybody, the entire world, know that Jesus Christ is the Son of God.”

Parker brought up Islam, too, which he described as just as close to hip hop, pointing to Nation of Islam founder Louis Farrakhan’s outreach to rap artists. He described this past semester at Union as the first step he’s taken in exploring faith and hip hop, adding, “I think there are a lot more artists that are open about talking their faith, whether it be Christianity or Islam.”

Hip hop is a microcosm of the entire planet; you can speak on any subject and there are still new things being discovered. The power of the culture is more than just mainstream pop music. There is a balance that is needed, and places like Virginia Union are helping open doors for an important dialogue between the church and hip hop artists. As Thornton said, “It’s a conversation you can’t avoid.”