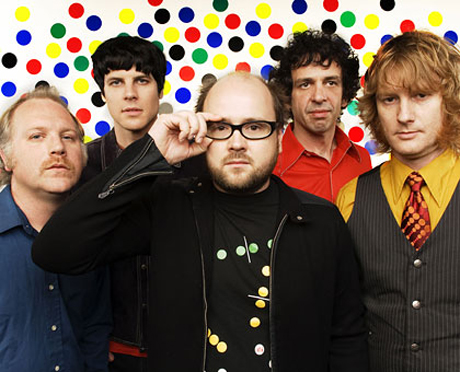 A station like WRIR doesn’t come around often. Just ask Breakfast Blend’s DJ Enzo Adimari. He lives in Alexandria, VA but his schedule works around his ability to be in Richmond on Monday Mornings to do his Breakfast Blend without a hitch. After two and a half years on the air, he must be doing something right.

A station like WRIR doesn’t come around often. Just ask Breakfast Blend’s DJ Enzo Adimari. He lives in Alexandria, VA but his schedule works around his ability to be in Richmond on Monday Mornings to do his Breakfast Blend without a hitch. After two and a half years on the air, he must be doing something right.

His format leans towards the underground indie-pop and rock from the eighties, nineties, and present. If you accused Adimari of leaning more towards the pop spectrum, he wouldn’t argue with you. He unabashedly loves sunshiny hooks that exist in the world of power-pop.

So as a naive twelve year old, I thought to myself, “I know, I’ll become a DJ and then I’ll play it!”

I started DJing in clubs in the D.C area in ’82 when I was sixteen (everything from hole in the wall punk clubs to European style techno clubs). That sidetracked me from getting into radio till I decided to move down to Richmond in ’92 to do so. I started at Q94 in ’94, went on to 106.5 “The Buzz” in ’95 and when that got bought out I went on to B103. Sadly by the time I did get into radio it had morphed into the homogenous pre-programmed wasteland that it has now become.

I don’t regret my time in commercial radio. I learned a lot about the medium and proper broadcasting techniques and such. But by around ’96 not only was it all pre-programmed, it was all downloaded onto a computer and the computer ran itself so you’re just essentially babysitting a computer. You’re not even a DJ at that point, just a glorified announcer or a “personality” if you want to get fancy. Calling a commercial radio DJ “a DJ” is akin to calling the guy who works the fry machine at McDonalds a “chef”.

I never wanted to be a “personality,” I just wanted to share my passion for music and turn people on to fresh sounds. Commercial radio isn’t about music. It’s about “lifestyle.” My Program Director at B103 kept wanting me to talk about last nights Friends episode and such. In fact, the General Manager of Cox Communications in Richmond, Steve Mcall, who at the time (’98) was overseeing B103, Y101, K95, and “The Planet” was quoted in an interview with either Style Magazine or Richmond Times Dispatch (I don’t remember which, it might have even been RVA Magazine) as saying,” Radio is essentially just back round noise.”

That’s when I said, “Check please” and left commercial radio in 2001.

In the fall of 2006, I happen to be walking down Broad Street and literally dropped my keys in front of 1621 Broad Street. I bent down to pick them up and happened to look up at the door and saw a piece of paper on the door that said WRIR Richmond Independent Radio. It was like finding The Holy Grail! I tried to go in but the door was locked. I pulled out my cell phone and called the number that was on the piece of paper and found out who I had to talk to in order to get a show on the air. At that time it was “Tiny”, so I called her and asked her what I had to do to get a show on the air. She asked me if I had any radio experience. I told her the experience I had. She said, “Oh, so you’ve done “real” radio?” I said, “Well to tell you the truth, what you guys are doing is REAL radio!”

So it took me thirty years to finally do radio the way I always wanted to do it since I was twelve!

In a nutshell: Independent radio is REAL! Commercial radio is not. The people involved in independent radio have a passion for music. My program director at B103’s all time favorite band was Huey Lewis & The News (nothing against Huey Lewis, if that’s who you like then that’s who you like, but you clearly don’t have a “passion” for music. Having a passion for music requires that you explore a bit. It’s like saying you have a passion for food and claiming your favorite food is Mac & cheese.)

I especially like listening to the DJS at WRIR because they are REAL people and not “professional DJS”. These are REAL personalities as opposed to the manufactured ones of commercial radio. I like the fact that we make mistakes. That’s what makes it real and fresh and yes, even raw. It’s someone talking TO you as opposed to AT you. I think that’s so much more enjoyable to listen to than a “polished professional DJ”.

For more information about Enzo Adimari’s installment of the Breakfast Blend, please visit WRIR for playlists from current and past programs. You can also check out his podcast HERE.