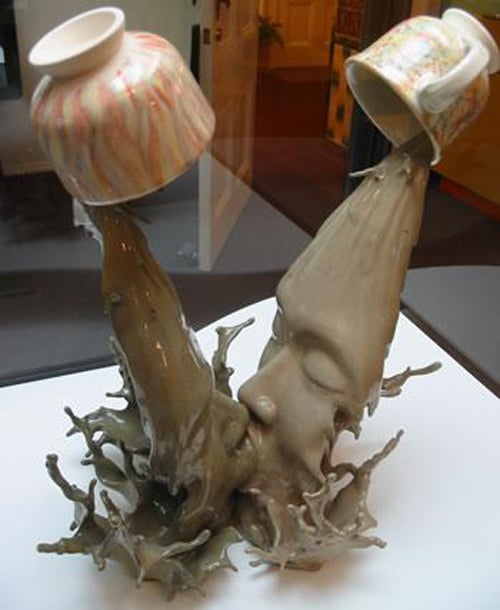 If George Reuther could name his Breakfast Blend program on WRIR, he would call it Sammy. Reuther explores music of the twentieth century.

If George Reuther could name his Breakfast Blend program on WRIR, he would call it Sammy. Reuther explores music of the twentieth century. As broad as that may sound, he searches through and discovers the sounds of this century with an ease and understanding that is active throughout each show. The results may surprise and enlighten you to a period of music you thought you knew everything about.

My first introduction to Reuther was when he hosted the All-Nighter program after my show Commonwealth of Notions. At the exhausting hour of 3am, I was ready to call it a night and I would always find myself leaving the sound booth with a grin after each change over. His plethora of sound effects and comedy clips would always entertain and give added personality to the sounds awaiting his late night audience. When he moved from the All-Nighter to the Breakfast Blend, I was excited to know that his audience would only expand. Also, that a much larger audience would hear his playlists bound in the history of twentieth century music.

Shannon Cleary: What prompted you to want to participate in radio programming? Were there particular memories you associate with music and radio that instilled a desire within you to want to be a DJ?

George Reuther: When I was a kid and we’d go to Grandma’s house. The Parents, Aunts and Uncles would wait until all the Nieces, Nephews and Cousins were out playing and then they’d go down to the basement. They’d drink beer and Grandma would play all the old 78s that had been saved over the years. I’d sneak down and listen to them laugh and sing all the “crazy” old music.

My Aunt Gerri, about 6 years older than me, would take me upstairs to listen to her Chuck Berry, Lonnie Mack and Little Richard records. There was a funny band on the Tollie Records label that I liked called the Beatles. This was probably “62 or ’63.

One day in Feb. 1964 (one of the coolest days of my life) I had just completed work on my spaceship made from a refrigerator box AND a washer and dryer box my neighbors had put out. I had a periscope (cardboard tube, two mirrors) so I could spy on people, an escape hatch and a transistor radio and the Beatles were landing in New York. I listened to Murray the K and 77 WABeatleC all day, ate jelly sandwiches and became a confirmed Beatlemaniac in the safety of my ship.

Somewhere around that time my parents gave me my first record player and Meet The Beatles, my first album. I’d put the record player in my bedroom window and play that and some of the records my aunt gave me for the kids in the neighborhood who would sing or dance and act crazy and run around. This was my first experience with jockeying discs.

We lived outside of New York in those days so we got some great radio. I remember listening to Bob and Ray before school on WNEW AM and then Clavin and Finch, two nutty A.M. jocks and William B. Williams who would play a classy mix of stuff everyday. When I got home it was Cousin Brucie on WABC and toward the end of the decade I started listening to WNEW-FM and then discovered WFMU in East Orange. Most of what I do now harkens back to that style or sensibility. Those guys were pretty good.

Is WRIR your first introduction to jockeying records on the radio?

In the mid seventies you needed to have a third class radio broadcasting license to get on the air and you had to take a fairly technical test to get it. I went into Manhattan one day, took the test and passed it and started training on WFMU. I can’t remember if I had a show for a short time or if I filled in for people. I do remember that everything was pretty smoky in those days and it was often hard to see. A short time later I moved to Williamsburg and got a show on WCWM at William and Mary and did that for about four or five years. I hadn’t been on air for thirty years until I started at WRIR.

You use a great deal of samples and clips? What are some of your favorites and where did this fascination with incorporating those effects into your show develop?

I want my shows to be entertainment with a capital N. I use a lot of various clips and sound effects because I like them. They’re unexpected and often funny. Radio is sound. Radio can be a theater of the mind. That’s what I got from radio as a kid, that’s what I want to give back.

For more information about George Reuther’s Breakfast Blend on WRIR 97.3FM, please visit this link and look for his installments of the program http://wrir.org/x/modules/news/index.php?storytopic=64