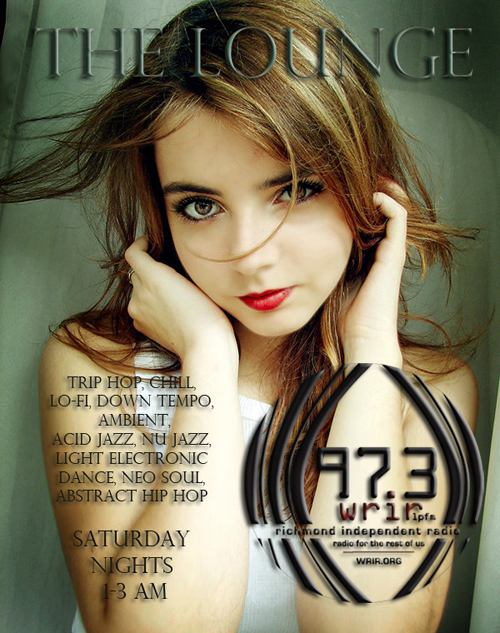 It’s Saturday night and you’re on your way home or to some late night diner or just to keep the night alive for a few more hours. While en route, you might want to tune into WRIR to hear The Lounge.

It’s Saturday night and you’re on your way home or to some late night diner or just to keep the night alive for a few more hours. While en route, you might want to tune into WRIR to hear The Lounge. To keep the spirit of the evening going, DJ Jason Matty plays the best of Trip Hop, Nu Jazz, Acid Jazz, Breakbeat, Ambient and many other genres that find their homes within the walls of the club scene.

With a true love of the genre, Matty informs his listeners about the current state of music in the club scene as well as artists that call Richmond or surrounding cities their home. On the way home, let The Lounge play as the soundtrack to the best Saturday nights.

Shannon Cleary: What is the name of your program and what genre do you focus on?

The name of the show is The Lounge, which airs every Sunday morning from 1-3AM. It focuses on artist that fall under Trip Hop, Down-temp, Breakbeat, Nu Jazz, Acid Jazz, Ambient and Abstract Hip-hop. Added to the show is spoken word poetry every 1st and 3rd of the month from local artist that blends well with most artist played.

What prompted you to want to participate in radio programming? Were there particular memories you associate with music and radio that instilled a desire within you to want to be a DJ?

I work full time as a Network Administrator and have a HAM license from my time in the military. I’ve always enjoyed all genres of communication and WRIR offered an opportunity to add to my portfolio.

I’ve always been around music from my first air organ and clarinet lessons from childhood, to my brothers and sister playing various instruments also. I use to cut and splice my cassette tapes so I could have various songs that would play for a few hours

How long have you been doing a program at WRIR? Has it always been at the same time slot? If you have had shows on at different times, how was that experience and did you maintain a similar format for your respective programs?

I have a year coming up with the show and almost 2 years being involved with the station. The time slot has always been the same as the genres almost fall into the same category as the dance shows before me. I love the time slot as it doesn’t interfere with my full time work.

With the popularity and advent of podcasting and Internet broadcasts of radio stations, how do you think this changes the medium? What advantages and disadvantages are there to this change in technology?

Where did your interest in the genre emerge? It feels fitting to have a program that focuses on club music aired late on Saturday evenings, are there any disadvantages to having a show that airs that late?

My interest evolved from living in California and being a bouncer in a few San Diego clubs. I was exposed to all types of music and people which in turn I visited other clubs. The laid back club/lounges really hit a nerve with me for the music that was played.

The late Saturday time slot is so perfect for this show. Again because it blends with the shows before me (electronic dance, drum and bass, techno) I can close out the night as people head home from the bars and clubs.

For someone like myself, the club scene is a facet of the Richmond musical community I’m not all too familiar with. With your program, does any of it focus on DJS or artists that may be coming to the area within the future and an idea of where live club performances take place? Also, is there a large community of artists that embrace and contribute to this style of music in the city of RIchmond (at least in your opinion)?

Oh yes. I focus on many artists that I play. Especially ones that are somewhat local like Thievery Corporation who are from the DC area. I keep a close eye on them in case they should ever come to Richmond. I just recently did a phone interview with Katie Melua who was just finishing up her solo tour in the U.S.

I’ve been told the trip hop scene sort of fizzled because many DJ’s played the same music from artist that were hot in the 90’s like Morcheeba and Massive Attack. I see this as being a problem as most do not hear the new music, as it’s even better than back then. Some focus on the hits of the past and though people love it don’t want to hear it again and again. So no I don’t see or hear about a large community or visited any clubs that cater to trip hop or chill. I made a few attempts at a few clubs they play but have been denied.

For more information about The Lounge, please visit http://wrir.org/x/modules/news/index.php?storytopic=169