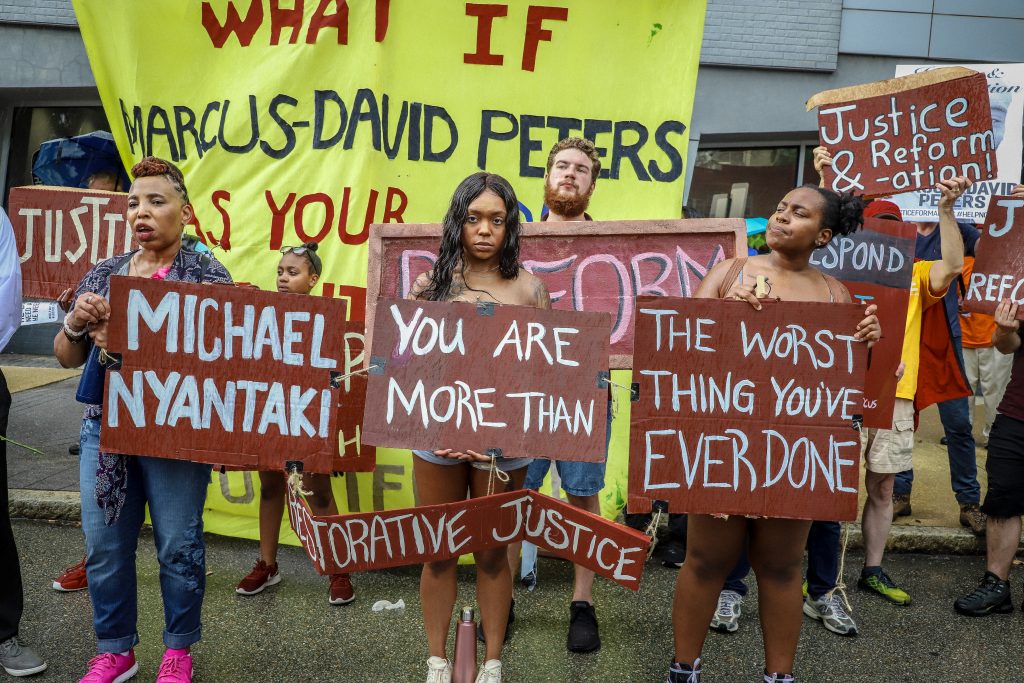 “Help, not death.” That was the chant that permeated today’s march that ended at the Richmond Police Department (RPD) headquarters, where hundreds of people demanded justice and reformation for Marcus Peters – an unarmed black man in mental distress who was shot and killed by a Richmond police officer on May 14.

“We are here in honor of Marcus-David Peters and other folks who have fallen victim and died at the hands of state-sanctioned violence,” said Jasmine Leeward, a New Virginia Majority representative who was one of the march organizers. “We are trying to band together as a community to show that Marcus’ life mattered, and other victims of state-sanctioned violence, their lives mattered, and to call for justice, accountability, and reformation.” She also acknowledged that there needs to be more clarity and compassion and “less violence” when it comes to people who are in a mental health crisis. 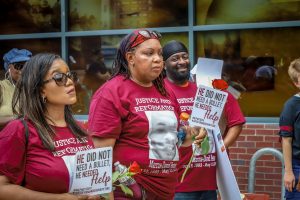 Throughout the march, there was a constant, but impassioned reprise from those who attended: That Peters needed “help, not death”. On the day that Peters was killed, he was having an unidentified episode of mental distress – something which is far too common in the US – especially as police come into contact with people who are having these episodes. According to Chief Alfred Durham in a press conference last week, officers only receive 40 hours of training on how to handle issues surrounding mental health.

Nonetheless, Peters was the 425th person to be fatally shot by a law enforcement officer this year, according to The Washington Post’s Fatal Force database.

Peters’ aunt, Taisha Peters, a mental health worker said that it is crucial for things to be handled differently, especially when it comes to the treatment of those who are mentally ill. “That’s primarily why I’m here, to support reformation for not just my nephew who lost his life, but others who may happen to also. [The RPD is] ill-equipped. They don’t have proper training, they’ve admitted that themselves on the record…That’s no excuse for what they did.”

The march began at VCU’s Siegel Center at 1 pm, before departing on the mile-long trek to the RPD headquarters on Grace Street. For the family and friends of Peters, the march retraced the steps which ultimately culminated in a life cut short; beginning at the place where Peters graduated with honors, past the Jefferson where he worked part-time, eventually ending at RPD headquarters.

“We out here to ensure that justice is served for Marcus David-Peters. Marcus, as has been echoed by his sister Princess many times, deserved to have the opportunity to be helped and should not have been killed in the process,” said marcher Antonio Redd, wearing a burgundy shirt with Peters’ face emblazoned on the front. The march organizers asked attendees to wear burgundy, Peters’ favorite color. “For other people experiencing a mental health crisis, we want to ensure that they receive the proper help that they need in order to survive, opposed to being killed in the process.”

And the crowd that gathered in front of the Siegel Center was flooded with burgundy, along with a sea of signs clamoring for justice and reformation. A giant yellow banner was carried throughout the afternoon asking, “What if Marcus Peters was your son, would his death still be justifiable?”

A cabal of different organizations and individuals joined today’s march, including Democratic Socialists of America, Industrial Workers of the World, Iraq veterans, along with members of various black churches, people committed to social justice, and those who simply thought the death of Peters was an abuse of police power all rallied to support Peters’ family.

Ozzie, an Iraq veteran who chose to only give his first name, said the Richmond Police Department’s actions are out of control. “In the military, we show a lot more restraint. In that situation, we could have detained that person. The police didn’t show the same level of restraint. I think it’s the mindset of a lot of police to escalate the situation instead of de-escalating them.”

“We are not here by coincidence,” said Keel. “We are here to affirm the dignity of Marcus’ life, the value of his life, the force of his life. We are here to say to this country, to this state, to this city, the police department that we must end the murder and dehumanization of black and brown people.”

VCU community organizers Khudai Tanveer and Taylor Davis also confronted the silence from the university on the death of Peters with an open letter detailing demands to the university and holding the school accountable for their lack of response on one of their alum. “We are allowing for 18 days from the initial receipt of this letter for the release of the stance critical on the use of force. We are generously selecting 18 days when it only took 18 seconds to make a decision that ultimately ended the life of Marcus-David Peters,” said Tanveer.

Next up was Harris, a pastor, who delivered an impassioned speech referring to the police as the new slave master. “None of us are free until all of us are free,” he told the contemplative crowd. “The former capital of the Confederacy has a new day coming.”

As the march snaked through the city on the way to the RPD, it included an unannounced stop at the Jefferson Hotel where march goers drowned the hotel in chants, shouting, “Shame on you, Jefferson,” in reference to the hotel not reaching out to Peters’ family during the incident. Despite this and the muggy 80-degree heat, the crowd rarely slowed, ignited with an energy and mission that pushed well beyond the simple march, making it clear that this is more than just a political statement.

Eventually arriving at RPD headquarters just as it began to rain, more speakers took to the podium right at the front entrance to the main building. No one from the police made an appearance or spoke to the marchers and Durham’s absence was noted by some of the marchers – some saying that it felt like an admittance of guilt.

Princess Blanding, the sister of Peters, read six demands, among them a call for RPD to publicly release what their crisis intervention training looks like so it can be thoroughly assessed for effectiveness. She also called for the creation of a “Marcus Alert,” a way for the community to “call on mental health professionals to respond when community members are clearly in crisis,” as opposed to immediately deferring to the police, which can escalate the encounter.

She ended the list of demands on the now familiar phrase, “Again, Marcus needed help, not death.”

On the heels of RPD’s reported excessive force against autistic Chesterfield teen McKhyl Dickerson the week before, reformation is needed now more than ever. The 2017 Police Violence Report shows that while black people are more likely to be unarmed, and less likely to be threatening, they are more likely to be killed by the police. This was a theme in today’s march as the names of black people killed by the police were never far away; names like Michael Brown, Eric Garner, Tamir Rice, Sandra Bland, and now Marcus Peters. 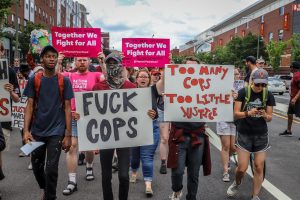 Today’s march for justice and reformation for Marcus Peters was also a response to the systematic and institutionalized mistreatment, violence, and over-incarceration against minorities in the US by police. In 2018, questions over accountability and transparency remain more critical than ever, more so when connected to ongoing challenges in how police deal with those who appear to be having a mental health crisis. Instead of vilifying those that are experiencing such an episode, the city needs to look for better mechanisms to help those in need. This is the only way this city will be able to move forward from this incident.

Some of the other photos from today’s march can be found below:

If you still have an opinion about the cola wars of the 80s, you might find a kindred spirit in this week's Missed Connections. Times have... READ MORE

Welcome to another week of Missed Connections, where between the pandemic and the cold crappy weather, it seems that none of us ever have... READ MORE

If you still have an opinion about the cola wars of the 80s, you might find a kindred spirit in this week's Missed Connections. Times have... READ MORE

Welcome to another week of Missed Connections, where between the pandemic and the cold crappy weather, it seems that none of us ever have... READ MORE