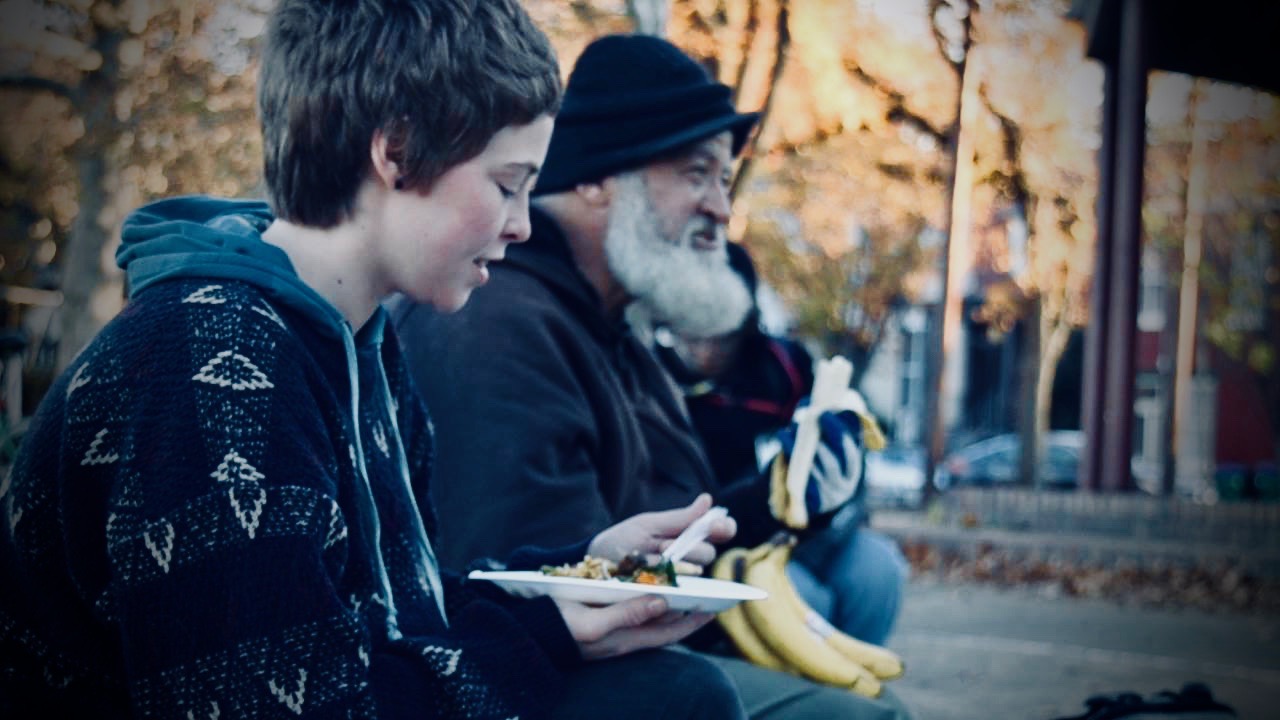 An Oasis In Richmond’s Food Desert: Food Not Bombs

When temperatures dropped to historic lows this year, some city residents found themselves camping out in the municipal Public Safety Building at 505 N. 9th St. The overflow shelter is a last resort for some, but for people without ID, it’s the only place they can stay.

Others, like the members of Food Not Bombs, came out to serve hot food, warm beverages, and extra clothing and blankets. The all-volunteer organization is the local chapter of a decentralized worldwide movement that serves and prepares food for others, founded on May 24, 1980, after a protest against a nuclear power plant.

Some 100 Richmonders lineup for doors that open at 7 PM on any day between Oct. 1 and April 15 when overnight temperatures are projected to drop below 40 degrees.

Thomas, a core member who didn’t want to use his last name, described it as “solidarity, not charity.”

“A lot of us have been in the same situation. These are people who just didn’t have a support system,” he said, listing off some reasons for homelessness. Mental health issues, traumatic brain injuries, substance addiction, sometimes just bad luck.

He’s known some individuals and their stories for almost as long as he’s lived in Richmond. “These are my friends,” he said, talking about biking around town and giving out water or sharing food with people he’s gotten to know.

Thomas has had experiences with local authorities and aid groups that make him critical of mainstream avenues of support. “Homeless people get a uniform, khaki pants, a backpack, and a t-shirt with a random logo. I tend to wear the same stuff, and I just see how people treat me when they think I’m homeless.”

He described being treated like a child by church volunteers but has had even worse experiences with law enforcement and security. He’s skeptical about government in general and points to the temporary closure of Monroe Park in 2016, where they’ve served food since 1993, as an example of government making life more difficult for the homeless. 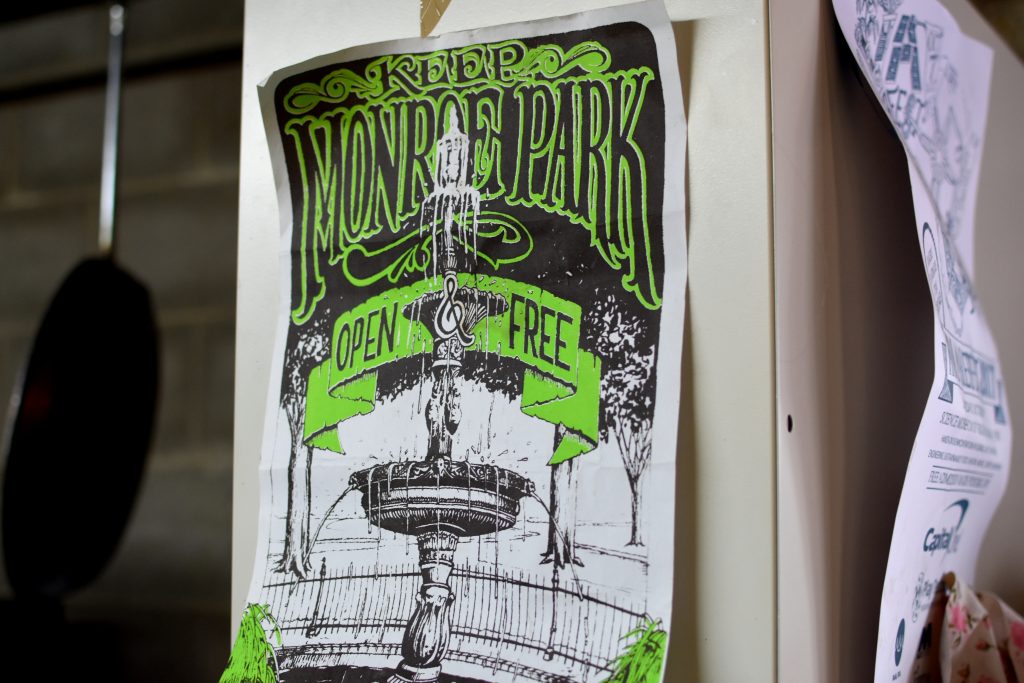 Virginia Commonwealth University closed the park after leasing it from the City of Richmond, months before they’d began planned renovations. People I met who used to shelter at the park described the premature closure as a way to displace people, while volunteers said it made it harder for them to help.

“I moved here from NoVA, and was looking to volunteer,” Emma Dettelbach said. “I knew they met at Monroe Park and I went there to volunteer, but found it was fenced in and shut down before I learned they moved.”

The closure of the park coincided with the loss of their former kitchen space, which operated out of the Wingnut Anarchist Collective before the group disbanded. Now they work out of RVA CreateSpace, a cooperative space for builders, tinkers, and start-up companies in an industrial building on Wickham Street. Arthur Kay, who manages the space, invited Food Not Bombs to work out of his space after the closure of the park.

“People knew to go to Monroe Park,” Kay said. He’s concerned that the renovated park will have new rules, including food safety certification, which Food Not Bombs is currently exempt from. 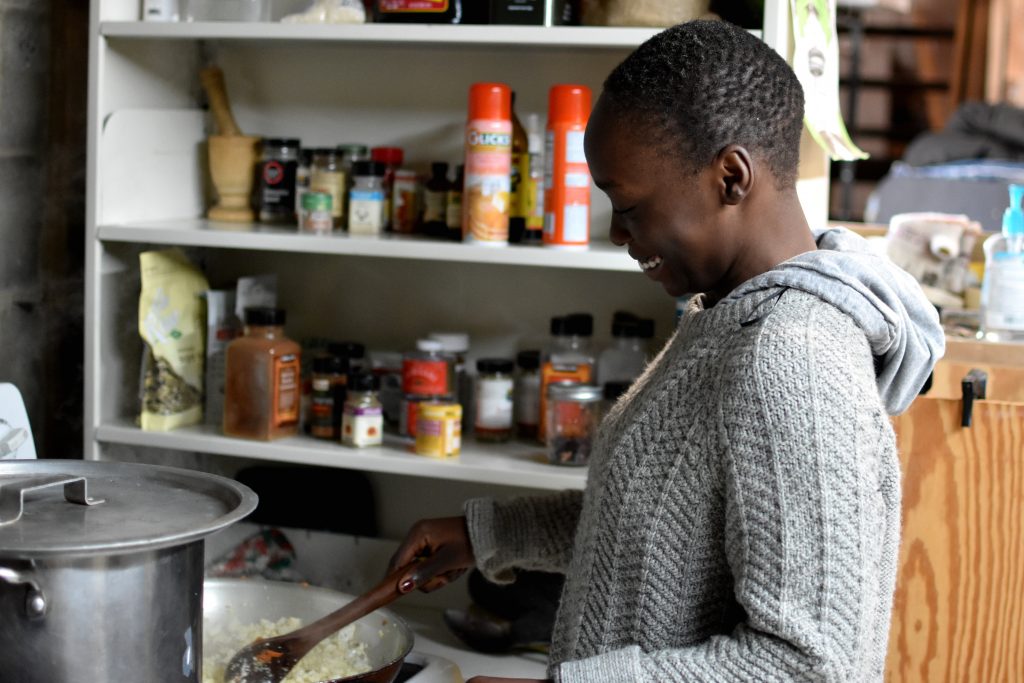 “Our first priority is a clean, sanitary kitchen,” he said, explaining that the high cost and expensive cosmetic changes they’d need to make to get their kitchen certified would be an impractical expense. The space is already practical and clean, with hand washing stations, dedicated dishwashing sinks, and high, ergonomic work tables for cutting and preparing raw produce.

The group moved to Abner Clay Park, but the long-time organizers, Shukri Thomashefski, Aaron Bish, and Thomas, all described it as a harder to access space for many of the people they used to serve in Monroe Park.

They still manage. They make home deliveries, invite locals to their kitchen space to share a meal, and head to Abner Clay Park every Sunday and Monday. If the overflow shelter is open, they go there, too. 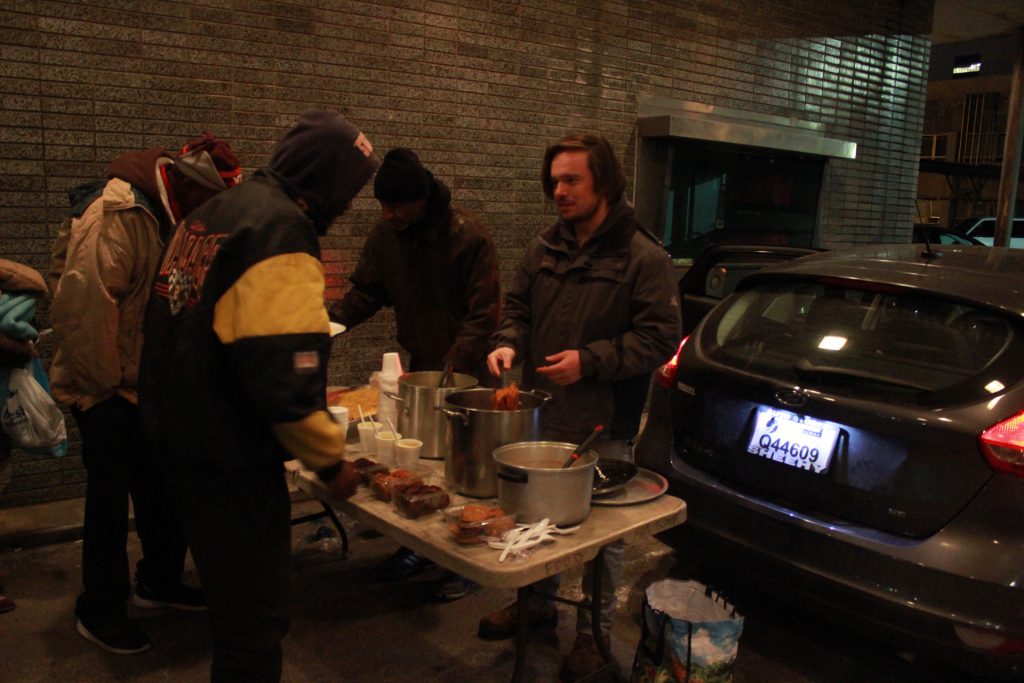 They prepare meals from over 200 pounds of groceries per week, most of it from Whole Foods in Short Pump. Vegetables and fruits with cosmetic blemishes, and frozen meat and prepared foods that just aren’t moving on the shelves are all part of their collections.

“Part of the mission is to not waste food,” Thomas said. His preference is for cooked vegetarian food over pre-made meals or meat, but they never turn safe food down. 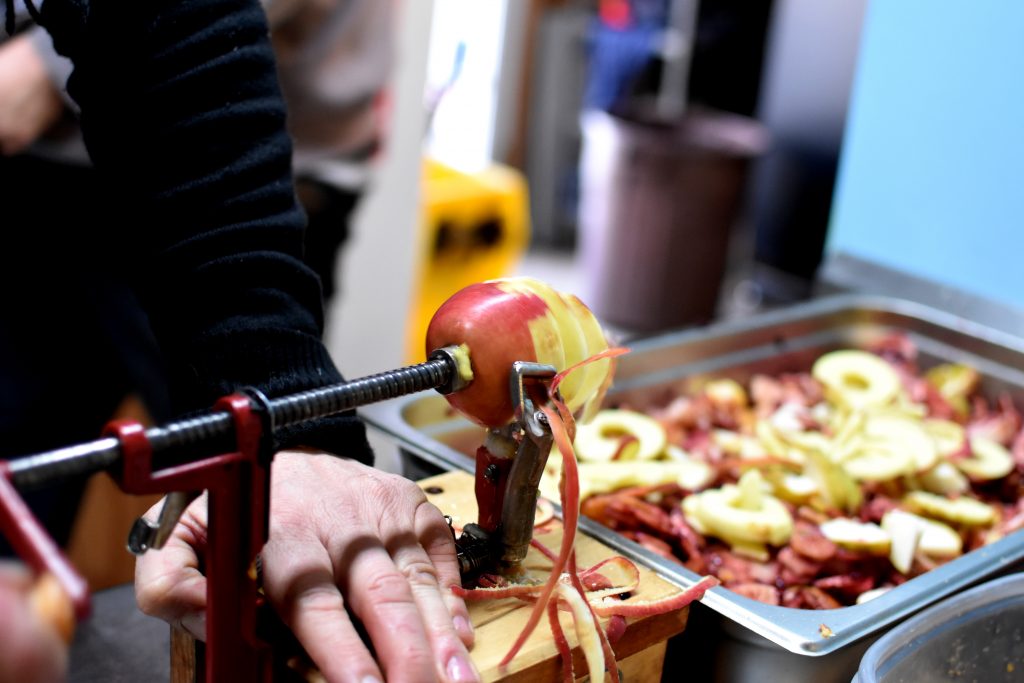 “We want to make the best food. We eat what we cook, too. We make vegetarian and vegan food that people who usually eat meat love,” Thomas said. “We hear from people, this stuff is healthy, it makes me feel good to eat it.”

Thomas is involved in almost every facet of the organization, but he’s not the leader. “I’m the chief facilitator,” he said, noting that each volunteer was self-directed on a recent Sunday. “You do what you want to do here. There wouldn’t be hundreds of chapters if it was a hierarchy.”

Members describe Food Not Bombs as an adhocracy, where people work together with a broad common goal but no formal structure. The worldwide organization is a long-enduring staple of the punk scene, although a small sample of the local chapter included college students, professionals, and even a VCU student who first came to America as a refugee.

Bizhan Khodabandeh, an illustrator who designed a new t-shirt image for the group, first came to the group out of anti-war sentiment during the presidency of G.W. Bush. He’s become a father since he first joined the group, and that’s given him a new reason to keep showing up. 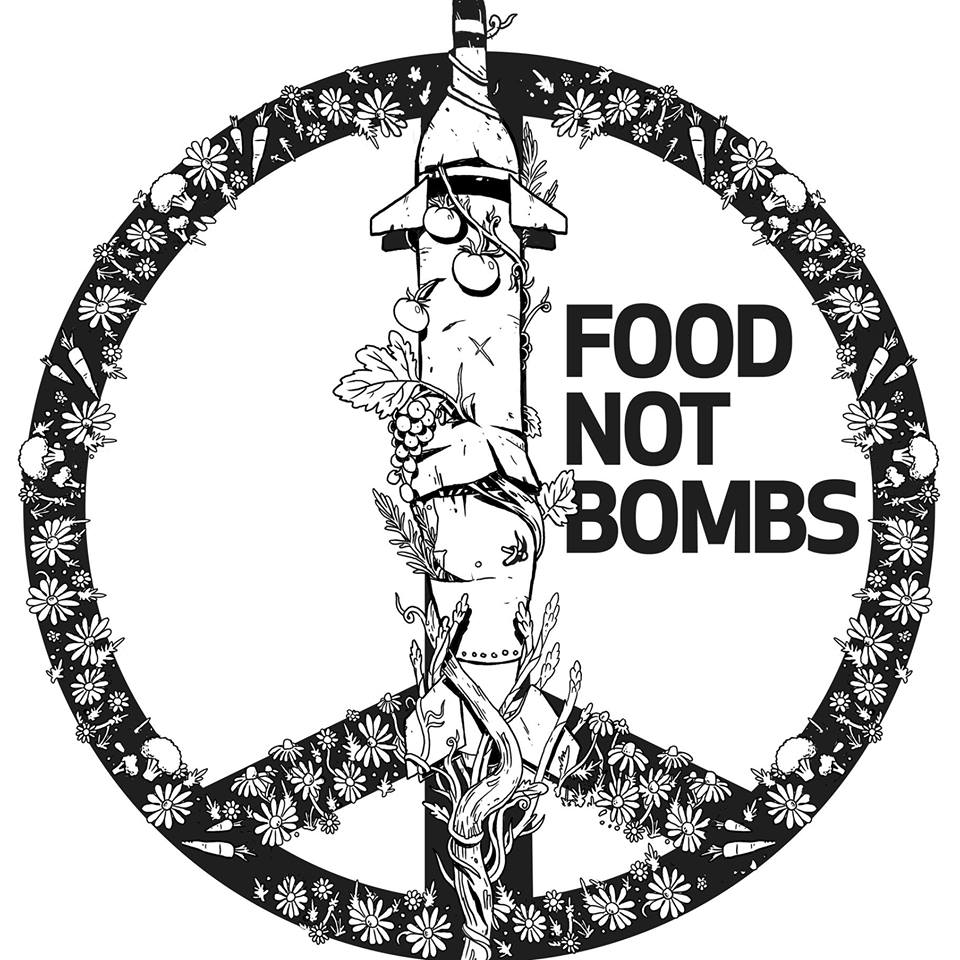 “I started going to some of the local marches and protests which eventually led me to Food Not Bombs,” he said. “I reconnected recently because I wanted part of my daughter’s growing up to involve doing something positive in the community and hopefully that spirit will continue to be a part of her future. She often volunteers with me.”

He wasn’t the only parent. One couple drives in from a nearby suburb with their three teenage daughters; other parents drop off their children for a night of cooking and serving.

Although members had political opinions and perspectives, their commitment was to do direct work instead of performing political advocacy. Many were skeptical that politics or money would solve the problem of homelessness, hunger, and food waste.

“It’s not about the money, it’s about the will to do it,” Thomas said. “People are in crisis situations here. If there had been some natural disaster, the whole world would be here.”

If people want to help, Kay encourages them to check out the Facebook group, or just drop in to their kitchen at 607 Wickham St. on Sunday at noon to cook. “No expertise is necessary, but if you have skills, come share them with us,” he said.