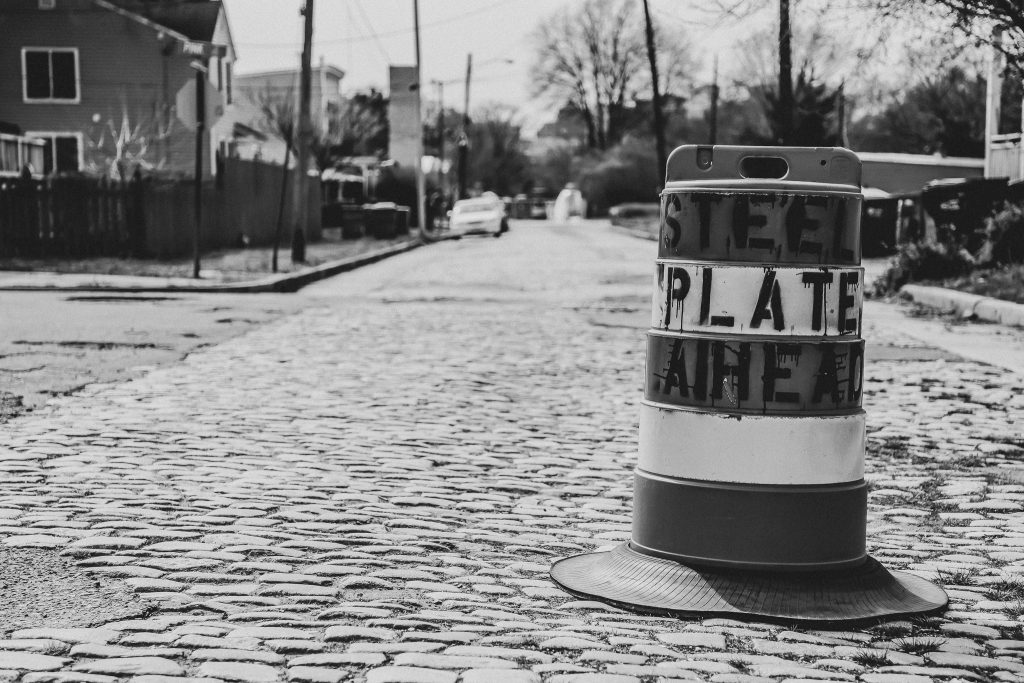 Given the right occasion and generally temperate forecast, there is no time better spent than on the activities we genuinely love; such as hurling garbage at climate deniers, consuming ‘the gluten’ at a bakery across the street from a police station, uninterrupted passion with your significant other or even someone else’s significant other.

In contrast, there are the things we really hate. The things we communally bond over which bring us together…to hate. And in Richmond, if it is not the ticketers lurking at every corner or the eyesore monuments to dead people who fought for slavery- it is the fucking roads. Plebeians (like myself) who are constantly shattering ankles, shredding struts through the cobblestone hopscotch, or navigating across patchworks of the concrete jungle are not so lucky – at least I don’t have kids.

Richmond roads and sidewalks are part of a special connection; a conversation sparker far more potent than any weather forecast, craft beer, or farm-to-table restaurant. This is where I introduce Sonny Raymond. He knows about roads, he’s an engineer and better yet, he lives on quite possibly the worst road in Richmond.

Specializing in car simulation research, Raymond found himself in a poetic situation riddled with just the kinds of irony that make for a good story. Like us, the stress of the workday are not things Raymond wishes to bring home, yet the problem for Raymond isn’t what he brings into his Union Hill abode, its the road he has to travel to get there.

The roads which flank his home represent the worst of Richmond’s public works management. “This is something I really care about. I bought a house a year and a half ago because I really like Richmond,” he said.

For Raymond, the reminder never ends, stretching several blocks in either direction on Carrington Street – a five-block stretch from Mosby Sreet to 25th. This stretch is an unchecked shitshow, exhibiting a series of neglectful disrepairs across its 24-foot width, since its annexation from Henrico in 1906.

The Union Hill community has been affectionately describing this stretch of road “as a minefield across six intersections” and for this reason, Raymond believes it is time to rally. “[Over the last year], I started looking up who my neighbors were, and collecting other information [and then I thought] maybe I can do this.”

His response to the deteriorating road conditions was the Carrington Street Review, a well-documented analysis of the various hazards and options for improvement to the street. However, Raymond advised against framing him as the center of the debate, assuring RVA Mag that the community “has agreed that Carrington needs some work.” He went on to say, “I’m just the type of person, when I want something done, I try to think of what’s the most likely way to make it happen. The intersection of the roads coming together are just poorly designed.”

Motivated by the city-wide monument discussion and signs of road improvement in sync with the recently adopted Vision Zero plan last October, there was optimism that the Carrington Street Review would gain some traction. Yet once presented to the city, the response couldn’t be more Richmond.

Citing a Virginia Department of Transportation (VDOT) study from two years ago, Richmond Public Works – the agency tasked with road upkeep – found that “less than 100 drivers” go through the whole length of Carrington Street in a day so “not an issue”.

But there is a nefarious technicality within all this. If one were only counting people who drove the entire course of Carrington Street, the number wouldn’t be problematic. According to Raymond, if one were to include the number of people driving along the numerous intersections across the street, 100 would turn into around 3,000 in any given day. “There’s probably a thousand people who cross Carrington at the intersections every day,” he said

Yet some in the neighborhood don’t carry the same enthusiasm for repairs and upkeep. The Better Housing Coalition of Richmond,  the newest addition to the area, adds little more than thoughts and condolences. RVA Mag spoke with Lynn Aterwood, the organization’s Vice President, and asked if the street posed any problems. She responded definitely “No, not at all. It is an incredibly attractive neighborhood. It’s so convenient to downtown. I don’t think the condition of Carrington Street makes a difference on whether people would want to live here or not.”

The Goodwyn at Union Hill, a new 52-unit multi-family housing development will be using Carrington Street as the only entrance though. While she did agree with a neighborhood effort to repair Carrington Street, she was more enthusiastic about the cobblestones. ”I really don’t want to tell someone to get rid of the cobblestone, they’re unique and add character, so I think that’s a neighborhood decision,” said Aterwood. “They are very cool looking! Wouldn’t want to ride my bike on them!”

Aterwood showed RVA Mag the development plan. “Originally one building, the neighborhood wasn’t happy about that so we broke it down into six. We have our sidewalks, our bike lanes.” Looking for options to propose to the city she opined that maybe the neighborhood could come up with some suggestions or “clearer signage around each intersection or funding towards a roundabout, I know that helps traffic flow.”

After a while she did admit that there were a number of very awkward intersections plaguing Carrington St, going so far as to call it “funky”. “You come in on Mosby and three or four streets are coming together at different angles.”

Despite the tempestuous emotions usually reserved for high art or the opera by incensed homeowners and civic associations married to the aloof beauty of the cobblestones, the final authority comes down to the Department of Public Works. And they were swift in muffling the calls to action and quickly extinguished the banners of resistance. Sharon North, Public Information Manager for the Department of Public Works, was sharp in her response to RVA Mag’s inquiries on the worst road in Richmond. “I’ve consulted with Transport Engineering and have been advised neither Departments of Planning and Development Review nor the Department of Public works have Carrington Street identified for improvement in any formal planning document or Capital Improvement Program.”

With a Walking Score of 78 out of 100, maybe the problem is simply over-stipulated or we’re all still just victims of our collective hatred. Or I’m just an asshole, after all it is just a street.

Still, Raymond isn’t convinced this is the end. “If you don’t think it’s an issue, [I] invite you to take a walk, ride a bike, or drive a car down the street and test it out for yourself.”

Maybe VCU should just fix the road. It would take several years to finish and several million more in taxes, but at least they’d get it done. And they’d probably throw in an art studio somewhere in the mix.