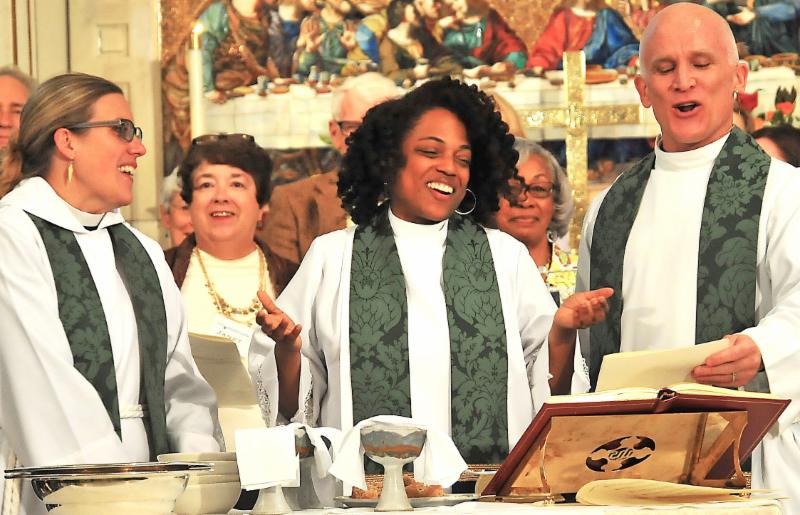 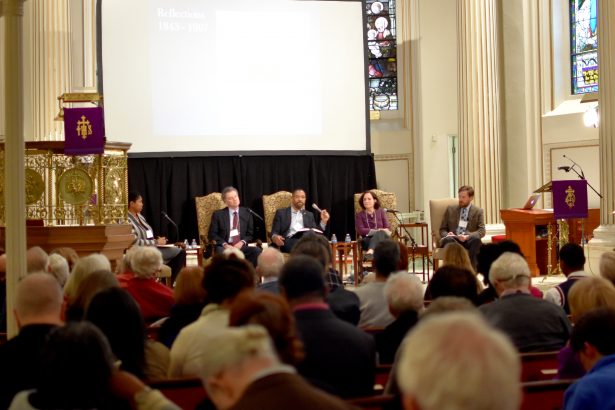 The event, Bending Toward Truth: A Forum on Race and Religion in Richmond, kicked off on Saturday night and ran through Sunday worship, but it really began two years ago, on a day that the Rev. Melanie Mullen remembers with a laugh full of wonderment. “I don’t know what got into me, but I just wrote a letter to Bishop Curry,” she said, describing a letter she sent detailing the struggle St Paul’s was having with its history.

The church had been quietly grappling with its legacy for years, but it had begun a public dialogue after the mass killing at a historically black church in Charleston by a man obsessed with symbols of the Confederacy. Members of the congregation, where 1 in 10 members are black and many white members can trace their lineage back to the Civil War, started looking around at their own Confederate iconography and feeling uncomfortable.

“Wallace [the former head priest] was giving these sermons about it, and I was kind of the resident black person in the clergy,” Mullen said. She reached out to Curry, the recently elected presiding Bishop because he was talking about something he called the Jesus Movement, a shift for the church to focus on the biblical narratives where Jesus stands for justice and equality. In his three year tenure, Curry has become an outspoken voice on issues ranging from tribal rights for the First Nations people to transgender rights.

For St Paul’s, that letter later led to this event; for Mullen, it led to her new position as the Director of Reconciliation, Justice & Creation Care for the Episcopal Church, based in Washington D.C. “The Jesus Movement has to include racial reconciliation at its core,” she said, along with other social justice issues like the rights of women and LGBTQ individuals.

Part of her job is to share the tools and resources St Paul’s created around racial justice, which she said came out of the congregation. “The octogenarians in this church did the research work,” she said. “We had to teach some of them how to use the computer, how to research online, but they did this all as an incredible act of faith.”

Mullen said it really hit for the people who had long, storied histories.

“That’s what made it successful. They were looking into the histories behind their own names and were horrified by what they learned about the lives of slaves and how they had their names taken away from them,” she said.

Graham began by explaining that the pro-slavery views held by parishioners were rooted in white supremacy. “They defined the enslavement of humans not as an act of violence, but as benevolence, which they justified by their Christian faith,” he said.

This theme of individual responsibility was echoed throughout the evening’s panels, first by Ayers, who said that churchgoers reconciled faith and slavery by focusing on the ways they personally treated the people they kept enslaved. Ayers compared their outlook to our contemporary debate around the statues. “Does it matter what the personal motivations of Lee and Jackson were if the result of their actions was to establish a state on the perpetual bondage of human beings?”

O’Leary and Graham continued the history lesson into the 20th century, noting that the church had often fought overt racism like that of the Ku Klux Klan and legal segregation, but had endorsed the Lost Cause mythology of a noble and beneficent Confederacy, supported the statue to Lee, and advocated for voluntary segregation.

Mary Munford was one major figure in the early 20th century Graham focused on. Although she founded the Virginia Inter-Racial League and served on the board of the National Urban League, she was seen as an impediment to progress by African American leaders, said Graham, who described her as paternalistic. He quoted Wiley Hall, secretary of the Richmond Urban League, who wrote that she seemed to be one of those “liberals willing to work for Negroes but not to work with Negroes.”

It was in the later decades of the 20th-century that St Paul’s finally began to disavow its identity as the Church of the Confederacy to begin “proclaiming Christ in the heart of the city,” a phrase that became the official motto sometime in the ‘90s.

Other speakers throughout the night included CEO Christy Coleman of the American Civil War Museum and other non-profit leaders, along with a panel moderated by the Rev. Ben Campbell, author of Richmond’s Unhealed History, consisting of clergy from Richmond and the counties of different denominations. Subjects ranged from historical to modern-day inequalities, and clergy panelists, in particular, explored the ways that individual responsibility has been used to evade collective work to address those inequalities.

During a short intermission between panels, attendees ate sandwiches from brown bags and mingled in the parish hall with speakers, visiting clergy, and event organizers, including Barbara Holley, a founder of the History and Reconciliation Initiative.

“I came here in 2003,” she said, describing it as one of many churches she and her husband looked at, but the first that had a “truly welcoming congregation.”

She said that one sermon in particular by the previous rector, the Rev. Wallace Adams-Riley, who had asked, “Do we want to be known as the church of the Confederacy, or the church of reconciliation?”, had motivated the formation of the HRI. The church quietly removed Confederate flags in the 1970s under then rector Rt. Rev. John Shelby Spong, but in 2015, the vestry, or board, held a robust public process and then voted to remove remaining battle flag images that still embellished war memorial plaques and kneelers.

Holley, who is black, said they aren’t looking to remove their infamous stained glass windows of Davis and Lee, but are “changing how we speak about the windows in a way that reflects what they really are.”

She said attendance had exceeded her expectations and showed that they needed to continue their work. “The amount of time we have in one weekend, for all these people isn’t enough,” she said, noting the number of speakers and attendees. She’s already at work planning a fall symposium. She said the event today had done its part to “begin a conversation, but we have to do this again. We have to keep the momentum going.”

This story has been updated; the process by which St Paul’s removed images of the Confederacy in 2015 was clarified. A spelling typo in the title of Campbell’s book was corrected.

Crying On Camera: An Interview With Adam Ferrara

Welcome to another week of Missed Connections, where things are getting intriguing! Honestly, during the pandemic, it's been all I could... READ MORE

Crying On Camera: An Interview With Adam Ferrara

Welcome to another week of Missed Connections, where things are getting intriguing! Honestly, during the pandemic, it's been all I could... READ MORE