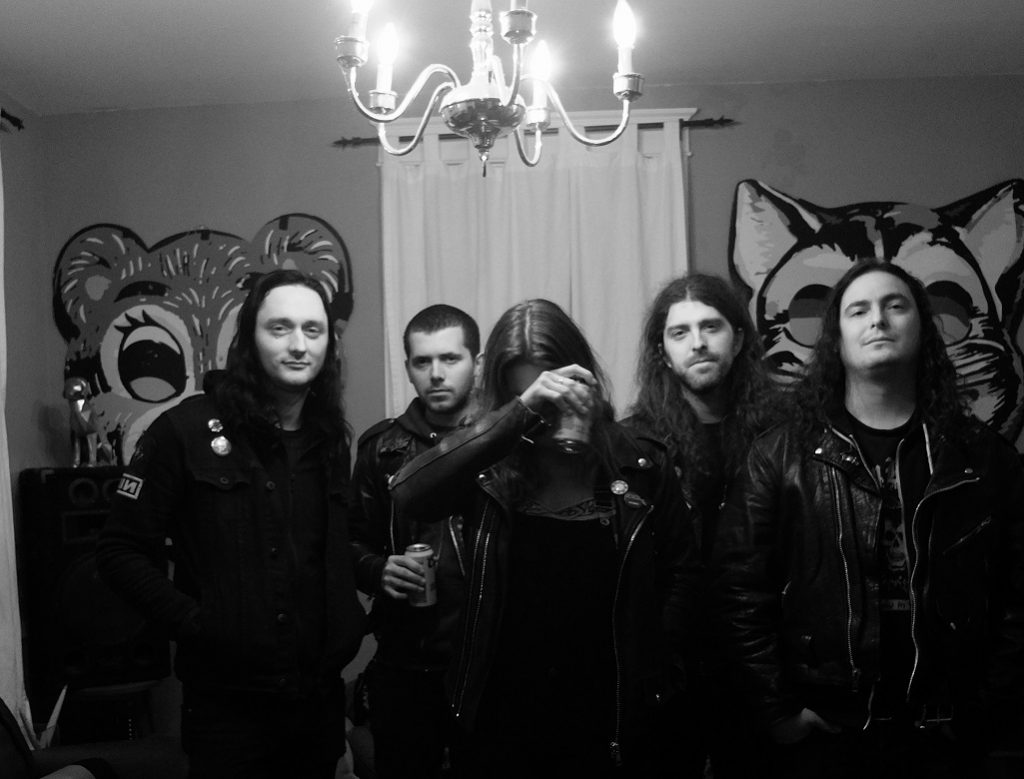 Richmond hardcore punk band Asylum has some big plans on their plate after releasing their debut album, Modern Hysteria. I sat down with Kasey Simcoe, lead singer of the band to discuss touring plans, the bands unique recording process, and what to expect from them in the near future.

Although Asylum has playing venues around town for about six years now, house shows are still something they hold near and dear to their heart. They have continued to uphold the tradition by playing their last house show in Baltimore recently with friend’s Syringe and the new aspiring band, Total Maniac. In addition to their newly released LP, Asylum has been spending these past weeks in Baltimore and Philly showcasing a newly released split EP with fellow Richmond band Nightfall.

The band said Philly is always a place they love to return to during many of their east coast tours. As for new locations, they are planning a European tour in the near future as well as a trip to Canada. But Richmond is still their favorite place to rage. “Some of the best nights we have had have always been in Richmond because all of our friends are there. Especially at Strange Matter, a couple of the band members are staff there. With Richmond you can always count on good vibes and a community that is always really supportive of what you do,” said Simcoe.

When it comes to their sound, guitarist Forest Mallonee said its definitely evolved over time. “During the beginning, we definitely started out with more of a rock and roll influence, but gradually transitioned toward more of an 80s British metallic crust direction,” he said. “We definitely get a lot of comparisons to Sacrilege which is dope in my opinion.

And this latest record definitely showcases them tapping into the crust punk/dark metal genres.

“Collectively, I just think we have a bunch of anger we enjoy releasing with our punk music,” Simcoe added.

The band’s creative process usually ignites at band practice when somebody from the band comes in with a new riff.  “Someone will start to mess around and play a riff that goes along with it, and then as we continue to collaborate and feed off each other, the song eventually grows and matures,” said Mallonee.

Simcoe, who used to be a journalist herself, said that as far as lyrics go for the song making process she has a book that she carries around for when inspiration strikes.  “I wouldn’t call it a journal by any means, it’s just a junkyard of thoughts that I end up grouping together based off the feelings that are evoked when the band is in the midst of creating a new song,” she said.

Asylum recorded Modern Hysteria, which was released back in January, with their good friend Ricky Olson at the Ward. “Not only is he a really great friend of ours, but he really understands the sound that we are trying to create and creates a really relaxing environment in his masterpiece of a studio which makes for a really organic recording process, ” Simcoe said.

Having recorded the 11-track album in just three days, Simcoe said that they usually come in prepared and with the help of Olson, they’re able to lay down tracks quickly.

The title track is a favorite of the singer’s. “The song its self-has got so many layers to it and this is the first time we were able to sample music for the album which is really sick because it has made for a lot stronger and more powerful of a song,” she said.

Having started in Richmond originally, Mallonee is excited that Asylum is getting their gears moving again. Simcoe, originally from Baltimore, is moving back to Richmond since her departure in 2015, but plans to move back within the next couple months to focus on the band’s future.

Simcoe said she’s excited to be back after a short period of inactivity while going through personal issues with family and not having been a part of any sort of creative process in Baltimore. “ I am ready to go on tour and start yelling at my friends again,” she said.

Be on the lookout for Asylum shows in the coming months.