The New Generation Of Skaters Ramps Up - RVA Mag 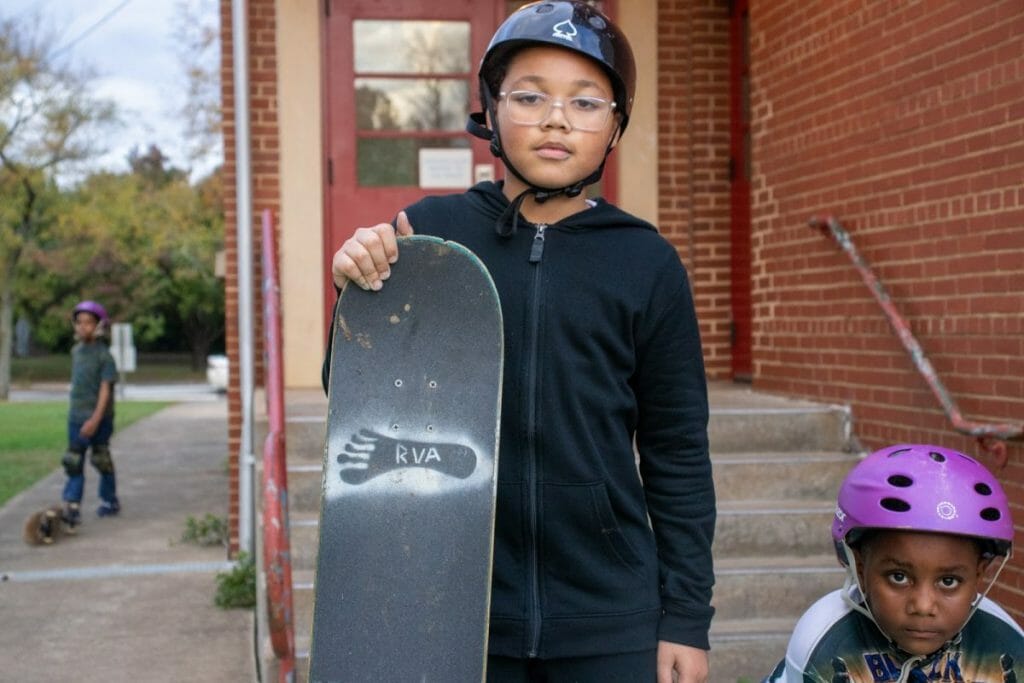 With RVA SK8 Club, the Richmond Area Skateboarding Alliance is passing on their knowledge to the skateboard-loving youth of Richmond’s elementary schools.

Skateboarding isn’t the most conventional sport — within skate culture, plenty don’t acknowledge it as a sport at all. However, as the popularity of mainstream competitions such as the X-Games, Street League Skateboarding, and most recently, the upcoming 2020 Olympics, it is inevitable that a new generation is being inspired to pick up their first skateboards.

RVA SK8 Club is an attempt by aging skateboarders to reach out to the new generation. Bean Weatherford, Richmond Area Skateboarding Alliance’s (RASA) RVA SK8 Club Coordinator, had previous experience teaching skate camp in San Francisco, and decided to bring his love of skateboarding to Richmond.

“When I moved back to Richmond, I noticed there were no skateboarding programs geared towards kids,” said Weatherford. “Around this time, I met Chris and the other RASA folks at a Thrash for Cash event at Hardywood, where they were raising money to build Texas Beach skatepark.”

From a flyer on RASA’s merch table, Weatherford learned that the group was seeking a coordinator for an after-school program they were attempting to create. Weatherford volunteered, and soon had the job. Then the group had to convince the city to make their dream project a reality.

“We made a general plan and pitched it to Richmond Parks and Rec,” Weatherford said. “We decided to work with in the structure of their previously existing after school program, in which specialists (like ourselves) bring fun things for kids to do.”

In October of 2018, RVA SK8 Club began placing their two-foot quarter pipes and kicker ramps down on the USA map painted on the blacktop outside Richmond’s Bellevue Elementary. One grant, 12 schools, and 300 kids later,  RVA SK8 Club has been consistent in their mission to bring skateboarding to the kids.

While they’re still using the same ramps, they have definitely stepped up their game in other ways, going from stacking boards in the backseats of their cars to buying portable Smart Boxes in which to store equipment. The program has just reached its one year mark, and according to Weatherford, they’ve learned a lot of lessons.

He elaborated on a few. “Spread the ramps far apart from each other so kids going up and down ramps won’t run into each other. Put a knee under kids boards while helping kids drop in. Learning how to motivate kids and getting them to concentrate on the task at hand.”

SK8 Club’s kiddos usually spend most of their time taking turns trying to plant both feet on the board without falling off. They’re likely to slide down the quarter pipes on their butts at first. The braver students have the SK8 Club counselors hold their hands, guiding them as they learn to “drop in” for the first time. A bold few even get to the point of dropping in on their own.

Ten-year-old Mekhi is one of the few who has been able to accomplish this feat. This is his second time with SK8 Club, as the after school program has visited his school, John B. Cary Elementary, in both Spring and Fall of 2019. His favorite part of skateboarding is how free he feels while doing it.

“When you’re skateboarding, you can like feel the air going through your skin and your hair,” said Mekhi. “And you can get some fresh air by doing it.”

Street skateboarding culture will always have a tenuous relationship with the law. Skateboarders often use public stairs, ledges, benches, and any other obstacle they can find as a springboard for potential skate tricks. From abandoned buildings to well-known businesses, almost everything looks tempting to a skateboarder. It’s a concrete jungle in the city, and everything looks like fair game. The thrill of nailing a trick usually outweighs the fear of getting arrested. This outlook often leads the powers that be to stereotype skateboarders as law-breaking delinquents who cause property damage.

However, RVA SK8 Club wants to show that this is outlaw stereotype isn’t all there is to skateboarding. By showing that skateboarding can be taught and practiced in a fun, safe environment, and that it has a place in schools just like football and basketball, RVA SK8 Club hopes to break down barriers and dispel negative stereotypes. Just like the young children they work with today, many SK8 Club volunteers found their love for skateboarding in their youth, in the most innocent and childlike ways.

For Devon Jones, one of the newest SK8 Club volunteers, his love for the sport goes back to elementary school. “Skate culture exploded into a huge cultural phenomenon following Tony Hawks’ X-Games performance and subsequent video game franchise,” he said. “Suddenly kids were showing up to school with finger boards, fat skate shoes, and baggy pants. Even cartoons like Rocket Power on Nickelodeon heavily featured skateboarding and other extreme sports as major plot points.”

That was all it took — Jones was hooked. “I was fascinated by the culture and the sport,” he said. “The athleticism paired perfectly with creativity in a way that not only burned the infinite energy of my childhood but also engaged my mind and imagination. And still does.”

Though it may seem somewhat risky to the outside observer, skateboarding actually has a lower rate of injuries than many traditional sports. Nonetheless, RVA SK8 Club takes all necessary steps to avoid any potential injuries, making sure that kids wear their helmets at all times and have at least one volunteer at each obstacle to keep an eye on them while they make their attempts.

Before the students begin skateboarding, they gather around in a circle to participate in a game of skate trivia. Trivia allows the volunteers to vet the students’ knowledge and figure out who’s most familiar with what they’re about to do. Those who answer trivia questions correctly are the first to put on their helmets and get their choice of board.

Trivia may be fun, but pre-skate stretching is mandatory and is the first thing the students — before any trivia questions are asked. Limbering up is key to preventing injuries. Local skateboarder Ian Mondragon, who rides for the locally owned Good Time Skateboard Co., usually leads the stretching sessions.

“To most of the kids, the action of skateboarding Is completely foreign,” Mondragon explained. “It’s important to stretch and warm up to gain a familiarity with one’s body before trying to learn.”

Skateboarding was long seen as male-dominated, but that has changed in recent years, as women becoming professionals are getting larger recognition on teams, in contests, in skate videos, and at larger skate-centric events. Though the majority of the SK8 Club staff are male, around half of the students are female, and the dedicated female SK8 Club volunteers over the course of the program always encourage the young girls to keep on pushing.

“I just try to encourage them to do whatever they want, even if that just means they’re only comfortable skating along while I hold their hand,” said RASA President Adah Kanter. “If they want to skate, then ‘Let’s get you on a board, girl!'”

“It’s fun, but it’s really hard at the same time,” said nine-year-old Serenity. [But I know] I can get it at some point, if I keep doing it.”

“It’s good for all of the kids to be learning resilience,” said Kanter. “We learn best from falling down, literally and figuratively, and choosing to get back up and go at it again.”

On rainy days, volunteers come up with a creative skate-related activity to keep the students engaged. Most recently, some of the students got to design their own pro models.

During the SK8 Club season, Saturday sessions are held occasionally, at either Carter Jones Skate Park or the Southside Community Center Park. These sessions give the more enthusiastic kids a chance to drag their parents out of the house as they continue their drive to skate. RASA is a driving force working to create DIY skate parks in the city — such as the Texas Beach Skate Park — and their efforts to create more spaces for kids to skate tie directly into the work of RVA SK8 Club.

RASA is a non-profit, and in order to achieve its goals, it relies on grants and fundraisers for funding. Currently, they have prospective plans to increase the amount of Saturday SK8 Club sessions, and to expand the club’s offerings to local middle schools. They’re also working to create a summer program at skate parks for kids who attend Richmond Public Schools.

“There is so much potential for this as not just an after-school program, but maybe a year-round program — one that operates on a sliding scale to make it affordable for all kids in Richmond and the surrounding counties,” said Kanter. “As it evolves, we’re figuring out what is possible for now, and in the future. It’s very exciting!”