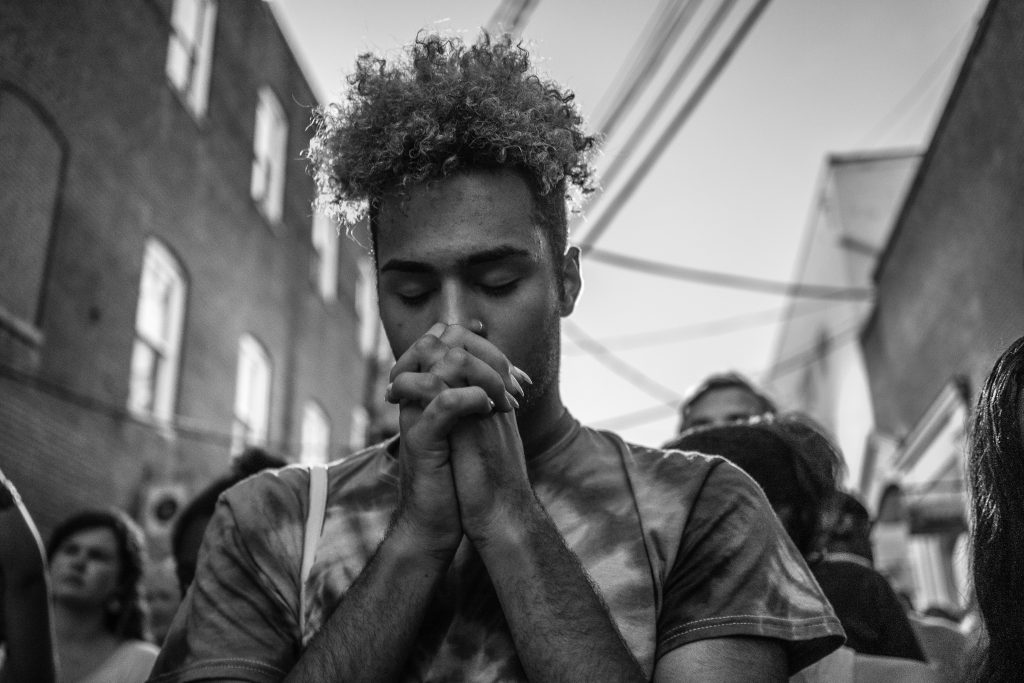 The photographs in this essay are a terrifying glimpse into the events that unfolded in Charlottesville at Unite the Right this past weekend–events that for me, started on Friday evening at a small nameless field on the University of Virginia campus and would not end until late Sunday evening.

I cannot describe the feeling of dread that came over me as I looked down on a dark field and saw hundreds of angry white men preparing their torches, organizing a ‘security detail’, and ‘falling in’ ranks behind one another to light their torches during their march of terror. What these photos do not convey is the faint acrid smell of torch fuel that lit the air, the anti-semitic battlecry coming out of the darkness, or the relentless pain that mace and pepper spray inflicts.

But that was only the beginning.

On Saturday morning I arrived at Emancipation Park just as the violence began. Looking around, it felt like a giant cage match. Police officers in riot gear held the perimeter, while all of us who remained inside the protest area were treated to the full spectacle of the clashes taking place. At one point somebody told me I was bleeding, I didn’t remember being cut or feeling any pain where the blood was. As I washed it away, a chilling reality sent in. I was fine–this was someone else’s blood.

As you can see from the photographs and our coverage, the entire RVA Mag team was in the middle of the chaos. In some cases, I was so close that white supremacists’ hate spewing saliva landed on my lens. I was able to get this close because of my privilege, and I want to be clear about that. I took full advantage of this to make these photographs and document as best I could what happened on the day, and these photographs to bear witness to the truth of what I saw. I took no money do this; Charlottesville is my home and it has been for over twenty years. I love my city and its people and I will continue to fight for it and them.

Jason Lappa is a photographer, journalist, and documentarian based out of Charlottesville, Virginia. He is also a contributor for RVA Mag and is leading a project called PROTESTOR, an an ongoing journal of photographs that I am logging as I attend protests and marches across the United States for the duration of the Trump Administration.