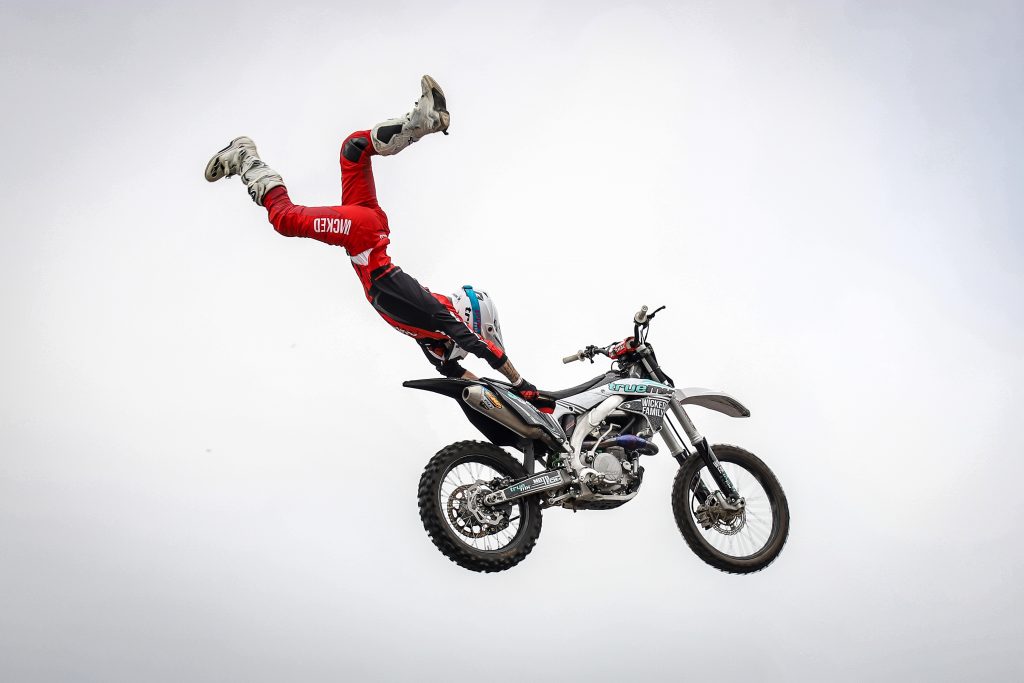 The Virginia State Fair is a pageant of all things last-century wholesome, an event dedicated to the agricultural arts which made Virginia the Commonwealth it has become today. Since 1854, the state fair has held court (only put on hiatus due to the Civil War) and moved to its current location in 2009 with the opening of Meadow Farm. And what one might find at the state fair is as diverse as it is unexpected: everything from the naming of Miss State Fair who will go on to compete in Miss Virginia, to the unveiling of the state’s largest watermelon, weighing in at 254 pounds.

Yet something else also happened this year: the state fair got ramp rad with the addition of a badass freestyle motocross and BMX performance. Not to take anything away from the demolition derby, which probably came in a close second for what was palatably cool at the state fair, the motocross and BMX ramping was actually a killer spectacle. Set against the backdrop of half pipes, jumps, flames, hydraulic ramps, and extreme athletes, the show was one of hang time, crowd interaction, and potentially death-inducting antics.

RVA Mag caught up with Trevor Cartmill on Sunday to see what the vibe is on the state fair circuit, and to find out what’s going on with freestyle motocross. Originally from Kentucky, Cartmill has been racing dirt bikes since he was seven years old, eventually going pro at 17. Now at 26, he jumps professionally and travels the U.S. performing freestyle motocross.

“I’ve been on this tour since July. This is actually the last stop of the tour,” said Cartmill about the Virginia State Fair. “We started the tour at a rodeo show in Iowa, that was a four day show. After that, we moved over to South Dakota doing a seven show there. The rest of the shows have been fairs on this tour.”

Cartmill is part of a squad that includes another motocross rider, Ryan Logan, along with BMX-er’s Zach Newman and Chase Pauza. Being on the road together since July has made them a tight squad.

“We have the same passion. We know what’s up. We all meet and click. We’re the same people,” said Cartmill before rattling off a list of places they’ve done shows together this year: Iowa, South Dakota, South Carolina, West Virginia, New Jersey.

“We’ve been all over the place, it’s been a rush.”

When asked about seeing the U.S. via the state fair circuit, Cartmill said it was interesting to experience different regional cultures.

“You see the country and meet all these different people. You absorb so many different things in a small amount of time that it is almost over-whelming,” he said. “You’ll drive 12 hours in one direction and everyone is so different, it is un-imaginable.”

Yet the squad still has a considerable amount of down time between performances, with their work primarily consisting of setting up ramps and showing up for their performances.

“Most of the guys on tour ride bikes, so if we’re close to a local skate park we’ll hit that up…anything to kill time,” Cartmill said.

When the grind of life on tour collides with the realities of providing a daily dose of death-defying antics, the potential for a slip up that has serious consequences becomes gnawing reality. Even something that looks simple (like jumping over a show participant on a BMX bike) can have a disastrous outcome — something the presenter was quick to play up during the show, but not taken lightly by the squad.

“Just about every show I’ll have a mishap,” said Cartmill. “I have a bad habit of too much throttle, I’ll go long and that’s bad when you jump on pavement when you land flat. Last time I did that, I almost broke both my hands.”

For now, Cartmill is stoked to be jumping professionally. He has been on the circuit for two years now and does not plan to change that any time soon.

“I’ve not had a real job for two years because I’ve been so consistent with shows. I’ve not even had to go look for a job, let alone have one.”

Asked about getting to the X-Games, he made it clear that the athletes have to be next-level.

“You have to have the gnarliest tricks in the game, and for the X-Games you have to be invited,” he said, also adding that he wants to get on Nitro Circus (the “action sports collective” led by stunt master Travis Pastrana).

Before singing off, Cartmill made it known that it’s all about “chasing your freaking dreams…that’s what I got to say.” True words from a performer who is only one step away from the hard goodbye.

Some of the best photos of the rad ramping at the Virginia State Fair can be found below: