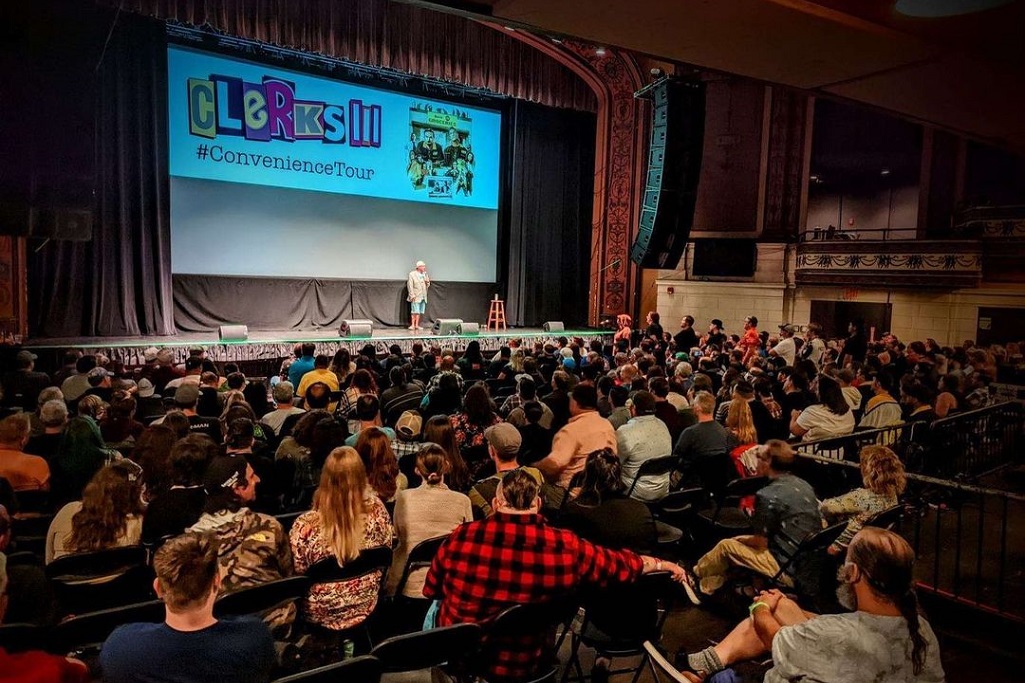 There are very few casual fans of Kevin Smith’s View Askewniverse. Most fans dive deep into the depths of the world he has created and are deeply and emotionally attached to it, tying it into various aspects of their lives. This was very clear this past Sunday and Monday at The National, when Smith hosted two advance showings, with subsequent Q&A, of his newest film: Clerks III, a second sequel to the film that originally made him a household name. Many fans showed up in various forms of cosplay, from those wearing uniform shirts for QuickStop and Mooby’s — the fictionalized version of the real convenience store Smith worked when he made Clerks, and the fictional fast food franchise in Clerks II, respectively — to those dressed as the walrus from Tusk. Many also wore t-shirts and hoodies with the face of Smith’s longtime best friend and costar, Jason Mewes, emblazoned on them.

Whether you were part of the packed house Sunday evening, or attended the slightly more empty Monday show (Smith joked that they had almost made him cancel the Monday show, but he was damn glad they didn’t), it was a good time for all, and about as close to a religious experience as some of us were going to get (me, I’m “some of us”).

When I tell you Kevin Smith loves his fans, I need you to understand that I mean he loves his fans. Fans lined up to microphones on both sides of the room for the Q&A, going almost as far back as the soundbooth, ready to ask him their questions. People asked an extremely wide variety of questions, from inside information on their favorite films to stories about the king, George Carlin, to thoughts about the screening we just saw to life advice for entering your forties. Smith joked at the Monday show that Q&A meant a little Q and a “long ass answer,” and he wasn’t kidding. If you asked Smith a question, you could be prepared for him to answer it and then some, but you’d enjoy every part of the ride.

Along with answering questions, Smith shared anecdotes from his life growing up in Jersey (the way his Dad gave him Carlin records may or may not have been legal, just an FYI), told us about writing his requested “dream role” for George Carlin, praised his friends for their talent, and regaled us with a tale of his full circle moment with Busch Gardens that ultimately didn’t happen.

Another thing he discussed at both shows was his infamous heart attack four years ago. After doing a show in Glendale in 2018, Smith suffered a massive heart attack backstage, only to learn from doctors later that he had survived a type of heart attack infamously known as the “widowmaker.” At Monday’s show, he was able to meet another member of the survivor’s club, who actually had his relatively soon after Smith had his.

Fans of View Askew know that Smith isn’t shy about putting aspects of life into his work, and Clerks III is mostly inspired by the aforementioned heart attack. Randal Graves (Jeff Anderson) suffers a heart attack while working at QuickStop one morning and manages to survive. Having a moment of clarity, he realizes that what he’s always wanted to do is film a movie. Now with a new bill of health, he aggressively recruits his best friend, Dante Hicks (Brian O’Halloran), to help him make the low budget Hollywood blockbuster he was always meant to direct.

Sounds a little familiar, yeah? This is the part where we get a little spoilery, so beware.

For anyone brand new to the Clerks series or the View Askew franchise as a whole, this might not be the one to start with, as there are a ton of references to not only the previous Clerks films, but also to things in the View Askewniverse as a whole. However, those of you who have been around for a minute, or have at least seen the first two Clerks films, should be in the clear.

Biggest Sad Moment Up Front: Becky (Rosario Dawson) dies. We learn a lot about what happened between Clerks II (2006) and now — some of it good (Jay and Silent Bob own the cannabis store next door), and some of it bad (Becky was hit by a drunk driver while pregnant with her and Dante’s daughter).

A lot of the film feels like a pseudo- “making of Clerks” documentary, as we watch our friends recreate the first film and live out multiple things that have been explained in interviews and behind the scenes docs about the first film in the series. For example, the infamous “gum in the locks” gag? Written in to explain why they had the blinds down during filming, as they were filming in the original QuickStop overnight.

Much of the film is aimed at fans of the franchise, who will catch all the winks at the camera in a very “I see what you did there” way. Fans who know the original ending of the first film will see the ultimate throwback for Dante at the end of the film — but not before Randal rushes to apologize and explain that Dante was always the main character of his film, and that he genuinely loved and appreciated him.

The big overarching theme for Clerks III is ultimately fulfilling your dreams and doing what makes you happy before it is too late. Because honestly? Tomorrow genuinely may not come, and second chances are not always rewarded. If Randall hadn’t had his heart attack, he may never have made his film (cheekily titled InConvenience), but it shouldn’t have taken a near-death experience to get him do that, or to tell his best friend that he really was always important to him. But that’s how it works sometimes; sometimes we don’t get the timing right until the clock strikes 11:59.

Is Clerks III worth seeing? Without question. If you’re a longtime fan, you will catch many nods and winks to the camera from friends we haven’t seen in a while, all of which will make you smile. But if you are the elusive casual Kevin Smith fan, it’s still absolutely worth it if you want just a good time. You may not get all of the little easter eggs, but if you just want a good, dark comedy about reaching your dreams before it is too late, the storytelling is worth it alone.

Clerks III is out now in select theaters and for rent on Amazon Prime.