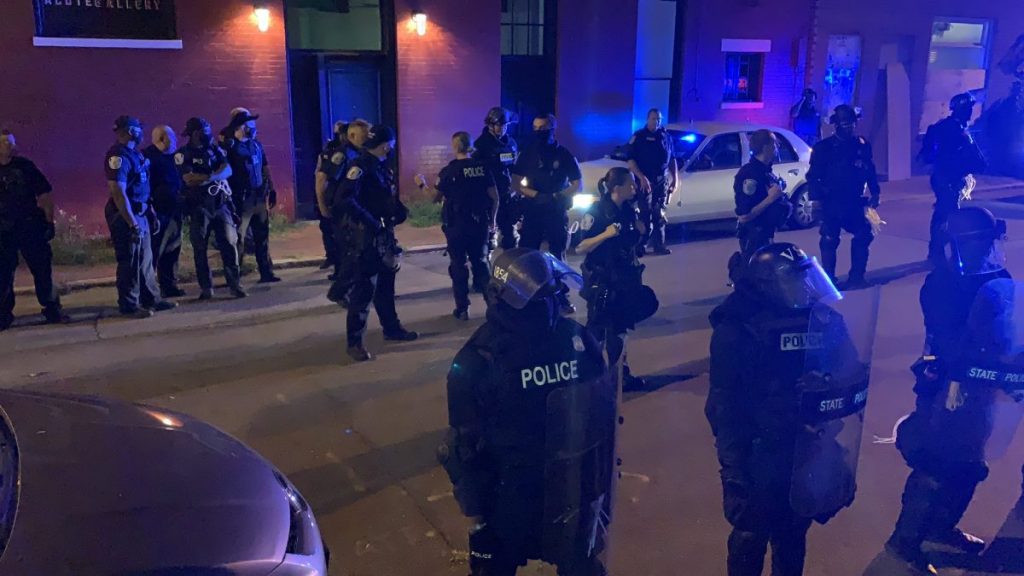 Fueled by a dubious flyer and a lack of information, an incident at GWARbar last month resulted in multiple arrests, as well as conflicting reports of what actually occurred. RVA Mag attempts to get to the bottom of this.

The night of Thursday, August 20, tensions in Jackson Ward were high as the neighborhood anticipated a gathering at GWARbar, the local punk rock bar affiliated with legendary Richmond band GWAR.

Before Thursday night, a flyer had circulated in the neighborhood calling for a gathering for “autonomous action” at the GWARbar parking lot. By the end of the night, the parking lot was the scene of a violent encounter between RPD and a small group of peaceful protesters, according to a source connected to GWARbar who prefers to remain anonymous. The incident resulted in two arrests of protesters who were charged with conspiracy to incite a riot and assault on a law enforcement officer, according to reports by WTVR.

The purpose of the flier and the gathering is still unclear to the residents of Jackson Ward, said Michael Derks, the owner of GWARbar, in a statement. Derks said that despite calls of concern from the neighborhood and a request made by the district’s City Councilperson, Kim Gray, for GWARbar to put up a “no trespassing” sign, he decided to open the bar for the night.

“I made the decision to keep the bar open partly because I did not believe that we were in danger,” Derks said in his statement. “But also because if I was wrong, an open establishment with happy patrons is a much less inviting target for vandals than a shuttered building with threatening signs.”

If protesters did gather in the bar’s parking lot, Derks said he had planned to mediate between protestors and RPD and explain that they were there with his permission. In his statement, Derks said that he hoped “to be the voice of reason between the police and protesters.” He didn’t want the situation to escalate like other incidents where protesters were arrested for no reason, he said.

The expectation of violence, trespassing and vandalism led to a tension-filled start to Thursday night, according to the anonymous source. They walked around GWARbar’s block at around 9:30 pm to see if people were gathering in the parking lot, where the flier had specified participants were to meet. They said at that time there was no one in the lot.

The anonymous source said they, like others in the community who are regulars at GWARbar, decided to be at the bar to keep an eye on the event in case it got out of hand. When they arrived at GWARbar a little before 10 pm, they said there were less than 15 people gathered in the parking lot.

“We were just like, ‘We’re not going to let anyone mess up an actual neighborhood, community bar,’” they said. “A lot of us showed up to make sure we had the business’ back.”

The police arrived and blocked the parking lot with cars between 10:15 and 10:20 pm, the anonymous source said. Immediately, they said, the officers acted against the protesters. A video taken by our source, timestamped at 10:21 pm, shows officers calling for IDs and forcefully arresting two protesters when the crowd refused to comply. Multiple protesters were physically shoved to the pavement of the parking lot by the police, the video showed. (The incident was captured in several videos later shared on RVA Mag’s Instagram account, linked here: 1, 2, 3, 4)

The video shared with us by the anonymous source showed that Derks stepped out of the bar at 10:22 pm and alerted RPD that the parking lot was his private property and the protesters weren’t trespassing. Despite this action, the police continued to detain the two arrested protesters and remained in front of GWARbar until 11:53 pm, the anonymous source said. Unmarked vans and armored cars continued to make laps around the block after the officers left the scene.

Derks said that he understood the concerns of the people who called to warn the bar and of Gray, who he said believed that the protest may have been planned to target her home in Jackson Ward. The anonymous source said they believed that allegations of protesters targeting Gray’s house were falsely reported by the police and the media, and that targeting had never happened.

“I understand how Ms. Gray feels betrayed by my decision not to close my restaurant but I can not know what people do when they are not at my establishment,” Derks said in the statement. “I can only influence what they do when they are there, and I will not allow people to be discriminated against while they are here, whether it be for the color of their skin, their sexual orientation, or even the way they dress.”

The anonymous source also contradicted reports by ABC 8 News of the number of protesters that gathered in GWARbar’s parking lot.

The anonymous source who spoke to RVA Magazine said there were no more than 20 protesters in the parking lot of GWARbar throughout the night.

Jarvis told ABC 8 News he was shoved to the ground by an officer when he began recording the interaction on his phone.

The anonymous source said that they didn’t understand why GWARbar was targeted, because it is well regarded by the Jackson Ward community as a true example of a neighborhood dive bar. They said it has always been a safe space for its workers and patrons.

Derks said he was conflicted about his place as a business owner in the ongoing conflict between protesters and police brutality.

“As a business owner I have struggled to stay neutral as the world goes insane around me,” Derks said in his statement. “It is not GWARbar’s place to choose a side in the heated discourse that is ripping at the very fabric of our society, but last night I was reluctantly thrust onto the frontline of these struggles.”

Jamie McEachin is a junior at James Madison University where she’s majoring in media arts and design with a concentration in journalism, and minoring in political communications. Jamie believes that knowledge is power, and she wants to empower readers with the stories she writes. She loves any excuse to add to her plant collection.