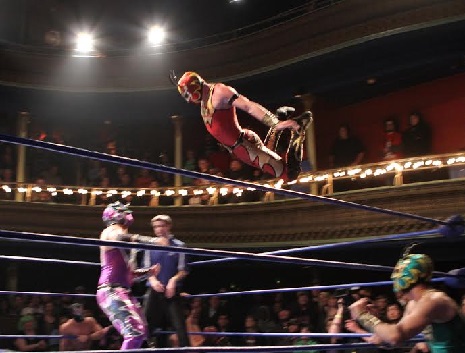 “Do you like movies about superheroes? Playing video games? Do you enjoy great drama and acrobatics? If so, you need not be a wrestling fan to enjoy the flavor of pro-wrestling we make.

“Do you like movies about superheroes? Playing video games? Do you enjoy great drama and acrobatics? If so, you need not be a wrestling fan to enjoy the flavor of pro-wrestling we make. We’re not chocolate or vanilla. We’re that wacky blue barrel down at the far end of the freezer. You know you want to try.”

This was the promotional spiel CHIKARA‘s Director Of Fun Mike Quackenbush rattled off as we discussed the truly unique wrestling company’s return to Virginia this Sunday and it perfectly sums up just what makes CHIKARA tick as well as why it’s so beloved. 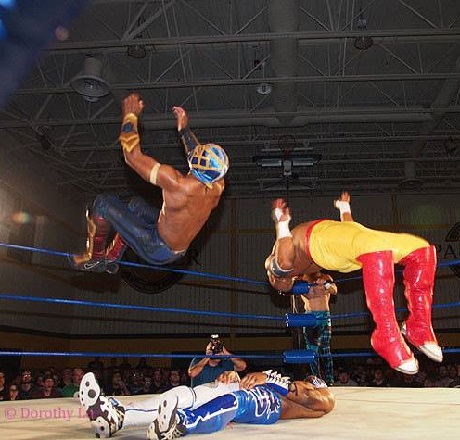 Since 2002, this Philadelphia based wrestling company has been putting on the most original product in the wrestling business as it celebrates the impressive athleticism of wrestling while also embracing the campiness that can often be derided in normal settings. Richmond got a big taste of the company’s antics last October as they put on their stunning Moonraker event which we immensely enjoyed. Just watching this comedy highlight reel of their eight man tag match from that night is still enough to bring tears to our eyes.

This Sunday though, CHIKARA will return to Virginia in Norfolk with The Marta Complex, the 23rd installment in their 15th Season currently underway. This is a truly can’t miss show for wrestling fans and people just looking for wholesome entertainment. That’s not hyperbole either – it’s actually a “can’t miss” show because this Sunday’s show will actually be the last time CHIKARA runs Virginia.

“The strict nature of the Virginia Athletic Commission makes it extremely prohibitive,” explained Quackenbush. “If you want to see us, this is the weekend to do it.”

It’s not the first time wrestling fans will have heard of the Virginia Department Of Professional And Occupational Regulation effectively forcing out a wrestling promotion and the sad reality is that it won’t be the last time. But Quackenbush didn’t spend too much time harping on the harsh reality. Instead, he spent his time gushing about the upcoming show and giving us a great look at just what goes into CHIKARA. 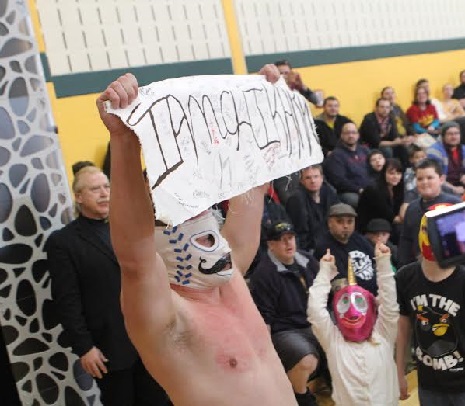 While regarded as the mastermind behind CHIKARA and its sustained popularity over the years, Quackenbush is no stranger to the ring himself. He enjoyed a fruitful career starting in 1994 where he built a reputation as one of the business’ most technically gifted performers while notching accolade after accolade, most notably holding the NWA World Junior Heavyweight Championship for over three years. In 2013, Quackenbush decided to retire from performing inside the squared circle and while most wrestlers start to go nuts mere weeks after hanging up their boots, Quackenbush seems to be content in stepping out of the spotlight.

“I think if I wasn’t so busy minding every other corner of a wrestling universe, I’d be a little stir crazy. But my body is relieved. There are 3 active professional wrestlers in the world that, if one rang me up and asked me to share the ring with them again, I would be hard-pressed to decline. That call hasn’t come. I still train wrestlers a few days a week, which helps keep the itch at bay.”

It might sound funny to hear Quackenbush describe being busy with a “wrestling universe,” but that’s just what CHIKARA is: a constantly evolving story with its own deep mythology that’s only gotten more complex as the years have gone on. “I could write you a book,” he quickly stated when asked about creating and maintaining the mythology. “You won’t want it when it’s done, but I could write you a book.” 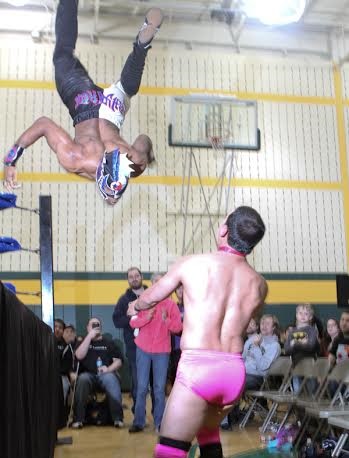 The mythology of CHIKARA plays out in “seasons” that run yearly. While it’s a concept other wrestling promotions flirt with, no one tackles it with the dedication and aplomb that CHIKARA has done for years now. It includes anything from the secret teachings of a wrestling move to a mystical amulet with mind-controlling powers. It’s never enough that a causal fan can’t understand what’s going on, but fans that have been with the company for years are constantly rewarded with new twists and turns or the return of story elements thought to be long discarded. For CHIKARA, the most arcane elements of the characters, storylines, and even matches often become vital parts of comprehensive story arcs later and the beauty of it is that it perfectly works every time.

“A lot of advance planning goes into our seasons. You can never be ready for injuries or leaves of absence (people get sick! people have babies!) but the beginning, middle and end is clearly mapped before we play Note One for our audience. A lot of time, energy and love goes into the crafting of each season or multi-season arc.”

In addition to the intricate mythology, CHIKARA also gives fans another reason to obsess over each new chapter: Easter Eggs. Since the very beginning, CHIKARA has been known for their obscure references to comic books, films, science fiction, and of course, wrestling in general. Just like any Marvel movie, there are plenty of obvious ones that everyone seemingly picks up on, but for each obvious one, there’s probably a dozen more hiding under the surface that CHIKARA’s loyal fans meticulously hunt for.

“For a while, we had some very studious, trivia-minded fans that were expert at finding every little Easter Egg we dropped into the narratives. They would just pick right up on it. Every once and again we sneak one past them, but we’ve cultivated a fan base that prowls every corner in search of them. It’s rare one goes unnoticed.”

It’s ridiculous to think an independent wrestling promotion would excel so brilliantly at having this deep mythology rich with Easter Eggs, but like we said from the start, CHIKARA is completely original in the field of professional wrestling, even down to their merchandising efforts which completely blows away all of their competition except for maybe WWE. But while the big promotion of the wrestling land is more content to put John Cena’s face on everything, CHIKARA’s merchandise is a lot more structured and set up in a way that it enhances the fans’ experience as opposed to just emptying their wallets.

“We’ve dabbled in graphic novels in the past. That’s a fun extension of our physical universe. We recently, just as an experiment, made a few videos called ‘Journey into CHIKARA,’ to see what a TV program might feel like. It was an interesting exercise. Up next for us will be our video game, ‘CHIKARA: Action Arcade Wrestling’ which just got green-lit on Steam.”

CHIKARA’s show this Sunday will be their second (and sadly final) show at The Norfolk Masonic Temple, a venue they jumped to in March for Altar Egos after running the Greater Richmond Convention Center last year. While the show was a success, it’s not surprising to hear just why CHIKARA made the jump from the Convention Center to the more relaxed Masonic Temple.

“The Masonic Temple in Norfolk is a warm, intimate venue. It suits us much better than the giant convention center we played in Richmond. That convention center, to draw an analogy, is like Queen Live at Wembley Stadium. In Norfolk, we are Clapton’s Unplugged album. That’s how we roll.”

Running a show with an “unplugged” is almost routine for CHIKARA in their stomping grounds of Philadelphia now, but it’s been great to see CHIKARA branching out more and more, especially with this season that sees them travelling from Minnesota all the way to the United Kingdom. Again, it’s atypical of an Indy promotion and in fact, only two other wrestling companies in the entire country travel more than CHIKARA does month to month. While those other promotions may plan specific matches or plot points or feuds to coincide with their location, CHIKARA relies much more on their established brand as they travel outside of the Northeast, something that only adds to the cohesion of CHIKARA’s final product. 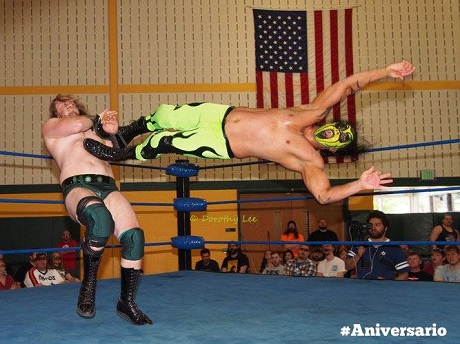 “I think it’s really important to not plan for the differences in audiences, but meet them at the top of the show, and mold the performance around what they give you. It has to be organic in that way. If we ‘planned’ something we thought was right for Norfolk, and we walk out and find that isn’t the audience’s vibe at all, we’d be set up to fail. All too often I think, the value of being good improvisers in the ring goes overlooked.”

The value of a good improviser will be on full effect at CHIKARA’s show this Sunday and if you’re smart, you won’t miss an afternoon of hilarious hijinks and impressive agility. There’s absolutely nothing in this world quite like a CHIKARA event and this Sunday is your last chance to catch it within the comfortable confines of our state borders.

Wrestling fan or not, it’s a great way to spend your weekend afternoon and just think about that watercooler talk come Monday. Instead of some boring story about a football game, regale your office mates with stories of Ice Cream clad wrestlers battling giant sized Ants while a yacht enthusiast cheers them on. That’s not even half of what you’ll get this Sunday at CHIKARA’s The Marta Complex so start planning your trip to Norfolk now, people. We know we will!

CHIKARA’s latest chapter, The Marta Complex, arrives in Virginia this Sunday at The Norfolk Masonic Temple. For more information on the show and where to buy tickets, click here.