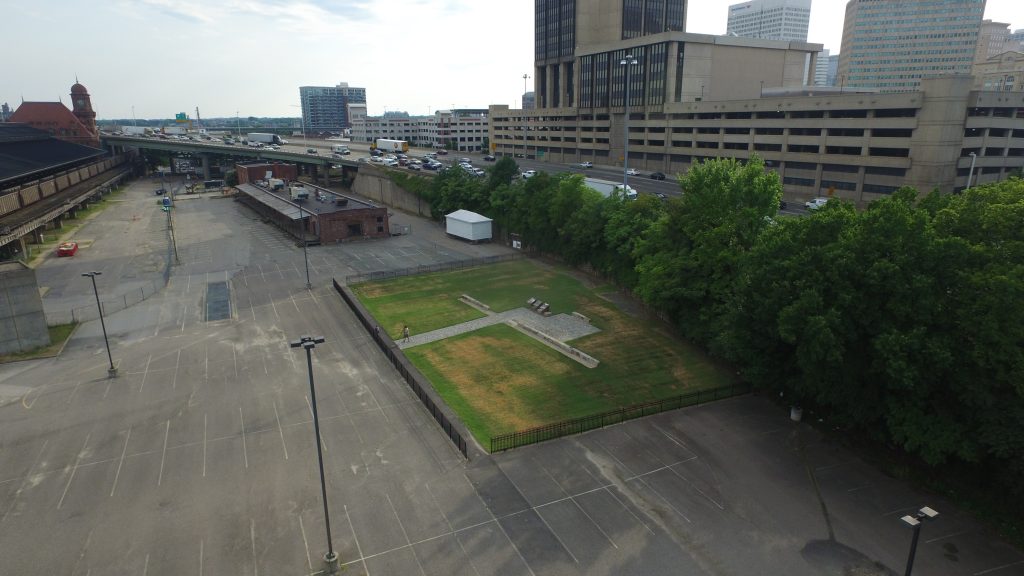 The seventh installment in a monthly series in which a hometown Richmonder who has spent over a decade abroad explores the many different neighborhoods accessible by GRTC bus lines to discover the ways transit connects us all.

The vacant storefronts scattered throughout and the empty parking lots that encompass entire city blocks belie the Shockoe Bottom of two centuries ago, when this neighborhood was the heart of Richmond’s economy.  Tobacco Row ⁠⁠— today a stretch of nearly waterfront condos and apartments ⁠— got its name from the long line of buildings that warehoused Virginia’s most valuable export.

This patch of Richmond was shaped just as profoundly by our country’s most profitable import: enslaved Africans. Tucked away behind Main Street Station on the far side of an endless asphalt expanse lies the Devil’s Half Acre. Just three blocks from Virginia’s capital, this rectangular patch of greenspace once hosted the largest slave holding facility in the Commonwealth: Lumpkin’s Slave Jail.

Over 350,000 people were sold into slavery in Shockoe Bottom between 1830 and 1865, making Richmond the second-largest slave trading center in the United States. Besides some meager markers and an online Slave Trail map, precious little has been done to commemorate this part of our history. The only efforts to educate Richmonders about this dark chapter in our city’s history come from civil society groups such as the Elegba Folklore Society, who offer interactive tours.

Shockoe Bottom survived the Civil War and its torching at the hands of the fleeing Confederates, but what such a bustling urban neighborhood couldn’t overcome was the advent of the private automobile. Starting in the 1920s, the area began to sink into a state of disrepair. The 1950s brought the clearing of entire city blocks of historic homes and warehouses in favor of the hideous parking lots that plague the area to this day.

Only in the last two decades of the twentieth century did Shockoe Bottom begin to bounce back as a vibrant urban neighborhood, in fits and starts. A fledgling art scene anchored by (the original location of) 1708 Gallery, the completion of the Canal Walk, and the end of periodic flooding (save Hurricane Gaston in 2004) thanks to the James River Flood Wall planted the seeds of today’s growth.

Three large projects have transformed the fabric of Shockoe Bottom, helping to reverse decades of neglect. The Virginia Capital Trail, the redesigned 17th Street Farmers’ Market, and the Pulse BRT station all signal that Shockoe is once again embracing its roots as a city neighborhood built for people, not cars. Whether the area can not only confront its contributions to America’s “peculiar institution” but harness this dark history to attract curious visitors remains to be seen.

At the corner of 23rd and Franklin lies the only stop in Shockoe Bottom along GRTC’s Route 4. Imagine your correspondent’s consternation when he saw that the stop was “closed due to filming.” Despite the lack of a camera crew anywhere in sight, the buses were now picking up passengers around the corner.

This singular stop marks the only point at which Routes 4A and 4B overlap.  4A leaves Shockoe Bottom to loop around Montrose Heights, while the 4B takes a more southerly route to Fulton and back. No other route in GRTC’s entire system operates in this manner, where the variations are essentially entirely separate bus lines. This distinction can prove confusing.

After accidentally boarding the 4A with new GRTC Transit Advisory Group Vice Chair Adam Lockett, our bus embarked on its eastward journey towards Montrose Heights — speeding along, as the route lacks a single stop along Main Street by the many apartments or beloved businesses, such as Millie’s Diner and Poe’s Pub. If you head eastbound on the 4B you’ll hit another spot lacking connectivity; there are no stops along Main Street, forcing people to walk up the hill towards Shockoe from the Riverfront Pulse stop in order to catch the 4.

Before the Great Richmond Reroute last year, Greater Fulton was served every fifteen minutes by the 6 bus, which ran down Broad Street all the way to Willow Lawn. After the redesign, the replacement route⁠ — the 4 ⁠— was dropped to 30-minute frequencies. The redesign also shifted Fulton’s access to GRTC from an arterial (a route that runs crosstown) to a circulator (one that loops around a neighborhood collecting people to bring to a more frequent route).

Exactly this combination of changes triggered community activist Omari Al-Qadaffi to file a federal civil rights complaint against GRTC. In a filing with the Federal Transit Agency, he asserts that the redesign unduly burdens low-income and minority bus riders. GRTC’s attempt to use savings from the Fulton cuts to expand service in the more affluent West End, at the behest of Councilwoman Kim Gray, compounded this perception of inequity. Such moves have damaged the trust of a community that already felt cut off after a mooted Pulse stop in the neighborhood was eliminated in favor of a stop serving the conglomeration of condos known as Rockett’s Landing.

For those who make the same mistake as your correspondent, thankfully the 4A and 4B come tantalizingly close to overlapping the further east you go. Alighting from one of the system’s older diesel buses (they still have the blue lights inside), it took but a short walk down a wooded stretch of Government Road to reach the heart of Fulton.

Sixty years ago, residents of this part of Richmond used to draw a sharp distinction between Fulton Bottom and Fulton Hill. Today, no matter which you search, all that comes up is Fulton, due to the area’s dark history of displacement.

In the 1970s, Fulton Bottom was deemed a slum by city government and targeted for “urban renewal.” Revisionist history wants you to believe that severe flooding in the early years of that decade made what was an already unsavory neighborhood absolutely uninhabitable. The narrative goes on that residents took payouts from the Uniform Relocation Assistance and Real Property Acquisition Act (1970), and gladly moved.

In actuality, by the 1960s, Fulton Bottom had become an oasis of affordable housing for the Black working class. When the plans to demolish the Bottom became clear, residents were resistant. The compulsory nature of the evictions, and subsequent razing of the Bottom, came with a promise of better housing for Fulton’s residents in the near future. After the city converted much of the former neighborhood into Gillies Creek Park and dragged its feet on the promised new construction for over a decade, Fulton Bottom’s former residents gave up all hope of seeing their community restored.

The loss of a neighborhood also led to the loss of a local culture, history, and sense of place. To preserve the stories and personalities that made Fulton Bottom so unique, in 2011, Virginia LISC, The Valentine, and the Neighborhood Resource Center of Greater Fulton came together to create the Historic Fulton Oral History Project. The interviews of nearly a dozen former community members can today be streamed online or found as a physical copy at ten sites across the city.

Over the past 30 years, Fulton Bottom has once again filled up with housing. Instead of the dense, walkable community of row houses and corner shops that resembled Shockoe Bottom, today the area is devoid of personality and looks like any subdivision in Chesterfield or Henrico. Fulton Hill, on the other hand, still effuses the character of an urban neighborhood⁠ — albeit one that feels far enough away from Richmond’s hustle and bustle for residents to still talk of “going into the city” when they drive downtown.

There’s also plenty for the rest of the region to discover in Fulton. Flush on the Henrico border lies Richmond National Cemetery, a nearly 10-acre site where close to 10,000 Union Soldiers who died in the siege of the Confederate capital are majestically interned under marble headstones. Beer enthusiasts can delight in the spacious eastern outpost of Triple Crossing Beer. The outdoor patio will leave you feeling like you’re no longer in the city at all. Those looking for a bargain should head to Fulton’s oldest eatery: Krispies’ Fried Chicken. Where else in Richmond can you get a two-piece snack for just $3.39?

Surrounding such sites and amenities, the federal row houses, Sears catalog homes, and low-slung bungalows of Fulton Hill (today the only Fulton left) serve a similar purpose to the housing that was bulldozed in the bottom half a century ago. Although Fulton remains predominantly Black, working class residents of all races have begun to move in. As the prices of single-family homes in Church Hill, Blackwell, and Northside rise beyond the reach of the middle class, Fulton still offers historic homes for $150,000 to $200,000. Thanks to the likes of local musical talents Trapcry and Alabama Thunderpussy, the neighborhood increasingly has a reputation as a haven for creatives.

Over the past century, both Shockoe Bottom and Fulton have proven themselves to be urban neighborhoods as vibrant as they are resilient.  Unfortunately, those thriving elements of the two communities have taken root not thanks to the City’s policies but rather in spite of them.  The experiences of Shockoe Bottom and Fulton should serve as a warning to Richmond’s leaders who think the best of our city can only be realized through grand plans.  What makes these two neighborhoods and the whole of the River City a delight to call home are its people.

Photos via Wikipedia, the Valentine archives, and Venture RVA, unless otherwise noted

Here's our comprehensive A-to-Z list of everything great that's happening around town on New Year's Eve, to help you say goodbye to the... READ MORE

Here's our comprehensive A-to-Z list of everything great that's happening around town on New Year's Eve, to help you say goodbye to the... READ MORE