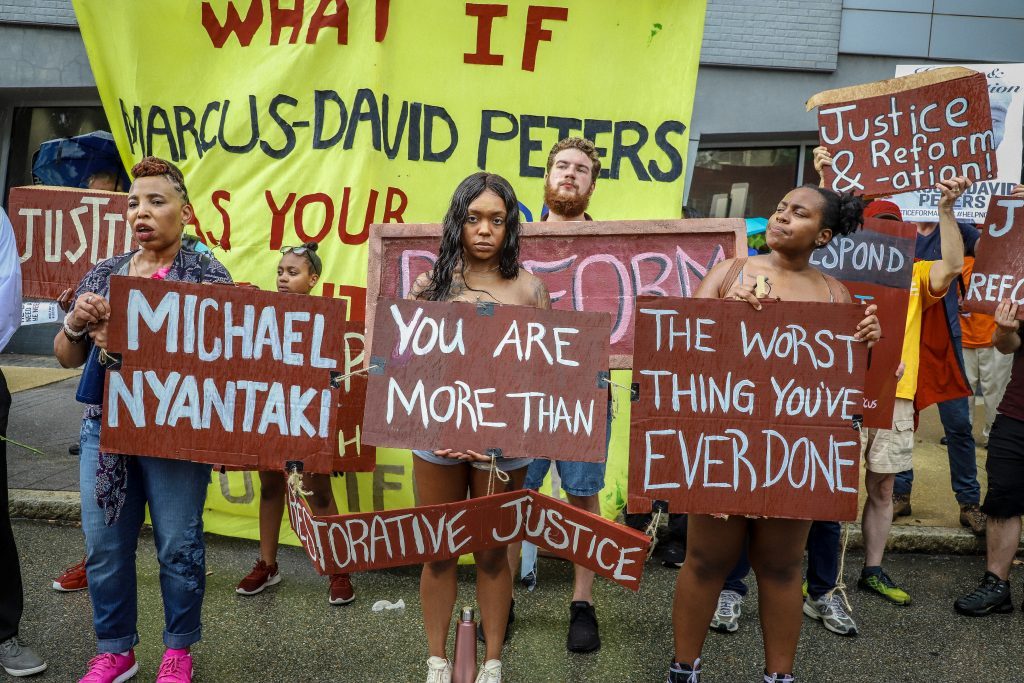 It’s been one year since Marcus-David Peters became the first Richmonder turned into a hashtag after he was shot to death by a Richmond police officer. #marcusdavidpeters. Yet, in a city where the word “equity” was present in every budget conversation over the past month, Richmond has yet to use this same language in reforming our community policing. In a city where we can admit that we have racial inequities within education, transit, housing, and health, admitting that our police department is also in need of a transformation seems to be painfully impossible for city officials.

Since before the death of #MarcusDavidPeters, the Richmond Transparency Accountability Project (RTAP) has been working to advocate for transparency in police practices in RVA. After New Virginia Majority outreach found that over-policing was a high threat to public safety, RTAP began asking questions about the frequency and nature of arrests in Richmond. After two years of RTAP pushing for the release of this data, RPD released information in March of this year that proved disproportionate rates of Black Richmonders are stopped for so-called field interviews, RPD’s rebrand of stop-and-frisk, validating RTAP’s case for an increase of transparency. Due to the continued community mobilizing for transparency in use-of-force data, RPD has since attempted to maintain their records, and, after a decade, promising to update the date from the current system for public record.

Dr. Liz Coston of RTAP urges the community to question the administration’s decisions about policing our minority-majority city, such as their new contract with Soma Global. “Soma Global markets themselves as being a provider of predictive policing technologies,” said Coston. “They argue that those technologies reduce crime. We know from the implementation of those technologies from other communities that they disproportionately harm black and Hispanic communities.” The Harvard Civil Rights Civil Law Review reports that “Algorithms make predictions by analyzing patterns from an initial data set and then look for those patterns in new data. Police data aren’t collected uniformly, and initial data sets fed into algorithms will reflect institutional racial and income bias.” In a city supposedly committed to racial equity, it’s disturbing that Mayor Stoney would choose such a technology, which will clearly increase the already disproportionate rates of Black Richmonders having to endure police field interviews.

Richmond Police Chief Alfred Durham retired this past December, reflecting on May 14, 2018, “What really took its toll on me this year was the shooting death of Marcus-David Peters.” The ongoing chief selection process has proved less than thoughtful, due to poor advertisement of community-input meetings, less-than-appropriate facilitation within these meetings, and finally, a Police Chief job description that did not, as previously promised, reflect the input from those community meetings.

RTAP’s engagement also put the group in conversation with the Human Resources office to participate in the new RPD Chief selection. RTAP attended all of the gatherings, taking notes in order to monitor the input included in the job description. However, adding insult to injury, the city’s latest move was to rescind RTAP’s invitation to participate in the process of the Chief selection, explained Kim Rolla of Legal Aid Justice Center on the May 8th episode of Race Capitol.

The death of #MarcusDavidPeters brought another intersection to the public safety issue — the Crisis Intervention Training that is provided for Richmond Police. While we as a city dramatically discussed this year’s budget, the question of how RPD is using the funds allocated to maintain the safety of those in a mental health crisis was absent from the conversation. Therefore, we can expect the same self-preservation priority from the department: Officer Safety First and Always.

To truly see the full impact of policing in Richmond, though, we must look even wider when discussing police interventions in the capital city. Within Richmond sits Virginia Commonwealth University, a public research university with the largest campus police force in the Commonwealth. With 99 sworn officers that have the same powers as a Richmond Police officer, VCU Police recently had its jurisdiction expanded into Richmond’s Black communities. In some areas, it will be possible for Richmonders to be patrolled by RPD, VCUPD, and the Capitol Police, according to Ord. No. 2018-336, which shows the approved jurisdiction expansion for VCU Police.

While Dr. Michael Rao, VCU President, boasts in public speeches about the university’s commitment to diversity and equity, and refers to VCU as “the place to achieve the American dream,” police with VCU printed boldly across their uniforms gear up to add to the patrolling of Black Richmond neighborhoods. One year ago, VCU graduate #MarcusDavidPeters was murdered by RPD, and most recently we had an unnamed Richmond Police Officer threaten Albert Hill middle school students (the officer still refuses to publicly apologize). Meanwhile, this is how Richmond leaders such as Dr. Rao and Mayor Stoney take action to uplift and center the communities they claim to represent — by increasing the number of police in those communities.

A student movement called No Policing in Mental Health wants VCU to replace police officers with mental health clinicians when doing wellness checks on students. When VCUPD Chief John Venuti was asked what qualifies the officers to attempt to interact with individuals going through a mental health crisis, he stated that VCUPD utilizes the same Crisis Intervention Training that RPD officers use. Michael Nyantaki, the Richmond officer who shot and killed #MarcusDavidPeters, was also trained in CIT. On May 14, 2018, even after Officer Nyantakyi acknowledged that he was monitoring someone undergoing a crisis, he still proceeded to escalate the interaction, leading to him killing #MarcusDavidPeters.

When RPD Chief Durham referred to CIT, he stated, “We give 40 hours, and people expect us to get it right,” implying that even he sees the training as inadequate for his team. After the shooting of #MarcusDavidPeters, local community organizers were promised a meeting with Mayor Stoney and Chief Durham about crisis approaches with Richmonders. A year later, this meeting has yet to happen. Whether or not you agree with the RPD’s justification of the shooting, we should all acknowledge that CIT failed that day. And as a city, we should focus on the urgency of getting it right.

In the last month, RVA City Council has heard several examples of the way Richmond loves to speak in terms of “equity” for the city, so I feel it’s important to define what seems to be the word of our time. According to Race Forward, “Equity means fairness and justice, and focuses on outcomes that are most appropriate for a given group, recognizing different challenges, needs, and histories. It is distinct from diversity, which can simply mean variety (the presence of individuals with various identities). It is also not equality, or “same treatment,” which doesn’t take differing needs or disparate outcomes into account. Systemic equity involves a robust system and dynamic process consciously designed to create, support, and sustain social justice. See Racial Justice.”

Yet when it comes to policing, our Richmond City Council and City Administration are silently violent, neglecting to apply the same equitable lens many of the individuals involved claim to champion. So let’s take the advice of Race Forward and also refer to the definition of Racial Justice: “The systematic fair treatment of people of all races, resulting in equitable opportunities and outcomes for all. Racial justice — or racial equity — goes beyond “anti-racism.” It is not just the absence of discrimination and inequities, but also the presence of deliberate systems and supports to achieve and sustain racial equity through proactive and preventative measures.”

Preventative measure require deliberate behavior. In the former capital of the confederacy, still a minority-majority city, resisting police transparency is simply an act of denying the racial inequities. The city acknowledges that living in Westover Hills neighborhood predicts a Richmonder lives 20 years longer on average than a Richmonder living in Gilpin Court. Imagine what this same map would show about rates of entry into the criminal justice system. What does over-policing do to a Richmonder’s life expectancy when it is already the lowest in the city? Rather than avoiding the uncomfortable conversation of a community-informed RPD system transformation, we should commit to focusing on removing the white hood of Richmond’s past for an equitable lens into our future.