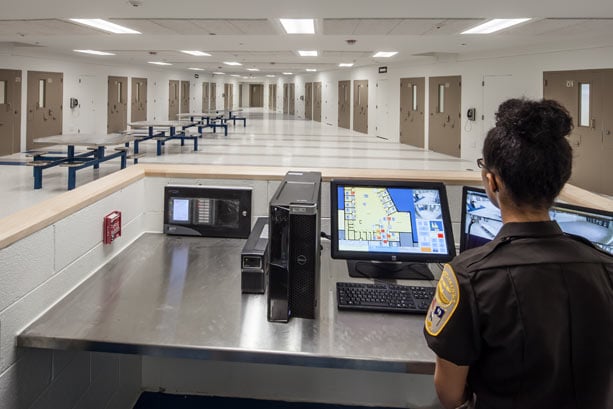 In the Richmond City Jail, COVID safety protocols look a lot like torture.

If anyone doubts how little the City of Richmond values the emotional well-being of incarcerated people, they should look no further than the Richmond City Jail’s harsh (and unacknowledged) quarantine measures. Over the course of five months, from June through October, Theresa Young spent a total of two and a half months locked for 23 hours per day inside a small cell. She was not put in isolation because she had done something wrong. (In fact, she says, staff recognized her as cooperative and dependable, asking her to clean as a volunteer.) Nor was her confinement an anomaly or a violation of jail policy. Young’s torturous months of medical isolation were simply incarceration-as-usual in RCJC during the era of COVID-19.

Even more than some other jails in the area, RCJC has been aggressive in using solitary isolation to combat the coronavirus. Though numerous lawyers, activists, and incarcerated people confirm that RCJC’s stated “two-week quarantine” policy means two weeks of emotionally trying and legally inconvenient isolation, the Richmond City Sheriff’s Office (RCSO), which runs the Richmond jail, has failed to publicly acknowledge the details of its quarantine procedures. This failure — perhaps a success in the minds of some — has effectively obscured from judges, prosecutors, medical officials and the public the profound callousness that underlies the jail’s response to COVID-19.

“It’s hard for us as advocates,” Young’s lawyer, Lauren Whitley said. “Our clients are telling us things, and we have no reason not to believe our clients, and then nobody will verify it. It’s this weird form of gaslighting.”

The psychological risk of isolation

Over the course of her life, Theresa Young has been diagnosed with both paranoid schizophrenia and bipolar depression. She suffers from claustrophobia and has a history of childhood trauma. Not surprisingly, she described her time in medical isolation as a painful, retraumatizing experience. “I’m one of those that can’t be confined in one spot. I even kind of flip out when I’m in an elevator,” Young said. “This has been the roughest time being locked up.”

Young first entered solitary confinement in June after a court appearance in Henrico. Unlike some other local and regional jails, RCJC requires that all incarcerated people returning from court spend roughly two weeks in a quarantine pod. According to Young, she has been in solitary medical isolation for 15 days on three occasions, twice after returning from court; and for a full month on another. All of these confinement periods meet the UN criteria for torture.

“Just being in isolation is a horrible experience,” said Yohance Whitaker, an organizer with the Legal Aid Justice Center, who works with incarcerated individuals. “It’s taxing psychologically and emotionally and physically.”

During her periods of solitary confinement, Young struggled to keep in contact with her four-year-old daughter. “It’s not like being in isolation you can be on the phone whenever you want,” Young said. “When you’re on the fifteen days, you only come out for an hour, or half an hour. You have to choose if you want to be on the phone, shower, [or] do whatever on the time out.”

RCJC requires all defendants who choose to appear in person to undergo a two-week lockdown after returning to the jail, despite the fact that they appear dressed from head-to-toe in Tyvek coveralls. As a result, Young and many like her must weigh the trying, potentially traumatizing experience of solitary against the probable legal cost of appearing before the judge on a video monitor, dressed in jail clothes. As one might expect, studies show that judges tend to be less sympathetic to defendants who attend trial remotely.

“There’s something to be said for looking someone in the face when you’re going to lock them up or sentence them to imprisonment,” said Richmond’s Head Public Defender, Tracy Paner. “When they are not present in the courtroom, when they’re just a fuzzy image on a screen, the sentencing is harsher; the bond decisions are less favorable.”

In October Paner told RVA Mag that, fearing isolation, none of her clients have chosen to appear in court since the policy began. “Folks who have mental health issues, pre-existing, suffer particular harm when they’re placed in isolation,” she said. “So I have folks who are like, ‘Ms. Paner, I can’t, I just can’t do it.’ I encourage them but I respect their wishes. I don’t want to hurt my clients.”

Although RCJC’s use of isolation in quarantine is common knowledge among defense lawyers, activists, and people incarcerated in RCJC, the Sheriff’s Department has yet to acknowledge the jail’s widespread use of medical solitary confinement. An RCJC spokesperson ignored RVA Mag’s question and follow-up email regarding the use of solitary in medical quarantine, and both Richmond Commonwealth’s Attorney (CA) Colette McEachin and Danny Avula, Director of the Richmond City Health District — the top officials at two public entities that work closely with the jail to coordinate a pandemic response — told RVA Mag they were unaware that RCJC’s medical quarantine involved long periods of solitary confinement.

“I think one of the challenges of this work is that nobody has a sightline into what’s happening there,” Avula told RVA Mag.

For her part, CA McEachin was skeptical of claims that individuals in quarantine were kept in solitary. “I don’t believe people are actually locked in a cell for 23 hours,” she said. “Obviously, I don’t want anybody punished or treated in an unhealthy, non-judicial way so, yes, it would be concerning if I thought that people were literally being locked in a cell with no opportunity to stretch or walk around for 23 hours a day. If there is no other way to do two things at the same time — which is to keep people in the jail until the court releases them, and keep those people who are in the jail in a socially distant, hygienic manner — and this is the best the sheriff can come up with, that may be the best that she can come up with. But I literally don’t know.”

Young’s lawyer, Lauren Whitley, said what most frustrates her is the misinformation or lack of information about what is happening inside the jail. Although RCJC is currently reporting zero COVID cases, after a large outbreak in September, Sheriff Irving has not been transparent about whether widespread testing has continued inside the jail. The result, according to Whitley, is that prosecutors and judges assume the jail is a safe environment, when that may not actually be true.

“You go in front of a judge, you want to advocate for your client credibly, and effectively, but we can’t do that,” Whitley said, “because there’s no information, or just blanket statements that seem inconsistent with our client’s experiences.”

Henry Clayton Wickham is a Richmond native and graduate of the Zell Writers Program. He is a recipient of a Hopwood Graduate Short Fiction Award and the Andrea Beauchamp Prize; he recently completed a Nicholas Delbanco Residency through the Fine Arts Work Center. He teaches writing at The University of Michigan.

At VCU, adjunct professors make up as many as half of total instructors in some departments. Now they are campaigning to receive a living... READ MORE

The Future Is Equal: A Call For Action & Advocacy

On International Women's Day, Rachel Scott Everett and Altimese Nichole point out the importance of acting to create the racial and gender... READ MORE

The twelfth and final installment in a monthly series in which a hometown Richmonder who has spent over a decade abroad explores the many... READ MORE

At VCU, adjunct professors make up as many as half of total instructors in some departments. Now they are campaigning to receive a living... READ MORE

The Future Is Equal: A Call For Action & Advocacy

On International Women's Day, Rachel Scott Everett and Altimese Nichole point out the importance of acting to create the racial and gender... READ MORE

The twelfth and final installment in a monthly series in which a hometown Richmonder who has spent over a decade abroad explores the many... READ MORE