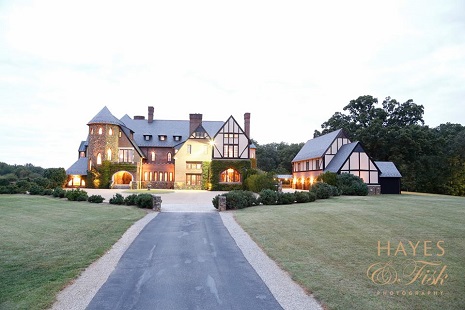 Like oysters? Like craft beer? Love big, fancy houses to slurp your oysters and drink your beer in? Of course you do.

Like oysters? Like craft beer? Love big, fancy houses to slurp your oysters and drink your beer in? Of course you do. Dover Hall, a private estate in Goochland County known for its weddings and other events, is throwing its first Oyster Festival this Sunday and it will feature seafood, fried chicken, craft beer live music and yard games.

Brittany Glines and Jennifer McBride, event producers for Dover Hall have been planning the festival for about six months.

“The catering is from Arnest Seafood’s, they’re near Tappahannock, they’re going to be doing their famous fried chicken and raw oysters, we’re going to have professional shuckers on site for that,” Glines said.

Glines said the festival will also feature yard games such as cornhole and Jenga and live music from Adrian Duke Jazztet.

And for you craft beer and wine lovers, Dover Hall has a couple options planned for you.

Glines said there will be four wines for attendees to sample including Trump winery’s Sparkling Rose and Blanc de Blanc. The festival will offer Barboursville winery’s Pinot Grigio and Octagon wines as well.

The venue usually ties each of their events to a charity, and for the oyster festival they chose World Pediatric Project, a non-profit that provides tertiary diagnostic and surgical care to children in Central America and the Caribbean.

“We wanted to have a sense of community and support our local charities,” Glines said. “I think it’s a great cause.”

For this festival, 10 percent of the proceeds will go toward that charity.

For their birthday party each November, Glines said they always link up with the Goochland Free Clinic and next July, Dover plans to hold a craft beer and barbecue event which will benefit a charity as well.

Dover Hall, which opened in 2013, is a private 33,000 square-foot estate on 55 acres in Manakin-Sabot, which is in Goochland County. The inside has over 30 rooms including a grand ballroom solarium, garden room, library and pub bar. It usually puts on weddings and other special events.

Glines said 80 people have already purchased tickets for the festival and they are expecting 100 to come out for their first round. They hope to make the oyster festival an annual event.

McBride added the event is rain or shine, but if it does rain the event will be moved inside.

Tickets are $75, but if you use the promo code 10OFF you can get them for $65. Tickets for the festival include three drink tickets, the wine tasting and the food.

Dover Hall’s Oyster Festival is this Sunday, September 27 from 12 to 4 pm.