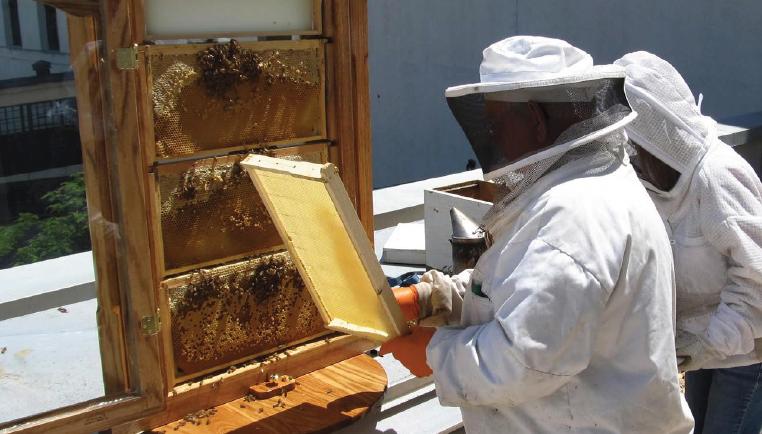 The Secret Life Of Bees: Richmond Beekeepers Association Put The Hive On Display At Science Museum Of Virginia

“See the one with the pollen right there on her legs? She’s shaking and then she’s going to go in a half circle to show how far away it is.” Valerie West, Vice President of Richmond Beekeepers Association, uses a magnifying glass to point out a honey bee performing a waggle dance. The dance is a form of communication between bees in the hive that signifies where to find nectar.

“See the one with the pollen right there on her legs? She’s shaking and then she’s going to go in a half circle to show how far away it is.” Valerie West, Vice President of Richmond Beekeepers Association, uses a magnifying glass to point out a honey bee performing a waggle dance. The dance is a form of communication between bees in the hive that signifies where to find nectar. West and RD Radford, President of the Richmond Beekeepers Association, are both local beekeepers that are volunteering at the new Observational Honeybee Hive at the Science Museum of Virginia.

The Richmond Beekeepers Association, established in 1949, is the oldest beekeeping organization in the area. Partnering with the museum, the group has put together a display that offers a close up look at a working beehive.

The main feature of the exhibit is a large hive, with an outdoor tunnel connected to the cage, allowing visitors to watch while the bees work to find pollen and create honey. Guests can even look for the queen bee–the beekeepers place a green dot on her back to keep track of her within the hive.

The display is a unique opportunity for guests, getting an up close look inside of a working hive is something that not everyone, even beekeepers, get to see according to West.

West became involved in beekeeping four years ago after her husband suggested taking it up as a hobby. They started attending classes together, and soon after she was hooked. “I went to all of the meetings, and I got so fascinated by bees. The more I learned about bees, the more fascinated I became, like when I found out they communicate by dancing. I quit my job; I am a beekeeper now,” said West.

Colony Collapse Disorder, an epidemic that has led to the disappearance of numerous hives throughout the country, is an important topic to both beekeepers. Recently, CCD has gained media attention, but according to Radford the issue stems back to World War II. “When people quit using chemicals to kill people, those companies needed something to do. So they started making pesticides. Which was a good thing at the time,” said Radford.

Today the heavy use of pesticides on farms and home gardens has become an issue. “Honey bees have been around for 25 million years, and haven’t had any problems combating their pests and diseases–up until all of these pesticides and insecticides started be used so widespread. Not making any conclusions, just an observation,” said West.

While the cause for CCD has not been determined, by visiting the exhibit, guests can learn new ways to protect the local bee population. By avoiding pesticides in the garden, opting for natural remedies, and planting bee gardens, the community can provide a safer environment for the bee population.

West also hopes that the exhibit will help educate children on bees. “It should be a permanent display here. Not only to make people more aware of the bees, but [because] they’re fascinating to watch. And if children see them and learn how fascinating they are and watch them, I think they would be less scared of them,” said West.

The exhibit opened on June 1st and will be open to the public for a year, with beekeepers available every Thursday from 10:30-11:30 and Sunday from 1:30-2:30 to answer questions. For more information, visit the Science Museum Of Virginia’s website at smv.org.