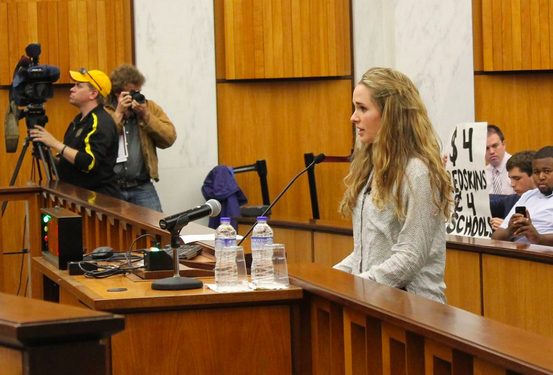 Isabella Arias, a student at Open High School, said what she once thought were poor conditions at Open pale in comparison to other schools.

“I did a little research and I realized what was going on in other public schools. We don’t have rats like Carver does, we don’t have snakes like Armstrong does, and at Open we don’t have black water dripping from the ceiling like Thompson does,” Arias said.

Arias ended her time at the podium by saying, “It’s time for change, we’ve waited long enough,” and was met with applause. City Council President Charles Samuels responded and cited a bunch of increased funding proposals for schools in next year’s budget.

“I want to encourage you all to reach out to your school board. We can’t tell them how to spend money. We can only provide what they have asked for,” Samuels said.

“We, earlier today, made an amendment as all nine (members of City Council), to find an additional $2.8 million for the general fund of the schools. I am so excited you decided to come down.”

After this morning’s protest, Arias and the other protesting students sat down with Mayor Jones, and she said, after their conversation, she felt it was clear “Richmond Public Schools are not a priority, and the city cares more about commercial endeavors than enhancing our educational system.”

Seyla Hossaini is a sophomore at Thomas Jefferson High School, one of the schools in a poor state. She said the crummy conditions aren’t limited to Richmond high schools.

“I also experienced just as many problems at my middle school (Albert Hill). There was an incident where somebody opened a juice box and there was a live cockroach in it. I will never forget that,” Hossaini said.

Emily Knox is a senior at Richmond Community High School, and while she doesn’t experience poor conditions, she feels obligated to help out.

“The condition of the other public schools isn’t fair. Everybody has a right to get a quality education,” said Knox.

“Nothing changed. Things aren’t getting better, if anything they’re getting worse. It’s hard to understand why we can build a stadium when we can’t even have working ceilings and toilet paper in our schools.”

Knox and Hossaini said President Samuels’ response wasn’t much more encouraging than what the Mayor told them this morning.

“The real problem isn’t the school board isn’t giving them money in the right places, it’s that they don’t have enough money for all the public schools. He tried to push the blame onto someone else,” said Knox.

“He ignored us. He kinda brushed her (Arias) aside and said ‘Oh, we can’t do anything about it.’ There’s always something you can do, no matter who you are, if take a stand and really care about something. Especially them being part of the City Council, they obviously some type of power to be able to do something,” Hossaini said.

Knox also said a similar protest happened when she was a sophomore, comprising mostly of adults, but nothing was ever done about the schools’ conditions.

Whether or not the City responds to the students’ requests is hard to tell. They’ve got some momentum behind their cause, and they don’t seem like they’re prepared to step down any time soon.

“Basically, we have a pretty nice school compared to other Richmond schools,” said Sebastian McGuire, another Open High student. “This isn’t just for Open. It’s for all of Richmond to get better schools,”

About 150 Open High students marched from their school in Oregon Hill to City Hall at 9AM this morning to show support for students in other RPS schools who are suffering under unsafe conditions.

Below is information we are recieving as it comes in:

A group of ~8 students just walked in with signs

Media wing is now closed off, has a sign reading “Council and Admin Staff”

Public comment just started but no students have spoken.

Isabella, student at Open started speaking at the stand. “We don’t have snakes in our schools like Armstrong does..after our conversation with the mayor we learned schools are not a priority”

“If Richmond is to be tier 1 city, we have to stop building training camps and baseball stadiums…it’s time for change, we’ve waited long enough” met with applause

Samuels “we can’t tell school boards how to spend their money” cut off by man yelling bullshit, Samuels then threatened to expel him if he interrupts again