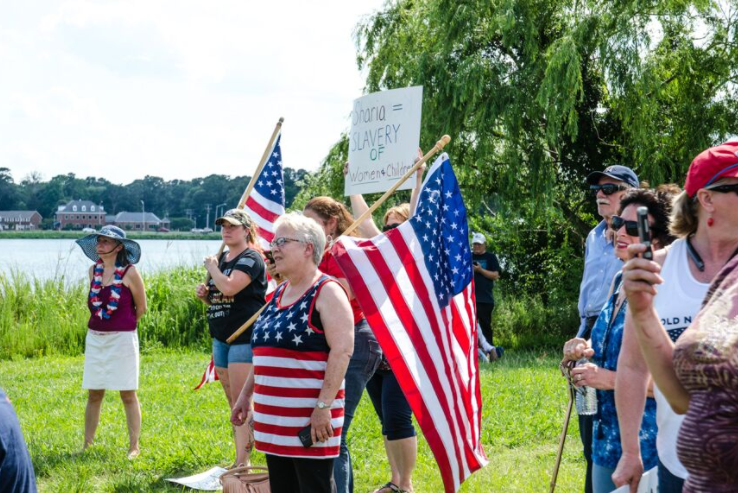 An event hoping to stop Sharia law from taking over the US ended in a parking lot shoving contest and two arrests at Virginia Beach’s Mt. Trashmore this weekend.

Along the bottom of the former-trash dump-turned-community park, about 70 people gathered for a “righteous cause.” Dressed head-to-toe in red, white, and blue and waving American flags, the majority white, Christian, and elderly group held signs and made speeches as protesters cat-called back.

The VA beach event was one of almost two dozen in cities across the nation, all organized by ACT for America! in what was called a “March Against Sharia.”

ACT for America!, an organization founded by Hanah Kahwagi, the alias of Brigitte Gabriel, previously preached that practicing Muslims “cannot be a loyal citizen to the United States of America” because of their faith. The Southern Poverty Law Center, which tracks hate groups in the US, has deemed ACT an anti-Muslim hate group because it has “grown into far and away the largest grassroots anti-Muslim group in America.”

The argument over Sharia Law in the US was thrust into the spotlight by ACT! over the last decade. Sharia is the social and criminal code of law for the faith of Islam. No U.S. court has ever ruled based on Sharia.

Scott Presler, a Northern Virginia native and Virginia Beach resident, organized and led the rally. Presler has been making national headlines for months as an openly gay Republican outspokenly in support of President Donald Trump.

In his address to the crowd, Presler played up patriotism to the military veteran-filled crowd. His call to action included many more points than fighting Sharia, including the enforcement of President Trump’s executive order travel ban targeting Muslim countries which has been struck down by District and federal courts multiple times for being unconstitutional.

At Mt. Trashmore, Presler said it was time to take a stand.

Presler said the group was there to shine a light on Sharia, which is steadily creeping into our society despite it being incompatible with the Constitution and “our way of life.”

Other speakers continued to file through, preaching against radical Islam.

No Muslims from the local community were present. 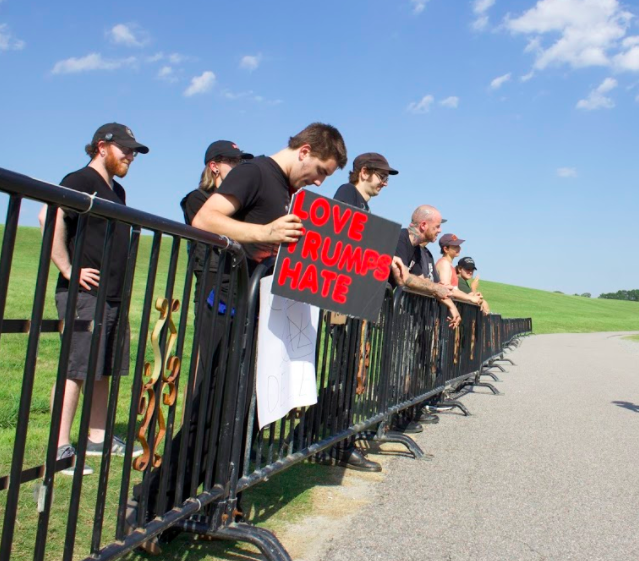 Rumors swirled that there would be no counter-protests at the event, which took place halfway through the Islamic holiday Ramadan.

Members ofVirginia Beach’s Crescent Community Center which serves the local Muslim community, said they knew the rally was happening but decided to stay away that day. Instead, people worked to package meals for local homeless shelters while fasting at the ODU Islamic Center.

But another local, Terry Steel, believed someone needed to stand up against the “March Against Sharia.”

“I just put the word out to some like-minded people with a staunch anti-racist viewpoint,” he said.

The small group, dressed mostly in black, was also composed of mainly white people but decades younger than the crowd they were opposing.

Police officers in neon vests and VA ACLU representatives milled between the yards of land deemed neutral ground as tension built in the barrier between the two groups.

“It’s unacceptable for them to come out here and have a free walk in the park without some pushback,” Steel said. “It’s blatant white nationalism, blatant anti-Muslim rhetoric.”

Another counter protester, Rebecca Winn, said she came out to denounce what she calls a “fake narrative” from ACT!.

“This is where fake news comes from,” she said. “This is a fake narrative. This is a message of fear in order to get people to subscribe to their group or their cause.”

Winn was quick to clarify that she wasn’t against the event’s right to exercise their First Amendment right to free speech, a claim conservative activists have made about the pushback against a radical speech in the US.

“If there is coverage of that, there should be coverage of this,” Winn said about being a counter-protester. “First Amendment, right? We’re all allowed to have our freedom to speak. I respect theirs, I also respect my own.”

She reached her arms out and hoisted her homemade sign reading “stop pretending your racism is patriotism” above her head for the crowd to read. 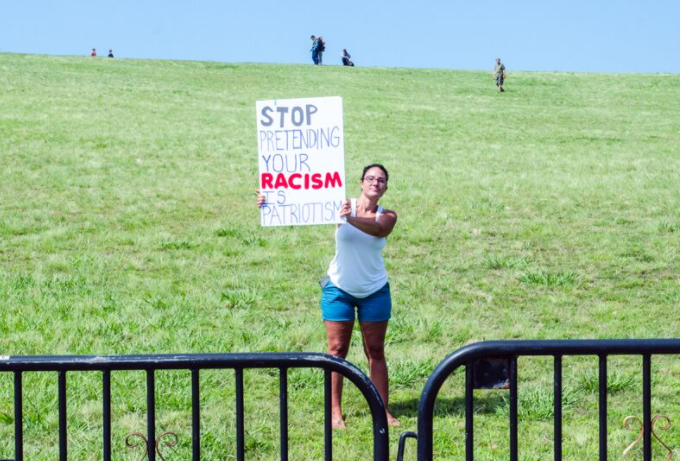 “As a Christian, I want my Muslim friends and neighbors to see people speaking out on their behalf,” she said.

Not so peaceful assembly

After the rally concluded and people were filing out to the parking lot, a few men were yelling and shoving near the counter-protest side. Police officers and cars diffused the situation almost immediately.

Police arrested two counter-protesters, charging them with assault and disorderly conduct. No injuries were reported. No one from the march was arrested.

“It’s always one way and that rhetoric is the same in Virginia Beach,” counter-protester Steel said of how the scuffle broke out. “One of the, we’ll just say gentleman for lack of a better word, was carrying a sign that said ‘stone rape victims’ and the other side said ‘mo’ Muslims, mo’ problems.’”

Virginia Beach wasn’t the only place with counter-protesters and marchers getting physical. Arrests were also made in Denver and Minnesota. Protesters in New York banged pots and pans in an attempt to drown out the anti-Sharia demonstrators.

‘Return their ignorance with kindness.’

Jackson Al Abqari is a practicing Muslim and the Muslim outreach coordinator for the social intelligence company AP Math Labs in Washington D.C.

He said Sharia’s literal meaning is “law of the land” and it lists the laws people are expected to abide by, similar to Judaic and Christian laws.

“This whole kind of right-wing thing about Sharia in America is so ridiculous because Sharia goes by the law of the land,” Al Abqari said. “It’s like that saying, ‘when in Rome.’ The thing is no two Muslim countries have the same exact law either. It’s not like there’s one Muslim Sharia.”

He said he is disappointed in the fear mongering happening, but the Muslim community will not be intimidated by racist thoughts and actions.

“When you talk to some of the ACT supporters, they say Islam is incompatible with America which is ridiculous,” Al Abqari claimed. “One of the founding ideals of the U.S. is that you’re free to practice any religion that you want. I’m disappointed in some of the rhetoric that is going on but the Muslim community is not going to be bullied. They’re not going to be abused by these people.”

He said non-Muslims need to understand their beliefs aren’t that different from the ones Islam holds and Muslims have the same ideals as everyone else, like keeping their family safe and secure and for the United States to be a place of refuge.

“People are going to spew hate but the Quran tells us when people of ignorance attack you, it’s better to forgive them and return their ignorance with kindness,” Al Abqari said. “So we’ll remain steadfast and the Muslim community will be an educated community that takes care of its immediate surroundings and volunteers and does a lot of the good deeds in the community regardless of whether we’re demonized or not or if we’re attacked.”