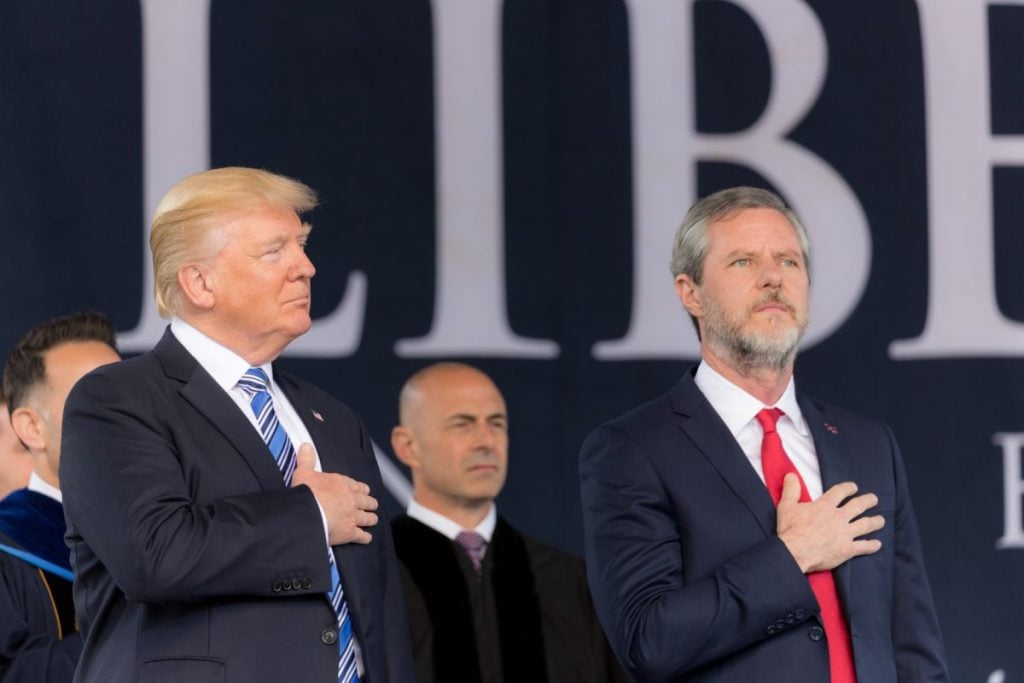 Angered by Liberty University president Jerry Falwell Jr.’s joke about wearing a COVID mask with Governor Ralph Northam’s infamous blackface photo on it, black students and alumni of Liberty are speaking out in condemnation.

On Wednesday, May 28, Jerry Falwell Jr., the president of Liberty University, tweeted that he would only wear a mask amidst the COVID-19 pandemic if it had a photo of a man in KKK robes and a man in blackface on it. His tweet read as follows:

Attached to his tweet was the following mock-up that Falwell Jr. devised:

Falwell Jr. then tried to explain that the photo of his proposed mask depicts the Governor of Virginia, Ralph Northam, from 1984:

Without doubt, Northam’s photo was not and is not excusable. It is as morally reprehensible in 2020 as it was in 1984. But Falwell Jr.’s tweet about the photo demonstrates how not to condemn such reprehensibility.

If Falwell Jr.’s purpose was to remind us of the current injustice surrounding Northam’s lack of accountability for the photograph, some may argue (in the most generous terms possible) that the mask and tweet could be understood as misguided attempts to reckon with the very real presence of anti-blackness in Virginia’s contemporary political climate. However, mobilizing images of racialized violence to taunt a political opponent is not only repugnant, but it resuscitates the racial trauma that such images re-enact.

Already, one LU Online professor has delivered his letter of resignation after Falwell Jr. published his mask idea on Twitter. But in addition to an open letter from black alumni sent to Falwell Jr. and a petition calling for his removal, a number of other black Liberty students and alumni have also spoken out. The following is what they had to say.

In response to Falwell Jr.’s tweet, Tremayne Edwards, a 2013 Liberty graduate, stated: “While blackface is harmful and not okay, promoting a mask with blackface is just as wrong and hurtful.”

Samantha Kelly, who graduated from Liberty in 2011, explained she was “not one bit surprised,” going on to say: “Everything about this is wrong. The governor was all sorts of wrong about that situation but so was Jerry for re-sharing a triggering image and making light of a racist gesture at an especially sensitive time (or any time for that matter).”

Falwell Jr.’s tweet comes in the wake of Ahmaud Arbery’s murder and only two days after the brutal murder of George Floyd at the hands of a group of white cops. For Falwell Jr. to post such an image at any time is utterly shocking. But the insensitivity he demonstrated in posting it this week is thoroughly shameful.

The image of a KKK hood, of course, carries with it a long history of hatred. KKK garb represented and continues to represent white supremacy and white nationalism. The Klan — infamously consisting of police officers, ministers, and government officials — has propagated domestic terrorism for well over 100 years, and is responsible for countless murders of primarily African Americans. The white hood represents racialized terror, violence, and hatred that are all too American.

Blackface, another disgraceful symbol of racism, has a long history of caricaturizing black men and women that draws upon a lengthy cache of racist stereotypes mocking blackness.

Falwell Jr.’s statement that he would wear a mask with men in a KKK hood and blackface is further evidence of his deeply held convictions. As KKK hoods and blackface are, in their own right, masks of sorts, his statement that he would mask his face with such hateful symbols ironically unmasks his bigoted beliefs. His proclamation that he would cover his face with his proposed mask uncovers the racism that motivates him to wear such overt symbols of discrimination in the first place. Indeed, Falwell Jr.’s willingness to veil his face with images saturated in white supremacy unveils the hatred he learned from his father, Jerry Falwell Sr., the founder of the so-called Moral Majority.

In response to the Supreme Court’s 1954 decision to desegregate schools, Falwell Sr. —who was a pastor until his death and whose long track record of racism (and sexism, homophobia, etc.) is unsurprisingly extensive — preached a sermon titled “Segregation or Integration: Which?” He not only argued in front of his congregation that “the true Negro . . . realizes his potential is far better among his own race,” but he went on to explain that integration “will destroy our race eventually.”

Eventually, Falwell Sr. reluctantly integrated his school and his church. Laurie Jacobs-Carneiro, an LU alumnus who first started at Liberty in 1982 and graduated in 1992, explained that she taught Sunday school for Falwell Sr.’s church. However, instead of teaching at the church proper on Sunday mornings, she was segregated from the rest of the congregation and was sent to a literal island off-campus, referred to as “Treasure Island,” “where the church bussed in African American children.”

In 2007, Falwell Jr. took over Liberty, now the world’s largest Christian university, and has been establishing an extensive resumé of bigotry ever since. Falwell Jr. — a zealous supporter of Trump whom he invited to speak on MLK Day in 2016 — also recently hired a reporter who lost her job for a litany of racist remarks. Falwell Jr. has, moreover, a lengthy track record censoring student free speech on campus and muffling of student dissent, in addition to silencing faculty and university employees; university-wide fearmongering; lying; hypocrisy; questionable business deals; making, along with his wife, openly transphobic remarks; running a school that houses a one-on-one conversion therapy program — and a group version thereof — and is home to a rampant culture of homophobia. Most recently, Falwell put Liberty students in danger by keeping his campus open during times of COVID.

As is clear with his recent tweet, Falwell Jr. is becoming increasingly comfortable laying bare his bigoted beliefs, despite his futile claims that he was simply trying to expose racism. Planning to wear his racism not on his sleeve, Falwell instead plans to paste his bigotry on his face for all to see.

In response to Falwell’s mask idea, a rising LU junior who requested to remain anonymous poignantly asks: “If Jerry is concerned about black people and combating racism in America, why hasn’t he spoken about any of the murders that have taken place at the hands of the police this year alone? This month alone? In fact, why does he still support publicly and strongly for Donald Trump when we all know the types of people associated with him: racists. The literal KKK endorsed him when he ran for president. If Jerry is willing to stand by that kind of person, but is also going to bring up Northam’s racism, I smell hypocrisy. And that’s what it is.”

Kelly further explained her utter disappointment in Falwell Jr.: “I’m simply too tired to expect that the leader of the largest Christian university in the world would use his platform to speak out against what’s happening now… Or that at the very least he would simply mourn with those who mourn. It’s a different kind of annoyance for him to think that it would be appropriate to wear (or joke about wearing) that mask… And his clarification of what he meant only goes to show just how lost he is in his privilege… I pray that all of us who claim to be Christians would hold him accountable and call out this stuff. This is what we mean when we say not being racist isn’t enough, but we have to be anti-racist! Call it out for what it is and stop justifying… Own it, apologize, and do better.”

When I asked Kelly if she would agree for her name to be used in this article, she responded in the affirmative, saying: “I want my name to be said while I’m alive.”

The unsettling profundity of Kelly’s courage and desire for her name to be spoken while she is alive gestures toward the countless black lives viciously stolen at the hands of cops and white supremacists. But Kelly wouldn’t have to be so courageous, nor would she desire to have her name said in this way, if it were not for the fact that black women, men, and children are constantly and systemically subject to violence, discrimination, and prejudice for simply being black.

It is the sentiment behind tweets like Jerry Falwell Jr.’s that undergird and perpetuate the anti-black climate in which we live. His now-overtly clear racism speaks of grave insensitivity and willful disregard, which will surely “set a tone for Liberty,” as alumnus Kevin Ray Cohen explained. Cohen, who graduated with two degrees from Liberty, one in 2010 and the other in 2012, stated further that Falwell’s tweet “shows, at it’s very heart, black lives don’t matter.”

It goes without saying, but Falwell Jr. owes an apology to every black student at Liberty and to the greater African American community.

It should also go without saying that he never should have published his tweet in the first place. But what do we really expect from an unrepentant contrarian who benefits from the fundamentalist empire of hatred he inherited from his segregationist father?