More than 7,000 people filled the Richmond Convention Center last night to see former President Barack Obama and Lt. Gov. Ralph Northam at a rally for Northam’s gubernatorial campaign. It is one of two offseason races and viewed as a referendum on President Trump’s national agenda.  It’s also a high-stakes election for the Commonwealth, before the 2021 redistricting, which would be facilitated by a majority Republican legislature should Northam’s GOP opponent Ed Gillespie win the race. 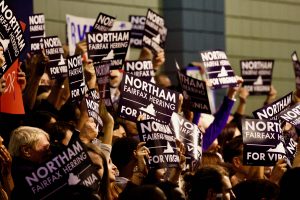 Gillespie, a longtime lobbyist and GOP insider who has never held office, but masterminded the Redistricting Majority Plan (REDMAP), a $30-million campaign that was dissected in Ratf**ked: The True Story Behind the Secret Plan to Steal America’s Democracy. The new book by Salon Editor-in-Chief David Daley, theorizes that Gillespie was part of a successful effort to resist President Obama’s legislative agenda, building a GOP firewall in the House and laying the groundwork for control of the Senate and the presidency of Donald Trump. Strategically, it makes it even more significant that Obama’s visit to Richmond marks the return of the former President to politics.

The rally followed a familiar formula, right down to a soundtrack that included Tom Petty and music one attendee described as “perfect for square dancing.” Local politicians and party officials took turns speaking to the crowd with varying degrees of enthusiasm before statewide candidates rallied the audience with their stump speeches. The intensity of the crowd waxed and waned along with the speakers, culminating in the loudest, most raucous cheers when Northam, the keynote speaker, introduced former President Obama.

Obama ran up the stairs with the characteristic grin and verve that Americans became used to over his eight-year presidency and quickly launched into a positive, high-minded speech that remixed his Yes We Can campaign message with the cautionary tone he’s adopted since President Trump’s victory. He repeated his new slogan “Don’t boo, vote,” speaking to the big concern among Democrats that voter apathy and disillusionment is keeping people from participating in elections. 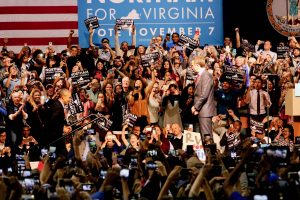 He praised Northam’s policies and personality, highlighting the latter with his military record. “Ralph’s whole life has been about service to others. While he was a cadet at VMI, his fellow cadets elected him president. Even as a young man, they trusted him to do the right thing,” he said. “They held him to a higher standard. Isn’t that what we want in our leaders? Isn’t that what we want in someone we elect? Honesty, integrity, putting others before yourself. That’s the way Ralph has been his whole life.”

He also addressed Gillespie directly on his campaign advertising without saying his name, bringing up the MS-13 ads that sought to tie Northam to the international crime syndicate. Although Gillespie has acknowledged that Virginia has no sanctuary cities, his ad claimed that Northam supported MS-13, and President Trump doubled-down on the claim, alleging that Northam was “fighting for” MS-13. “Ralph’s opponent doesn’t really think highly of Virginia. The fact is that crime and illegal immigration are the lowest that they’ve been in decades,” he said, before claiming that Gillespie was being disingenuous. “He’s using fear to get votes. But that won’t protect kids. It won’t clean up the environment. It won’t protect your health care. Here’s what I know. If you win a campaign by dividing people, you won’t be able to be governor.” 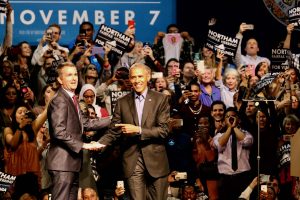 Although redistricting represents one of the most pressing topics for the Democratic Party, President Obama saved this issue until near the end of his 45-minute speech.  “We shouldn’t have politicians deciding our voters, we should have voters deciding our politicians,” he said, invoking a populist tone.

President Obama was preceded by a who’s who of Virginia politics, including Congressmen Donald McEachin and Bobby Scott, Lt. Gov. candidate Justin Fairfax, incumbent Attorney General Mark Herring, outgoing Gov. Terry McAuliffe, and Richmond Mayor Levar Stoney. Northam was the final speaker before President Obama, and sat to his side as the former President spoke to the crowd. 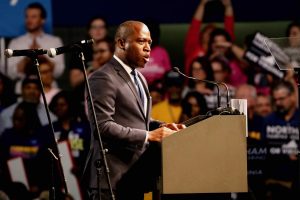 When Northam spoke, he compared Gillespie’s campaign to that of then-candidate Trump’s. “We saw a campaign in 2016 based on bigotry, hatred, and fear. We’re seeing policies come out of D.C. like the travel ban, reversing DACA, pulling out of the Paris accord, things that are totally un-American. Unfortunately my opponent Gillespie is cut from the same cloth as Trump. He is a lobbyist from D.C given power.We cannot accept that this is the new normal. We’re going to get back on the offense and stop playing so much defense.” 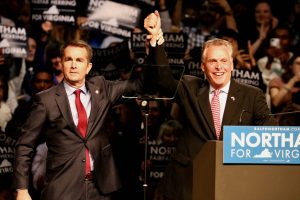 Before introducing President Obama, he ended his speech on a positive note. “By 2030, we have a great opportunity to have 30 percent of our energy come from renewable energy. We can make it happen. People tell me they want streets without guns. We can make that happen.” Northam concluded with, “We live in a diverse society, we should be inclusive. It shouldn’t matter the color of your skin, your sexual orientation, your religion. We welcome all to the Commonwealth,” talking about some of the basic pillars of the Democratic party, and asking for a commitment. “Are you ready to fight with me?”

The polls have narrowed from a comfortable lead for Northam to a single-point victory for Gillespie, but Gov. McAuliffe, speaking earlier in the night, was optimistic. “Four years ago, just about this time, Obama campaigned for me when I was running for governor. You worked your heart and soul out to get us elected and I want to say thank you. We broke a forty-year trend to win the governor’s office and we’re going to do it again with Ralph Northam,” he said, predicting a McAuliffe win.

Gov. McAuliffe defended his record and promised more of the same from Northam, listing economic accomplishments and actions against discrimination on the basis of sex, religion, and race. “I own the record for the most vetoes in history,” he said, referencing discriminatory legislation he has refused to sign. “I told the legislature that if you send me bills that limit the rights of women, LGBT people, that put more guns in our society, harm the environment, I will veto the bill. I restored the rights of returning citizens to make them feel like real citizens again. The Republicans sued me twice, but that didn’t bother me because I was working to restore rights.” 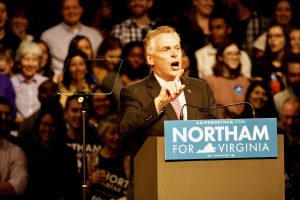 Richmond Mayor Levar Stoney used his turn to ask voters to come together and make a choice, highlighting the stakes of the race. “We have 18 days left. We can go backwards or forwards. There are those out there that seek to divide us. The Gillespie team seeks to divide us. We can tell them that our voice matters more than the NRA. Our voice matters more than Donald Trump. We have a choice. Democracy is made of people. It’s made of good elected officials.”

The rally seemed to be a successful effort to inject excitement and energy into Northam’s campaign. But more importantly, it was also an attempt to recruit some of the young voters that voted for Northam’s challenger, Tom Perriello in the primary. Thousands lined up for admission, with early birds arriving at 7 a.m. for an event that began at 5 p.m. Many of the attendees were drawn by President Obama, one of the most popular presidents in US history, and said his endorsement had made them consider Northam. “I’ll vote for Northam,” said one woman who asked that we not use her name. “Whoever Obama told me to vote for, they got it. It’d be hard, but I’d go in there and vote for Trump if he told me to!” 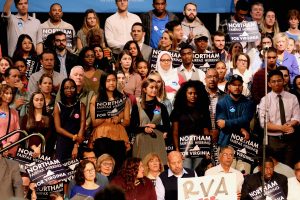 Young People Sharing the Stage with Obama and Northam

Some attendees hadn’t really considered Northam before the event. “I’m here because somebody gave me a free ticket,” said Eric Torres. “I’m here to see Obama. After this rally, after hearing Obama speak, I’ll probably vote for Northam.”

Others came for Northam, citing personal traits and redistricting concerns. “I’m here to support Ralph Northam and maybe to see Obama,” said Tracy Bowers, a lifelong Richmonder. “I support Northam because he’s a good, decent, kind person. I feel like I can trust him — he has a moral and ethical code that I appreciate. I think he cares about us.” 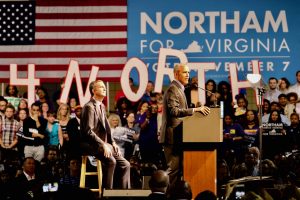 Bowers was familiar with Gillespie’s role in REDMAP and was generally critical of the district system in Virginia. “It’s not representative. It’s a horrible system,” she said, expressing a sentiment that President Obama would later share.

Another person at the rally disparaged districting as an elitist system. “I think districting in general defines communities based on ethnicity and poverty levels. It divides communities. Ultimately, it only benefits leaders,” said Andrew LaFontaine, who described President Obama as an inspirational figure and a leader. “The turnout today speaks volumes to the fact that people still look to Obama as a leader.” 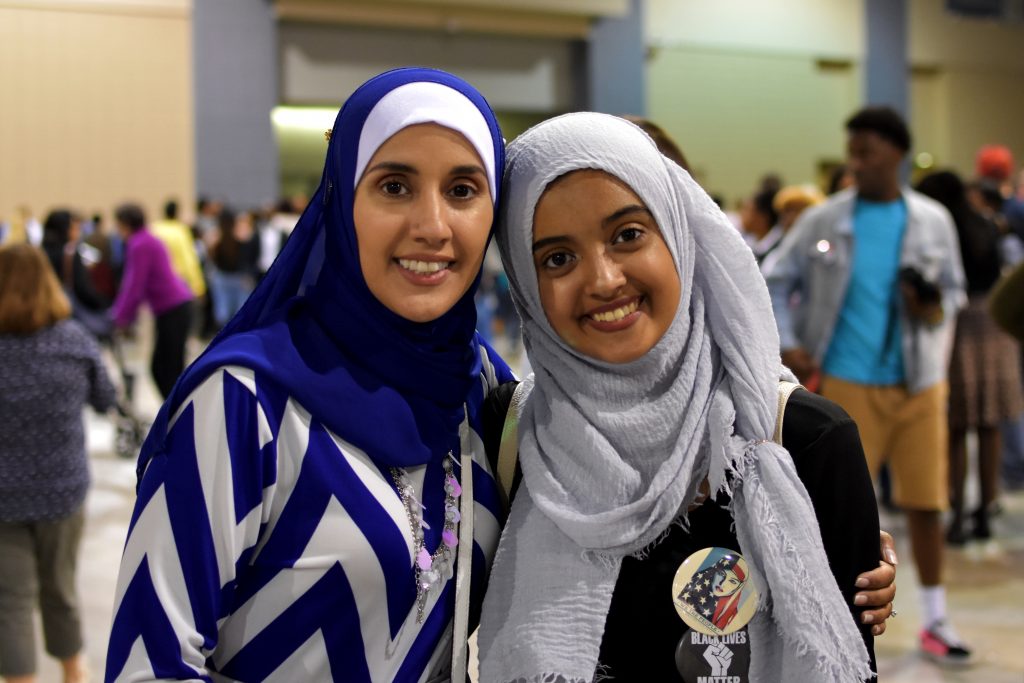 Some voters had an even stronger reaction; one woman brought a friend over to relay her experience. “I nearly passed out,” she said, talking about how she felt seeing President Obama. “I had to put my phone down, I had to take a break.”

Others were a little more restrained. “Of course I was excited,” another woman said, shrugging before she left the convention hall.

The statewide elections will be held Nov. 7. Prospective voters can check their registration or lookup their polling place on the Virginia Department of Elections site.

*Nidhi Sharma contributed to this report. All other photos by Landon Shroder. Cover photo by Branden Wilson