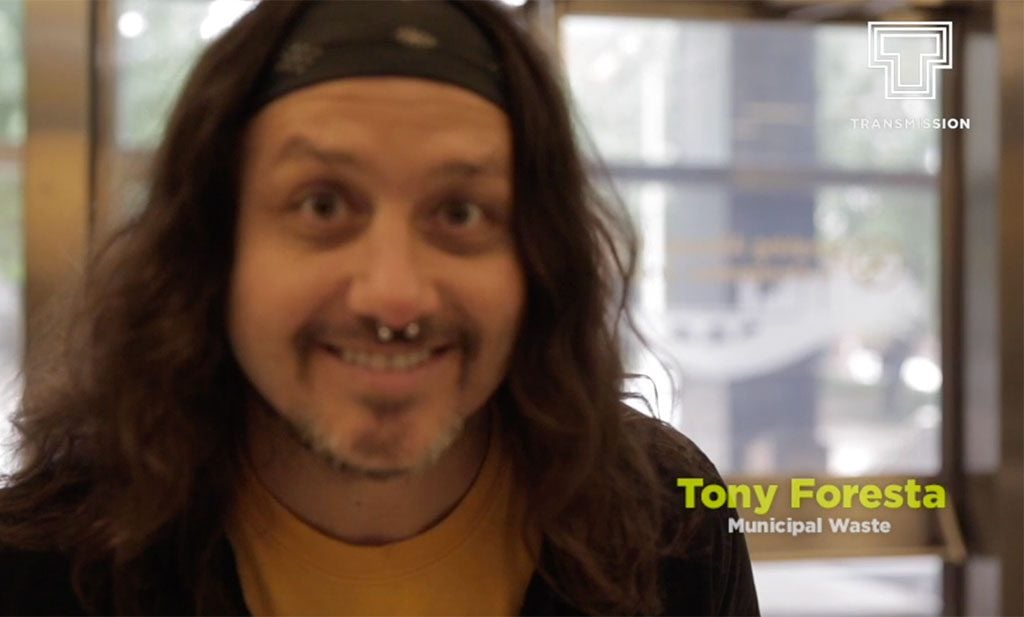 Politics is always at its best when it can be accessible to everyone. A person should not have to be a journalist, hold a PhD in political science, or be linked to special interest to have a candid conversation with their elected officials about what is important to them. Knowing this, having a mayor in Richmond that understands the benefits of forging a sustainable relationship with the arts, culture, and music community is worth something.

Which is why Tony Foresta from Municipal Waste / Iron Reagan interviewing Mayor Levar Stoney is so fucking awesome. Because both are innovators and sometimes the best conversations are spawned by bringing diverse people together.

That’s not to say that Stoney should get a pass on the endemic challenges this city still faces over public education, transportation, race relations, or economic opportunities. Quite the opposite, yet as we try and make sense of the endless complexity of today’s politics being able to facilitate dialogue in unexpected places allows us to conquer the perceptions and divisions that constantly hold us back.

Given the intersection of politics and culture these days, RVA Mag wanted to make the rest of the questions available to our readers. Stoney’s take on the art and food scene, his favorite music, the Redskins, and even the white supremacist incident in Charlottesville all cast a light on how Richmond’s new leaders are evolving and adapting to the current conversation.

Tony: Why do you think creative people from D.C. and Virginia Beach move here?

Mayor Stoney: You don’t have to deal with the rat race you may have in northern Virginia and D.C. People move to cities and places they think they can relate to. Here, I think we can relate to just about anyone. You come here for the tech industry, you come here for the arts, or for government and education – we have all that. My job as Mayor is how I go about keeping them here. So when they get older, like me, do they decide to stay in the city or go somewhere else? I want them to stay right here. They’ve all had other cosmopolitan experiences. They’ve been to DC, Boston, or they’ve been to San Francisco, but they live here – they reside here. That’s because of all we have going on for ourselves.

You may not know this, but last week the Wall Street Journal did a story which had Richmond on the list of top cities with the highest concentration of 20-29 year olds – we were number six on that list. It was Madison, Pittsburg, Salt Lake City, and Boston. That’s huge. That says a lot about the future of Richmond.

Tony: Straying away from the arts, let’s talk about sports for a second. You’ve been a supporter of the Redskins Training Camp in Richmond while most of the candidates you ran against were not. You said you wanted to get more bang for Richmond’s buck. How have you been going about doing that since spring training is right around the corner?

Mayor Stoney: I’ve had a number of meetings with the Redskins. I told them, ‘You know what? I know you want to be in Richmond, we want to keep them in Richmond, but the only cost can’t be on the city and its residents. There has to be a cost for you all as well because this is a great place.  We’re still in conversation about how we can work out the current deal. I actually inherited a deal that was made already. I don’t think I would have made the deal the same way, but we’re working on ways where we can change the current outcome and I’m optimistic.

Tony: So, I’ve seen you around town a lot. We’re just talking about restaurants where you like to hangout. You go out in the evenings and support local businesses.

Mayor Stoney: I do. I hold a lot of my meetings in local restaurants.

Tony: So, what are your spots?

Mayor Stoney: Rogue Gentleman is up there, Saison is up there, actually I like Bacchus every now and again. Roosevelt is also a great spot for me, you may catch me there or Fat Dragon.

Tony: I saw you at Dinamo, though. What’d you think of Dinamo?

Tony: This is a legit question, which just came to mind. You were talking about how important the arts were to Richmond. I see Richmond as a younger version of Austin, Texas, but the problem with Austin is that everything’s getting pushed out. Arts are what made Austin what it is, and it’s such an important place.

Mayor Stoney: I’ve heard it. I was in Las Vegas this past week and a lot of people said, ‘Richmond reminds me of a younger version of Austin.’ When you think about places like Austin or San Francisco or New York or whatever, it kind of prices out the creative class.

Tony: Exactly, it takes away from the culture.

Mayor Stoney: One thing I recall, the whole open fire at the Ghost Ship and the reason for that was the affordability for housing in Oakland. The same thing is happening in places like San Francisco as well. I’m always saying, ‘How can we avoid a situation like that?’

I think when people want to go to the city and engage in our art scene and arts community this is where they want to come. Henrico’s great, Chesterfield’s great, but I want to keep the talent we have in the city. There are artists in our region that live out in Henrico and Chesterfield, but if they want the full effect, it has to be right here in the city.

Mayor Stoney: Someone asked me a question similar to that the other day. That was the most overt racist act I’ve seen in a very long time. It was reminiscent of the early 1900s, ‘20s, and ‘30s, just minus the robes and the hoods. I’ve never seen anything like it before.

I think the response has been appropriate in Charlottesville. They’ve done a great job driving the conversation after something like that happens. Charlottesville, just like Richmond, is an inclusive tolerant place that embraces diversity. They’ve stood up and said, ‘We’re not going to allow or tolerate this sort of nonsense in our city.’ At the end of the day, if we still want to be in the competition game for millennials, for young people, and for newcomers in general, they’re not going to go to a city where those sorts of acts are tolerated. That’s not the sort of city Richmond is. It may have been in the past, but we’re writing a new chapter here in the city together.

Tony: So, I’m about to leave for two and a half months with my band Municipal Waste.

Tony: Vegas, Vancouver, and then I come home for a few days, then a full U.S. tour for two and a half months. So, is there any way you could appoint me to be Richmond’s party ambassador?

Tony: Can I get like a sword or a cape or something?

Mayor Stoney: Like knight you [makes knight gesture]? You want a key to the city or something like that?

Tony: So, yeah. Appoint me?

Mayor Stoney: I thought you already had a job.

Mayor Stoney: Thanks, Tony this has been great.

Tony: Thank you very much, its been an honor. Cheers.