Virginians Spending the 50th Anniversary Of Earth Day At Home

In the midst of an outbreak, the ongoing climate crisis has faded from many people’s minds. But cleaning up our environment is still important — as long as you do so in a proper socially distanced way.

On Earth Day’s 50th anniversary, people all over the world will be occupied with a different kind of global crisis. Preventing the spread of the coronavirus has become a top priority — and a large litter producer.

Today is Earth Day, but in Virginia, it will not feature any neighborhood or corporate cleanups, political rallies or community picnics. Gov. Ralph Northam has ordered all residents to stay home with the exception of absolutely essential activities, such as grocery shopping. Litter cleanup organizers all over the state are lamenting the cancellation of annual events that bring in some of their highest numbers for the year.

“Usually, we’re really busy this time of year,” said Jen Budlong Cole, Executive Director of Clean Fairfax. “So it’s a bummer that this is happening now, because we’re not out there doing all this great work.”

Clean Fairfax usually gets about six or seven 300-person cleanups in April every year, according to Budlong Cole.

At a time when cleanups are decreasing, there is also an increase in certain types of litter. Protection from COVID-19 requires many single-use products. Gloves, masks, plastic cleaning supplies, bottles, and wipes are all disposable items recommended for reducing the spread of the coronavirus. Some of these items are not even making it to a trash or recycling bin.

“There have been reports regionally as well as nationally that personal protective equipment (PPE) is increasingly becoming a litter problem, posing a threat to the environment and to those who pick them up,” Katie Cullipher, Principal Environmental Education Planner for askHRgreen.org, stated in an email.

While some residents are leaving their trash behind, others are using this time at home to spruce up their neighborhoods. Clean Fairfax and other environmental organizations around the state have seen an increase in individual and family trash pickups. Budlong Cole says many families have reached out to tell her they have been going around their neighborhoods and picking up trash.

“People are just out, and they’ve got like a little grocery bag. And they’re picking up stuff as they walk along — wearing their gloves, just like they should,” Budlong Cole said. “So that’s really nice to see.”

Amy Robins with RVA Clean Sweep has made all of their cleanups self-directed, meaning that interested participants will have to go out on their own instead of attending group events. Robins has a tote of disinfected trash pickers set out for people to borrow for their litter pickups. She has also seen a steady interest in litter cleanups.

“Some are from people who regularly volunteer,” Robins stated in a direct message. “Others are just noticing how much litter is in their neighborhoods now that they are walking more.”

Robins suggests that people avoid touching their faces while picking up litter, and wash their hands thoroughly afterwards.

“If someone is doing a litter cleanup they should wear protective gloves, avoid touching their eyes, ears and mouth, use hand sanitizer, and wash their hands thoroughly when finished,” Cullipher said.

Cullipher says most cities and counties in Hampton Roads are not promoting trash cleanups right now.

“Supplies that would normally be available to assist with cleanups are generally not available due to social distancing measures, as many employees are working from home,” Cullipher said.

Robins has decided to avoid the crowds this year and not go out and do trash cleanups around Richmond or along the James River.

“Sadly, most people can easily fill a bag of litter from their own neighborhood within 60 minutes,” Robins stated. “You do not need to go to an overcrowded park to celebrate Earth Day.”

Budlong Cole is also staying home and trying to lead by example and follow the governor’s stay-at-home order the best she can.

“In these pandemic times, I really encourage people to not travel to go find trash,” Budlong Cole said. “I guarantee that there’s trash within walking distance.” 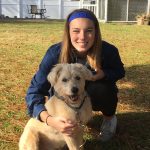 Emma is a senior Print/Online Journalism major at VCU. She is interning with RVA Hospitality and writing blog posts for them this summer. In her free time she likes to spend time at the river and eat good food.